A friend of Mr Mustard parked where the above sign is to be found in Replingham Road. SW18. Let us call him Mr P. He runs a business and drives all over London most weekdays to supervise the progress of various works. He isn't computer literate although does have a smart phone and his preference is for paying at the meter. Mr P generally pays when he should pay.

At this location, there wasn't a meter to pay at and so payment was not made and a PCN was the resultant outcome.

Mr Mustard made a simple challenge:

'There wasn't a parking meter in the direction of the arrow shown on the sign.'


Simple enough for the council to show there was a meter or to cancel the PCN, one would think? Er, no. 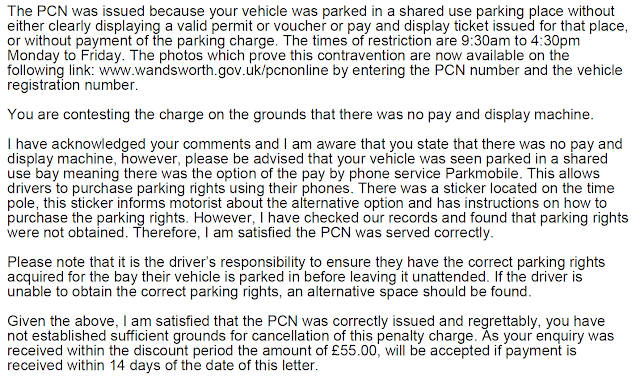 The writer may well have been satisfied, self evidently easily satisfied, but Mr Mustard wasn't. What was missing from the reply? Yes, a statement of the location of a parking meter.

Is a wraparound sticker on a pole good enough? It is a sticker which Mr Mustard didn't notice initially, because the Traffic Signs Regulations and General Directions 2016 do not sanction stickers as a valid sign format, so it is of zero legal validity.

There was a bit of a dire warning on the next page of the letter that you are risking having to pay an extra £55 if you fight on and lose.

'There wasn't a parking meter in the direction of the arrow shown on the sign.'


Consistency pays once you reach the tribunal, if you do. A month after the making of the formal representations, Wandsworth Council responded:

The first paragraph is a waste of time, everyone knows what the PCN was issued for but councils just can't stop trying to justify their actions even when they are plain wrong.


The second paragraph recognised what Mr Mustard knew was fact in the first place. What it does do is make the first rejection look like a cynical attempt to obtain payment for a PCN when the council had removed the meter and not updated the bay sign to reflect the fact that the only method of payment which was possible was by using a telephone. It was dishonest of them and many a motorist not represented by Mr Mustard would have paid up. Mr Mustard suggests that you never accept what a council says at face value but stress test it instead and use the internet to help you. Free help is always available for all sorts of problems with authority at PePiPoo. The link is to the council PCN forum but there are others for speeding and private parking charges etc. things that Mr Mustard does not involve himself in.

The signs in Wandsworth should all be changed, it isn't like they don't make millions out of parking tickets, they have a duty to erect signs which accord with Traffic Management Orders. Mr Mustard thinks he had better send a complaint to the Chief Executive.