are Barnet Council helping soften the financial effects of Covid-19? (Don't be silly!)

Here we go, this is how you soften the financial effects of Covid-19, this offer is in respect of a PCN which Mr Mustard has fought all the way to the tribunal (telephone hearing next week) and although it will cost the council a £30 tribunal fee that they cannot recover, and bundles of time in putting the evidence pack together, they have spontaneously offered to graciously accept 50% even if they win (they get nothing if they lose) thus giving away a potential £65.

Mr Mustard senses your warm feelings about Barnet Council being so understanding despite you knowing their history as ruthless, venal and rapacious (copyright 'Fras' a.k.a. 'Incandescent') and Mr Mustard is sorry (no he's not, you need to understand the enemy) to burst your bubble but the above concession was by Tower Hamlets Council. What Barnet are like follows.

Parking enforcement restarted in residents bays on Monday 8 June.
On Wednesday 10 June a traffic warden had spotted a car without a permit in a residential bay.
They could have issued a zero value warning PCN for £0.00
They issued a code 12 higher rate PCN for not having a permit, for £110
They could have issued a code 19 lower rate PCN for having an expired permit, for £60.
Given the 3 choices they chose the one which would make the most money (except that thanks to Mr Mustard it probably won't, it will cost them £30, the tribunal fee when they lose).

On 10 June the motorist make their informal challenge:

A clearer request for clemency and for Barnet Council to use their discretion it is hard to imagine. Did it move Barnet Council? Did it make them think long and hard? No, of course not, the rejection letter was issued the very next day, using a lot of words when two would have done, the second one being 'off'.

Para 1: 'We have carefully considered' - it doesn't look that way.

Para 2: 'Will be issued' - that is an option but speaks volumes about council attitude.

Para 3: The motorist told the council this, they don't need it repeated back to them. Note that as soon as they were made aware of the oversight the resident corrected the situation. The CPZ is meant to protect residents but one major side effect is that they suffer a penalty for any minor infringement.

Para 4: The motorist would have found it helpful if telephone numbers and web addresses had been provided. You would think the council would have the numbers to hand thanks to their own situation?

Mr Mustard thinks that the cursory rejection is a reflection of the desperate financial straits in which the council has found itself, partly thanks to a historic over-reliance on PCN as a major funding stream. £10,900,000 of the shortfall is parking or PCN related.

In his immediately prior blog published earlier this morning Mr Mustard brought to your attention changes to parking permits to support Covid-19 recovery. That delegated powers report was signed off by the parking manager on 22 May. A fortnight is a long time in politics apparently as its existence has been forgotten. It contained this: 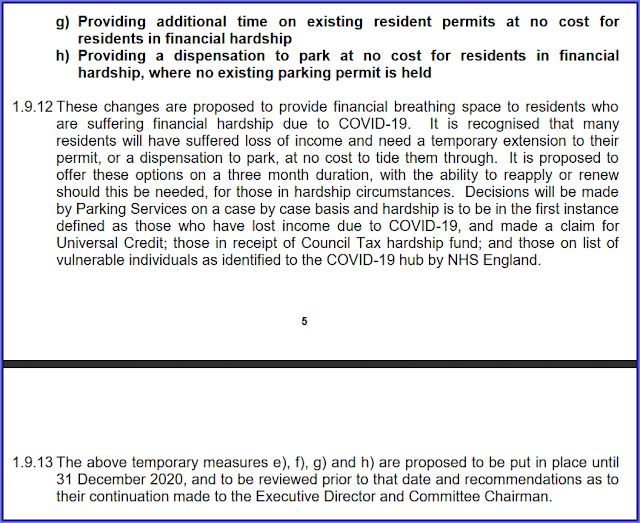 What Mr Mustard doesn't understand is why the rejection letter was even issued, why wasn't it a letter saying the council were sorry to hear of the financial pressures the resident was suffering from and did they qualify under the defined hardship criteria (possibly not but they should have been asked) which shouldn't be interpreted too exactly but flexibly. If a two income household loses 20% of one person's income that could be enough to leave them short overall.

Never forget that it is all about the money. You are not a bad person if you forget to renew your parking permit, you were under acute pressure at the time.

Mr Mustard
Posted by Mr Mustard at 8:30 am