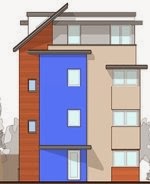 As far as Mr Mustard can tell the above building was approved in 2011 for the bottom of the garden at 69 Jackson Rd and will tower over the lovely cottages in that road although some planning matters still have to be considered.

Given his opposition to the Cat Hill development one would expect Cllr Robert Rams to have opposed this over-development in his own ward but he hasn't spoken against it, so far as Mr Mustard is aware. Robert might have some trouble getting votes in Jackson Rd next May if this sort of over-development gets voted through.


Two separate ‘planning applications’ have been submitted to Barnet Council for a 4 and 3 storey block of flats behind number 69 Jackson Roads garden.

If you do not ‘object’ to this proposal within 21 days then one of the block of flats will be built.

Jackson Road is made up of traditional railwayman’s cottages and is a unique road with architectural merit; by letting developers build what they want where they want will destroy the areas charm and well being of people who live near the proposed site.

The developers do not live in Jackson Road or the area and do not care about the negative effects this block of flats will have on the good people and families that make up our great community.

All they care about is the large profit of cash if planning is given, even if that means making us sad and depressed.

They do not care about – the loss of natural light / loss of privacy / loss of quality of life / extra pollution from extra cars and vans / extra noise from 4 flats – human noise, boiler noise /

a negative effect on house prices because of this eye sore / possible flooding sewage and subsidence problems to other properties because of building on this site / a major threat to wildlife in the immediate area including bats, etc

If you are against more major development on or around Jackson Road which is already built up and unable to accommodate any more cars as well spoiling an architectural and historic part of East Barnet, then say no.

If writing a letter you need to add your name, address, daytime telephone number and email if you have one and quote the Planning application reference –

If you have any further questions please contact Ms. Mumtaz Shaikh , the person from Barnet Council dealing with this, at email -
Mumtajbanu.Shaikh@barnet.gov.uk