Is "confirmation" past or future tense? 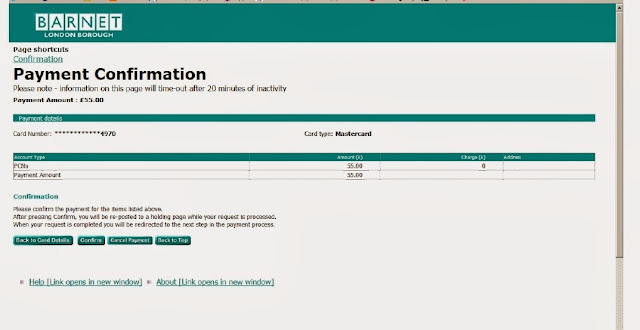 The above page, on which Mr Mustard has cancelled his £55 payment, confused Mr L., as the following adjudicator's decision shows:

Mr L. attended the hearing. The Enforcement Authority was not represented.

Mr L. accepts that the contravention occurred. He believes he made payment of £55 the following day via the council's website. He produced a confirmation printed on 15 May 2013. The authority's position is that they did not receive any payment. Mr L. accepts his account was not debited.

The Authority is only obliged to accept payment of the discounted penalty if payment is made within 14 days of service of the Penalty Charge Notice. The amount is paid when it is received. The full amount becomes payable thereafter. That is the legal position. The authority does have discretion to extend that period.

In this case, payment was not taken because Mr L. had to press the "confirm" button before the transaction could be authorised. The heading on the form stating "Payment Confirmation" is confusing and does lead users to believe that payment has in fact gone through. The authority would be well advised to change this heading to avoid such situations arising in future. Mr L. was clearly not intending to avoid payment and the wording is not helpful. I would therefore strongly recommend that the authority now accept payment of £55 for this Penalty Charge Notice.
What did the council do? they rejected the recommendation within days (don't think too hard about it, will you?)

Should they have? Well, arguing their case as devil's advocate they will say it does say confirm at the bottom but it doesn't exactly leap off the page at you, does it? The largest print is "Payment Confirmation" which could easily lead you to think that payment has been made. On the previous page you had entered your name and address and credit card details including the cvv code so no extra data was required to process the payment, thus Mr L's mistake can be understood.

What should the council do now? Stop being so mean to a person who made an innocent error would be a good start and then change the colour of the confirm box to another colour, perhaps red so that it stands out and change the heading to "Please confirm your payment" as suggested by the adjudicator.

Mr Mustard predicts that these changes will be made before Christmas as they are easy to do and as the council read his blog and his tweets.