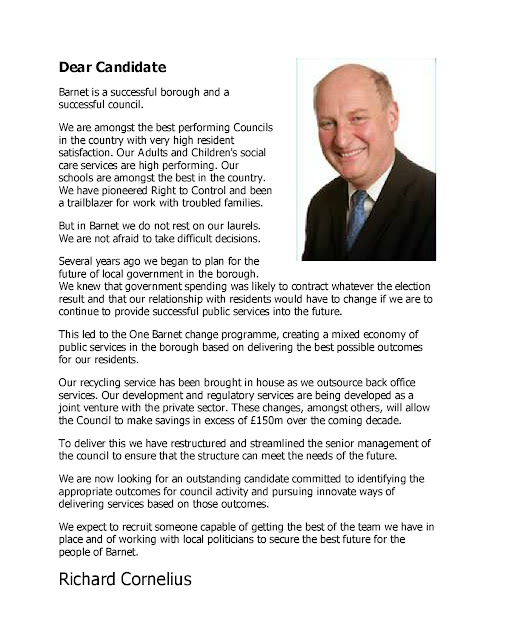 Call Mr Mustard picky if you like but one can't conflate Barnet the place and Barnet Council the council. The first line isn't properly expressed. Barnet is a place not a council.

Hopefully none of the candidates will have been under a stone for the last few years and will know that Barnet is not a sleepy backwater. It is easy to pick out odd areas of success but what we want a CEO to tackle are the areas of failure. For example it was only on Friday that we heard that 6 former parking employees had, with the help of Unison, won their claims for unfair dismissal when their jobs were TUPE transferred to NSL who moved the jobs to Croydon and Lancing such that it was impractical for the employees to retain their jobs. When posts do have to be made redundant the staff are meant to be given details of other vacancies in the council which makes sense for both parties as the employer can perhaps fill a vacancy without paying a recruitment consultant and the employee can use his knowledge of how the council works to help a different department and keep his/her job. The council failed to notify vacancies properly and are having to pay out thousands in compensation, as reported here in the local paper.

So it looks like the new CEO should put the better treatment of staff higher up the priority list but that will rub up against the political decision to sign 10 year contracts with private providers.

Ha Richard "not resting on your laurels" which means "relying entirely on long-past successes for continued fame or recognition" so you admit that any success was a long time ago. I agree that you do take difficult decisions. They are very difficult for the people you make redundant by the hundred and often are also the wrong decisions.


Looking at your statement "our relationship with residents would have to change" Mr Mustard looked at the Residents' Perception Survey 2012 and the question "To what extent does the statement - Is doing a better job now than one year ago - apply to your local council" led to the following responses:

which leads Mr Mustard to conclude that the relationship of the council with residents is indeed changing, it is getting worse.

The One Barnet programme is not based upon delivering the best possible outcomes for residents. It is mostly based upon privatising services which leads to job losses and pay cuts for staff. Jobs are only kept in-house if that is the cheapest option or if the political fallout from doing otherwise would be too hot to handle. Try asking the residents of Friern Barnet if they think closing their library was the best possible outcome, or the many people who used to like visiting Church Farmhouse Museum or the supporters of Barnet FC whether Copthall being virtually gifted to Saracens was the best outcome? and one is likely to get the answer "No".

You have somewhat accelerated the bringing back in-house of the recycling service Richard. It won't happen until October so you should have used the future tense.

Are we still doing a JV on DRS? It is hard to keep up with changes in the status of any part of the transformation programme; it is as if policy gets made up on the fly.

You are over-egging the pudding with "will allow" when you talk about savings. You might recall you still owe me an answer from November about the parking service outsourcing that went way off the rails and needed a top secret improvement plan to get it back towards the rails.

"Streamlined senior management" does sound lovely and idyllic. Let us take a look at it and see if it looks streamlined.
Barnet Council Management Structure at April 13 by MisterMustard


Mr Mustard hopes you followed all of that as he doesn't and he thinks that tasks are going to be missed because everybody will think it is someone else's responsibility. There was nothing wrong with having silos i.e. departments. Everyone knew what they were responsible for.
"pursuing innovate ways of delivering" is a typically sloppy piece of writing. Mr Mustard guesses that Richard meant "innovative" but that Richard didn't read what was written in his name very carefully, if at all?
"The best future for the people of Barnet." That will be in May 2014. Vote this shower out of the Cabinet.
Yours frugally
Mr Mustard
Posted by Mr Mustard at 7:29 pm