How big is the loss - Your Choice!

The point of asking questions at full Council meetings probably isn't to get answers as just like at committee meetings the answer is something that the questioner has no control over. It was Brian Coleman (quiet at the moment isn't he) who told a questioner you may not like the answer but it is the answer. The knack is to carefully phrase your question to allow no wriggle room and to have a killer follow-up question ready. Here is a recent question which Mr Mustard decided to explore further as he felt the answer was a bit woolly:

Mr Mustard doesn't suppose you are much clearer now? The year in question is the one ended 31 March 2013 in case you were wondering.

So let us go back to 2011 when the idea of putting the social care services into a Local Authority Trading Company was a twinkle in someone's eye. Here are some budgets from 2011 from the "original Business Case". 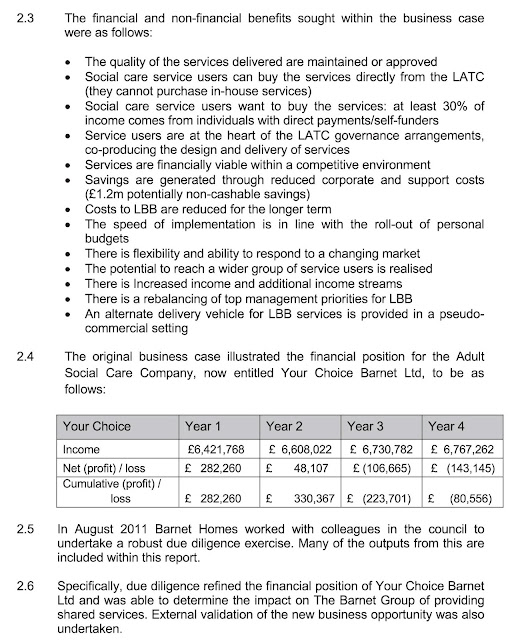 So you can see that after 4 years of trading Your Choice would still be loss-making.

That must have displeased someone because the numbers got sexed up a bit and by the time they were agreed by Cabinet Resources Committee in February 2012 they looked like this: 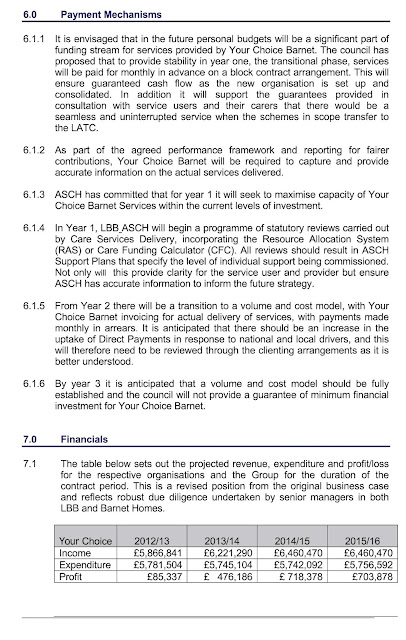 Now those projections are whole lot better aren't they? The trouble is they are only on paper and evidently pie in the sky. A projected profit being made of more than 10% in year 2015/16 out of the most vulnerable people in society. What sort of council has been elected in Barnet? Aren't they there to provide a safety net for the vulnerable using the resources given by the better off and the working well? Mr Mustard can't see any excuse for the projections being massively out as this is not a new venture just a spin-off from the council and all the historic financial records would surely be in the "wonderful" SAP system or in spreadsheets kept by managers.

The above two sets of figures were from the 14 February 12 board meeting of Your Choice. The next set are from the 12 September 12 meeting. The board meetings are public. You can just turn up at Barnet House at 6pm although Your Choice weren't very welcoming when Mrs Angry and friends turned up for the last one. The next one is on 22 May 13 at 6pm. Do please go along and support any bloggers and carers who just might be there. Barnet House is the old Ever Ready building in the High Rd at the junction of Totteridge Lane, N20. Ignore the suggestion on the Your Choice website to phone first as it isn't as if they provide a buffet and need to sort out the catering arrangements; it is a public meeting which means anyone can wander in off the street without notice. 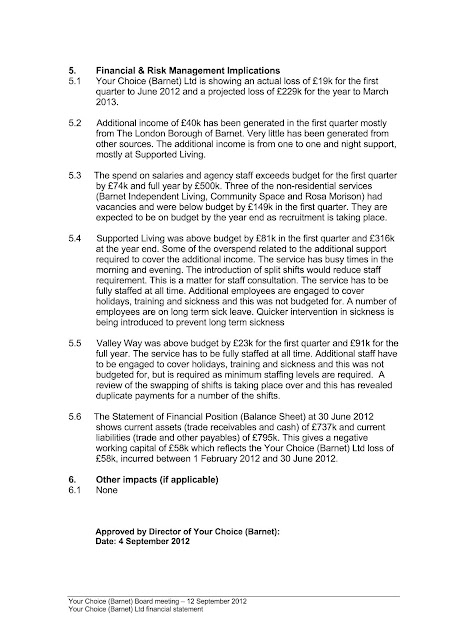 As ever Mr Mustard finds fault with the figures but only because they are toffee. In para 5.1 it says the loss is £19,000 and in para 5.6 it says it is £58,000 - only one of those figures can be correct. Whichever is correct is is unsurprising that a start-up company is in loss. Mr Mustard wonders if sufficient regard was given to transition costs. On the new arrangements for cctv that are currently being discussed transition costs are more than £200,000 and implementation costs are also over £200,000 and together for the in-house option they come to £556,000 just to replace a few cameras, nothing like as complicated as services to disabled residents.

So here we go with a summary of what year end profits or losses we have been presented with during the last 2 years, profits in black and losses in red. Then you will have to decide for yourself what you believe. The early numbers should have been rounded to the nearest thousand as you can't predict the future to the nearest pound.

Mr Mustard will hunt down the final position and let you know what it is.

On Thursday 25 April at 7 pm (Greek Cypriot Centre, 2 Brittania Rd, London, N12 9RU with free parking in the road at that time) is the first organising meeting in regard to Your Choice and the significant issues it raises for people with disabilities in our borough. Do go along if you are interested.

If you enjoyed this blog you should also read what Roger has got to say over at the Barnet Eye.

Email ThisBlogThis!Share to TwitterShare to FacebookShare to Pinterest
Labels: barry rawlings, loss, no choice, sachin rajput, sexed up, your choice