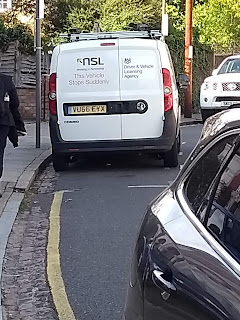 Mr Mustard has caused some right consternation. Should he have kept quiet?

On 5th October Mr Mustard was on his way up the street when he stopped to chat to a neighbour for a moment. He saw the NSL / DVLA clamping van stop & decided to watch what they were doing.

What happened next was curious. The NSL van driver got out, ambled up the street to a particular car, put a red notice on the front & took a photograph, moved the notice to the back and took another photograph, removed the sign and ambled back to his van. This was rather odd but Mr Mustard assumed it was gathering proof of the car in use on the public highway and the photos would be evidence of a warning having been served.

Mr Mustard knows most of his neighbours but this car was a new one to the street so Mr Mustard guessed it must belong to the tenants who had just moved in. He knocked on their door, no answer. He knocked on the neighbours' door, went in for coffee and explained the situation as they were likely to see the owner first. Mr Mustard was trying to stop the car from being clamped, a check of the on-line register showing that it had recently expired road fund and no MOT. He also put a polite and helpful, or so he thought, note on the car. Two days later it had an MOT and road fund.

He thought no more about it until yesterday when Mr Mustard received the below email which came from the senior partner at a local firm of Solicitors (if that was calculated to bother Mr Mustard, it doesn't) being the neighbour in question.

Mr Mustard was a mite peeved at this outrageous lie that he was a DVLA snitch so he emailed back.

Your letter is most unfortunate.

I did not inform the DVLA that you fiancée's car was untaxed, nor as it happens that it didn't have a current MOT.

My attention was drawn to the car by the interest taken in it by the DVLA clamping van as per the below photo.(now above)

My motivation was to be neighbourly and let you know so that the car did not get clamped. I knocked on your door that day (5 October) but no-one was at home.

I made no moral judgment about why the car was illegally parked, unlike yourself who thinks he knows what my motivations are and you know nothing of me as a person.

I strongly suggest that you do not make unwarranted accusations in the future, as it is unprofessional conduct unbecoming of a solicitor, and I look forward to receipt of your unreserved apology.

Another email arrived from from the man who can't spell fiancée (fiancé refers to a man who is engaged - not many people know that).

Thank you for your email Mr Dishman. We have been provided verbal witness evidence of your involvement hence my email. If you were not involved, you may ignore my comments. If you were, then my comments stand and I make no apology for them.

Perhaps you could evidence the date and time of the picture you sent me  because redacted’s car does not appear in that photo?

I certainly do not regard my conduct as unbecoming of a solicitor but you are perfectly entitled to form your own judgement.

This whole episode smacks of some kind of snooper’s charter and I find that unacceptable.

Hold on a moment. You are now calling Mr Mustard a liar based upon the word of an undisclosed witness. That doesn't carry much weight. I have said I did not tell the DVLA (something the DVLA already knew). No-one needs to contact the DVLA to tell them a car has no road fund or MOT as they keep the register (which is publicly searchable). So Mr Mustard is sent a maybe yes maybe no email when he has already said he didn't do anything to cause the DVLA to pop round. They are all over the country all the time and know where to look.

Mr Mustard sent the photo, from which the time and date can be obtained in the properties, along with a renewed request for an apology.

I did not inform the DVLA.


I would welcome an apology for your false accusation.

Somehow he doesn't think it will arrive.

What would you do in your street, Mr Mustard's road is exceptionally (sorry, make that with one exception) a friendly place to live. Would you have been grateful that a concerned neighbour tried to stop your car being clamped by nudging you to get your MOT sorted and then buy some road fund.

Or would you send an email making an accusation that was untrue?

The joke is that Mr Mustard thinks this has come about due to a misunderstood distant conversation. Yesterday the car was parked on a dropped kerb with a single yellow line. It had been there for days and somehow not been ticketed. A friend of Mr Mustard's saw it and pointed it out from her window across the road to the lady owner who responded that she had a resident permit. It was gently pointed out that they don't apply to single yellow lines. There was some reference to the previous problem which wasn't properly heard and Mr Mustard got mentioned but at no time was it said that Mr Mustard had snitched to the DVLA.

Surely after you accuse someone of something and they deny it you have to take their word for it or produce the witness evidence? As it happens the probable witness is mad as hell and is going to have a word with the neighbours.