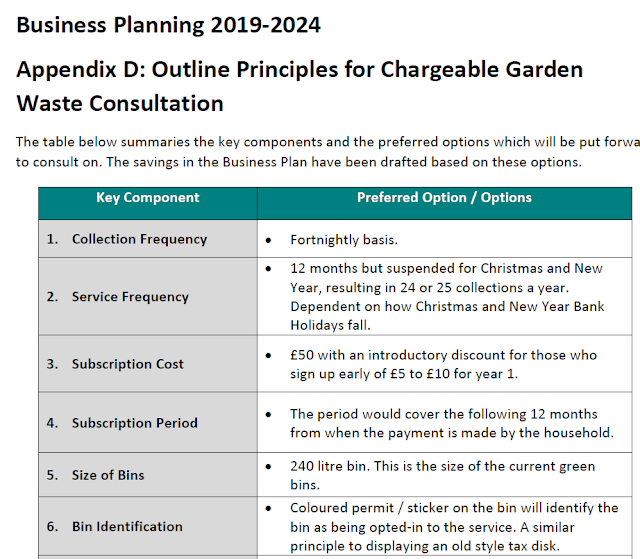 Hat tip to Mr Reasonable who assiduously reads council papers and then puts them to the sword if they don't make sense. You can read his excellent blog here. The above snippet is from the papers for the Environment Committee this Wednesday 28 November. Note the 6.30pm start (not the usual 7pm).

Update: 29 November 18. Mr Mustard attended the entire three hour Environment Committee meeting yesterday evening save for the first few minutes as traffic was awful in High Barnet and he couldn't escape. He missed a fraction of the first item about the bin fiasco. Later in the evening four conservative councillors out of 6 expressed reservations about the £50 green bin charge and then voted to go out to consultation on it. Bonkers. Mr Mustard presumes they want residents to give it a good kicking in the consultation so they can say they listen to the will of the people and proceed to make a different stupid decision.


Barnet Council worry more about saving money than value for money. The bin collection service is one that every council has to deliver by law to collect 'household waste' without charge. Doubtless lawn trimmings and the like come outside of that definition and hence why charging is being considered and as other councils have managed to introduce charges for it.

Mr Mustard wondered if the proposed charge was a fair one and to be fair he felt it had to be the actual collection cost + the green waste disposal cost.

He collected the statistics he needed.

Total cost of all waste collection in Barnet is budgeted at £5,909,350
There are 147,063 dwellings.
50% of dwellings have a green bin.
Thus an estimated 73,500 green bins
The North London Waste Authority processed 19,666 tonnes of green waste for Barnet last year.
The gate fee for green waste has been estimated at £60 a tonne.

If only 50% of households have a green bin and the collection frequency is half that of the blue & black bins, for every 100 blue or black bins being collected, there are 25 green bin collections.

So why do the council plan to charge £50 which is twice the actual cost?

Mr Mustard has over-estimated the costs in the council's favour.

The annual running cost of £5.9m includes collection of food waste which no longer takes place and was intended to save £300,000

The annual running cost includes the collection of waste from businesses.

He has probably over-stated the cost to dispose of green waste. The green waste tonnage included that generated from parks.

If this idea comes to fruition lots of residents will stop having their green waste collected. That will make the collection of lower quantities less economic and rounds will need to be changed again. Bin wars will start and bins with a payment disc on them being 'borrowed' by naughty neighbours. Grass clippings will be dumped into any bin left on or near the pavement at night. Green waste will be put into the bottom of the black bin, under general waste, where it won't be spotted as bins are emptied. Green waste will be dumped all over the borough No-one can prove who put it there unless caught in the act.

What is the point of a council?
To provide services, such as green waste recycling, to residents at a lower cost than they could arrange it for themselves.

How is this funded?
By council tax, a universal payment roughly related to usage of local services.
How does this benefit society?

Will council tax go down?
No, this extra fee is a disguised council tax, you will pay more for the same services.

Update: Mr Mustard was just throwing away his council tax leaflet for 2013/14 having decided to recycle his 2013 Barnet Council archive box (that will get the recycling rate up) when he noticed something. The budget for Waste Collection back then was £6.36m i.e. £400,000 more than currently, and there was a separate payment of £9.76m to the North London Waste Authority.

Therefore, the costs that the council would save by making you pay for your green waste collection are only £8.93 per bin per year for which they want to extract five times as much from you the long suffering council tax payer.

In all the circumstances Mr Mustard does not see how an extra charge of £50 can be justified.

He also sees what good value we get from our in-house service.
Posted by Mr Mustard at 11:41 am