There is fair bit of background reading as prep for this blog post in which Mr Mustard highlights the entirely avoidable financial risks that Barnet Council are taking, and which, if CPI rises, you, the council tax paper, will end up footing the bill for.

Exempt report with key commercial terms & risks of the lease

If you don't want to read the background, here is a summary.

Barnet Council wish to acquire up to 300 properties to use as temporary accommodation.

This will be cheaper than paying for temporary accommodation on the open market on an as and when basis (currently all the time as about 2700 families are homeless). So far so good (apart from the number of homeless families).

Where the venture gets risky is that an apple & pears calculation has been done which shows that borrowing the money from an institutional investment firm with which to buy these properties, sell them to the investors and lease them back, saves money on the temporary accommodation bill. Well of course it does as you are not comparing the things which should be compared.

What should be compared is the cost of borrowing the money from the Public Works Loan Board to the cost of renting from Touchpoint (Cheyne) as both end up with Barnet Council owning the properties, either now, or in 40 year's time, but with the right to use them throughout.

A 40 year fixed rate loan is available at 3%. You know your costs for the next 40 years, interest rates are near a lifetime low. What is not to like about a loan at 3%. At any time in the next 40 years it may be an absolute bargain.

The rental cost of 3.4% doesn't look awful, although it is at least 0.4% more than ought to be paid, except for the stinger. The stinger is that every year the rental cost is increased by the percentage rise in the consumer prices index (CPI) which means that Touchpoint get 40 years of extra return on their investment without advancing a single penny more. You try and get 3.5% on your savings. The Halifax are offering you 0.7% for a 2 year fix, which they will then use to invest in properties at mortgage rates of 3.3% to 3.9% which gives you some idea of the profits to be made if you can lend people money at a starting rate of 3.4%. The Halifax won't, of course, increase the amount they charge you interest upon, it will be on the sum borrowed which reduces as you pay, rather than increasing.

Here is a table which shows you how the rental costs rack up. 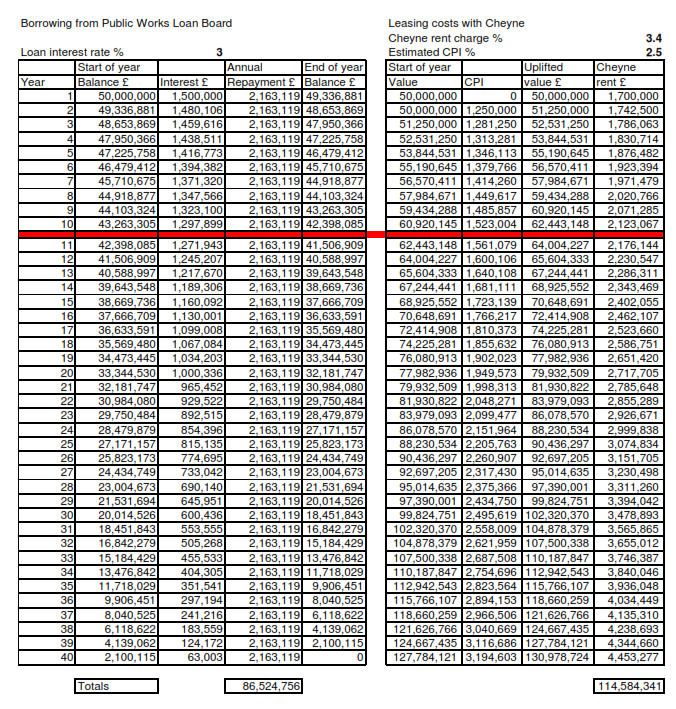 In the left hand set of columns the £50m capital is also being repaid. It isn't in the second set. If remove that then you can see that interest payments amount to £36m. If the sale and rent back option is taken with Touchstone then they give the council £50m at the beginning so the net cost of that is £64m.

This does not look like a good deal to Mr Mustard.

The red bar in the chart shows the cash-flow break-even. Renting has less outlay for the first 10 years, so is superficially attractive from a cash flow viewpoint, but after you have crested that hill it is downhill all the way for the  next 30 years.

The only way in which this could save the council money is if CPI gets below 1.2% and stays there for the whole term, which, given the history of the last 40 years, seems unlikely.

Mr Mustard has no axe to grind with institutional investors. He works in money himself (he is overseeing the recovery of a portfolio of mortgages of this quantum). They exist for one reason only. To make money. Touchpoint Housing (LBB) Ltd has not been incorporated yet nor has Cheyne Social Property Impact Holdings LP UK which is a company mentioned in the report. A similar named one was found ('UK' is missing)

Mr Mustard looked at the Accounts of Cheyne Capital Management UK LLP. The employees are ace at making money

and they don't get paid an average salary of £740,000 by being anything less than sharp as a tack. Sadly Mr Mustard doesn't think that the same applies to the project assurance team listed at item 10 in the Barnet Homes business case who are being danced around at council taxpayers' expense.

When you are buying something you have not purchased before, you try and assess what you should be paying. if the organisation you are buying from makes this sort of profit, you are paying too much and need to negotiate harder. 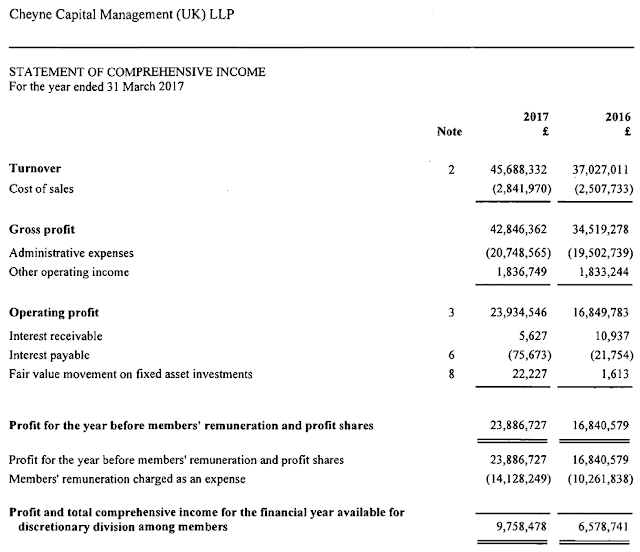 Yes, Barnet Homes looked around at other possible providers but if you cast your net amongst a selection of pike, you will catch a pike, not a goldfish (Mr Mustard would like to state at this point is that he is sure that the Cheyne group aren't doing anything wrong in any way, just doing what they should do, which is to make bundles of money. His comparison is a criticism of Barnet Homes & Council). Mr Mustard is concerned that there doesn't appear to have been a proper tendering process, all he sees mentioned is 'soft market testing and analysis of potential schemes with over 15 private funds...'

One of the aims in the Barnet Homes report is to get 'value for money'. This is not being achieved. He will follow up on all costs next July when the books of the council are open to annual inspection.

One worry is that the Barnet Homes report shows that the 40 year rental does cost more than straight borrowing from the PWLB but still they plough on.

The bigger worry is that the councillors who approved this idea, didn't understand the financial costs of rental as opposed to purchase.

The 'exempt' report (which Mr Mustard downloaded from the council website but doesn't seem to contain any exempt data) is also worrying. The structure of dealing through two intermediate companies adds complexity and unknown problems. The list of risks include potential vat liabilities, possible extra stamp duty (stamp duty land tax as it is correctly known) loss of control and extra administrative burdens & therefore cost.

All things considered, this is not a deal that the council should be doing. They are out of their depth.