It is hard to write a parking story without Helen Michael of Cafe Buzz, N12 appearing somewhere. So the above PATAS decision about Helen's PCN was made on 6 May. The council wrongly posted the evidence to Mr Mustard's client i.e. Helen, instead of to him. Once could be an accident.

On 20 May 2015 Mr Mustard again appeared at PATAS for a Ms S. The evidence pack was dated 8 May but not posted until 11 May and also sent to his client and not to him. Twice is a coincidence.

Mr Mustard has an adjudication hearing on Wednesday at London Tribunals for a Haringey PCN. He has not yet received an Evidence Pack. Is this the third time it has been sent to the client? = enemy action (from Ian Fleming's novel Goldfinger).

On 25 June Mr Mustard sent in a page and a half of formal representations about 2 PCN for a Dr. T to Haringey Council by the Signed for Service (as he doesn't trust any council not to "lose" his correspondence). The letter was accompanied by a scanned copy of an authority letter of standard wording, viz:

I confirm that Mr Derek Dishman, of redacted address is authorised to represent me in respect of penalty charge notices issued by any council, to pursue complaints and to sign documents on my behalf as my representative.

What could be clearer?

Barnet Council, who Mr Mustard writes to most often, accept that authority without hesitation as have the City, Camden, Enfield, Harrow, Hammersmith, Islington, Lambeth, Hounslow, Southwark and Haringey(!) in 2015.

On 6 July Haringey Council wrote back. 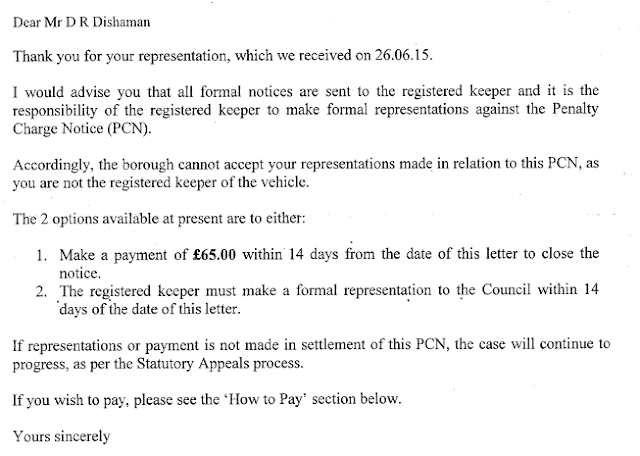 This was a postal PCN and so the first challenge made is the formal representation. The registered keeper has made them. Mr Mustard's letter started:

Mr Mustard has today received a clear signal that Haringey don't want to answer the representations that he makes on behalf of his pro bono (Mr Mustard does not charge any fees) clients. This from a letter dated 9 July, regarding Mrs O..

Haringey mean 29 June not 29 April and that isn't their only sloppy error. It is the owner of a vehicle who is liable for a penalty charge, that may or may not be the registered keeper (otherwise the Motability scheme would be suffering as all the cars are registered in the name of Motability).

There is no legislation that supports this line:

"We are unable to accept authorisation for a third party to act on their behalf".

The Regulations about challenging, making representations to and Appealing PCN have very little to say on the question of representatives. The one line which puts Haringey into a spot of bother is this one:

as clearly it is envisaged that a representative may appear on behalf of a vehicle owner (the appellant) and it would be a nonsense if they couldn't do anything about a PCN at earlier stages.

Of course it wouldn't be the case that Haringey Council are poor losers, would it?, given that Mr Mustard has contested 6 Haringey PCN in 2015 and the current score is

i.e. all 6 PCN have been cancelled, 4 of those by an adjudicator, so the council are down by c. £300 in PCN income and have paid out £160 in fees to PATAS (now called London Tribunals).

Throwing one's toys out of the pram is not the way to go. It might also be a breach of Human Rights law to deny a motorist representation by the representative of their choice. Barnet Council parking management don't behave childishly, they & Mr Mustard talk openly to each other (and sometimes politely agree to disagree), the council take all losses on the chin and try to improve their operations. Mr Mustard tries to stay one step ahead of them.

Come on Haringey Council, time to man up.