In 2014 Mr Mustard was a regular visitor to Newham to see his then +1. He used to enjoy parking in this parking bay as there was no notification of the times of it & as it was a mere 4 cars long and only had one sign, which was missing.


Given that Mr Mustard does not trust councils not to come along, erect new signs and then happily issue PCNs he photographs his car every time he needs to, in order to protect himself. The below photo of Mr Mustard's Mercedes was taken on 4/1/2015 so we know the sign has been missing for at least 6 months. 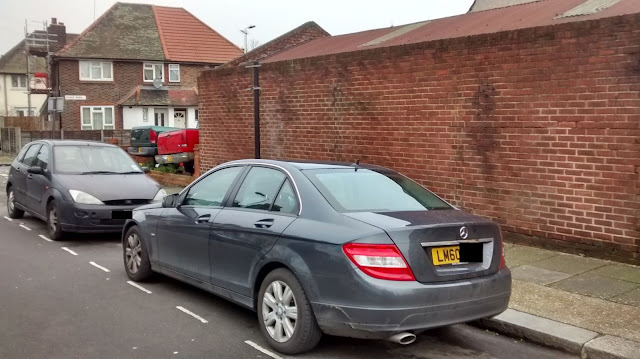 It is the theoretical duty of traffic wardens to check signs before they issue PCN and to report any signs (& lines) which are not correct, not compliant or are non-existent. Clearly in Newham the demands of the traffic warden's job are such that 100% of the time has to be spent on issuing PCN.

The Sky van was parked in the unsigned bay, as per the first photo. A traffic warden appeared. Mrs +1 came out of her house and politely pointed out to the traffic warden that the absence of any signage meant that no contravention could be committed - the bay was to all intents and purposes a free bay, 24/7/365.

Guess what the traffic warden did next? Yes, he issued PCNs. He told Mrs +1 that he could. She knows better and will give out Mr Mustard's contact details to the affected parties.


The behaviour of the traffic warden is downright dishonest. Mr Mustard hazards a guess that the bay sign which he photographs will be from the opposite side of the road and that has different rules and the sign on the other side is never applicable in any event (although it may be identical). Mr Mustard recalls that the bay on the opposite side of the road is for resident permits holders only and the bay in question was also for residents but also offered 2 hours of free parking. The occupiers of the bay today were dished out with PCN pretty much instantly.

If traffic wardens aren't on bonus why are they so keen to issue the maximum number of PCN every single day? is a question that Mr Mustard has yet to hear a satisfactory answer to.

So this will be 3 or 4 more easy wins for Mr Mustard once the motorists get in touch.