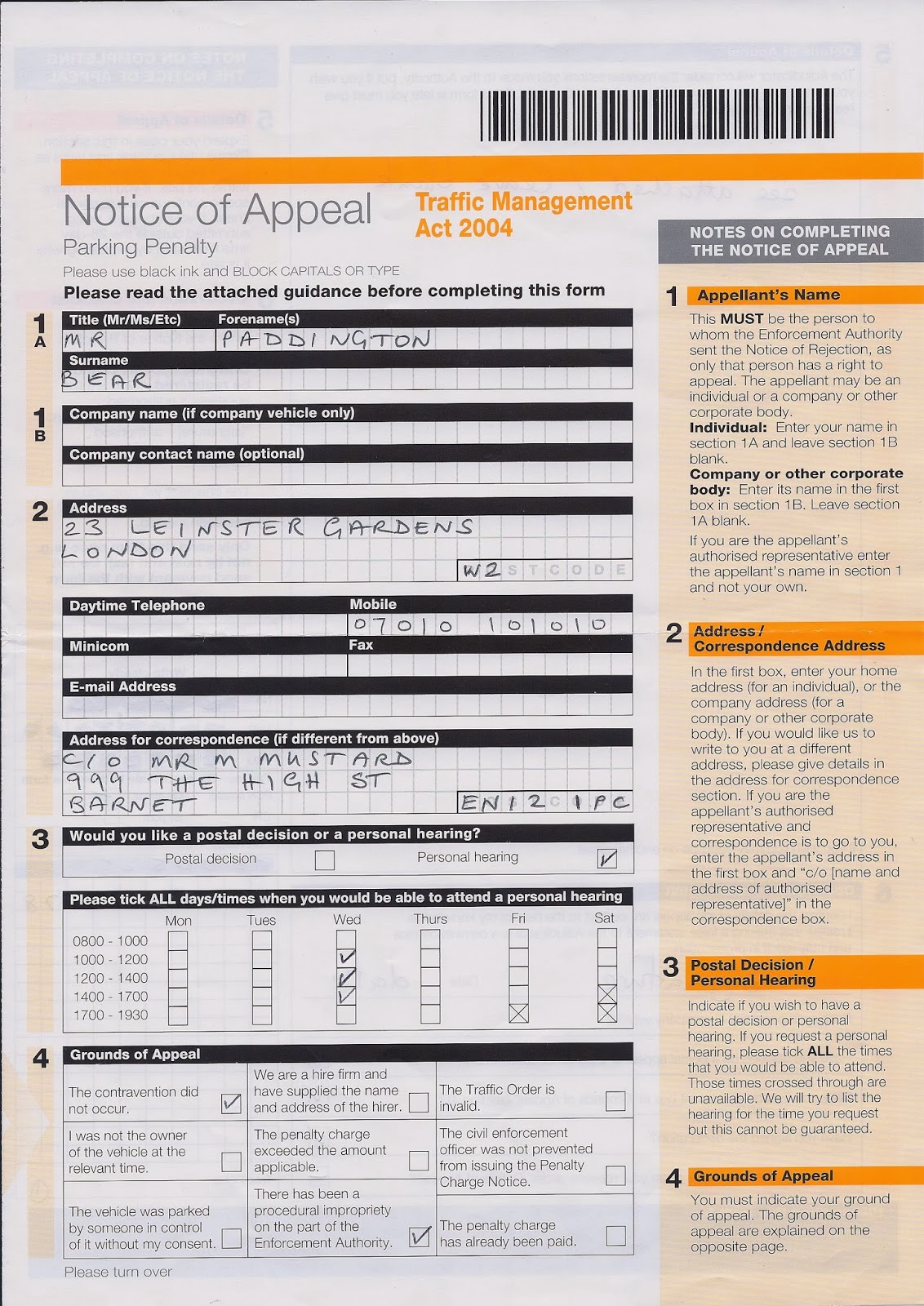 OK folks, time for a quick lesson in completing a PATAS form.

Boxes 1.&2. You all know your name and address. This is always the person (or company) named in the vehicle registration document.

If you put a contact telephone number on the form and your personal Appeal hearing doesn't go ahead on the day, perhaps because the council/NSL give in at the last minute, someone from PATAS will phone you to save you a journey. Although the decisions of adjudicators can appear to be, and sometimes are, inconsistent when it comes to administration Mr Mustard has found PATAS to be very efficient.

If you have Mr Mustard representing you then you will know his real address to put here. If the council send the Evidence Pack to you instead of to Mr Mustard (or whoever else represents you) that is a procedural impropriety. You can quote PATAS case 2130093365 in support (not a precedent but should be persuasive).

3. Mr Mustard prefers personal hearings as that way he can take the adjudicator straight to his main argument and possibly have the case over in 2 minutes. If you don't want to go to PATAS at the Angel, Islington (it is within 50m of the tube station) then tick the Postal decision box and then you don't need to tick any times and days below. There are evening hearings on a Thursday, although not very late, and hearings on a Saturday. Mr Mustard just happens to always go on his notional day off from his day job, which is a Wednesday and is a half day at PATAS so quite quiet (35 appeals the last time he was there).

4. Choose your Grounds of Appeal to tick but don't waste time worrying about the grounds as these are only for statistical purposes as far as Mr Mustard can tell. It is usually a waste of time to tick the "Traffic Order is Invalid" box as they have to be challenged in Court within 6 weeks of being made.

If your PCN came though the post because you drove away before the traffic warden finished it you did not prevent the PCN from being issued, some physical restraint is required for that so you can tick that box on the right "The Civil Enforcement Officer was not prevented..."

Most of the time ticking the first box will do "The contravention did not occur".

Box 5. As the adjudicator will be sent copies of all of your correspondence (and it is a procedural impropriety if the council do not put it all in the evidence pack later on) you can simply rely on what you have already written and leave this box blank.

If the Notice of Rejection of Representations makes you notice other grounds, usually that your most recent letter has not been properly considered and/or answered, then you could write that in the box. Mr Mustard usually has so much to say at this point that he types it up so it is easier for the adjudicator to read.

You will get a few days to study the Evidence Pack before the hearing and email PATAS with any extra arguments you wish to make at that juncture.

You must sign the form otherwise you will be sent a letter to sign to confirm your Appeal is to be registered. Mr Mustard ticks the boxes below and only once has he sent a form in late. It is best to do this on time as you'll need a really good reason like a month in hospital to be allowed to be late.

The hearing will not take place for at least a month after you file the form and the council get the chance to give in without a hearing which they do quite often (Mr Mustard filed 3 forms recently and the council/NSL immediately gave in on 2 of them which was wise.) The chances of them giving in on your case are about 1 in 4 or 5. The harder and longer you make your appeal points the more likely the council are to give in.

Similarly, the more Appeals that are filed at PATAS the more that NSL will struggle with the volume and give in so fill that form in now (please).