So here is a tweet that the council have just put out:


Saracens play The Sharks this Saturday. Have a look at our Event Day CPZ page for info http://t.co/HmHz5oWgyo
— Barnet Council (@BarnetCouncil) January 23, 2014

So Mr Mustard did look at the CPZ page, and here it is: 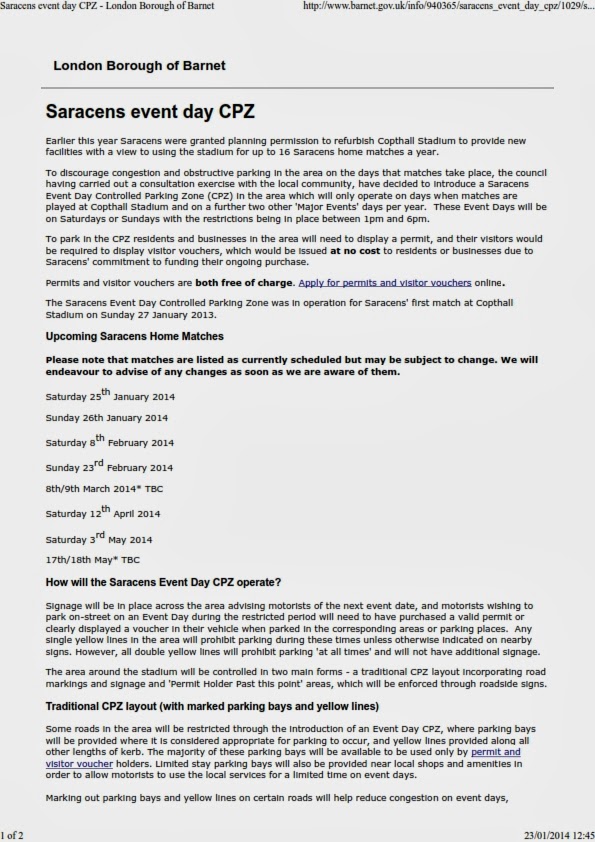 Has this 25 January fixture been added to the Event Day schedule on the website recently? Probably, if the council are only just tweeting about it. Mr Mustard has found that it was announced back on 9 December, here. Mr Mustard then went to the google cache and found the previous page which was crawled by the googlebot on 16 January. Here it is and it proves that the page change is a recent one: 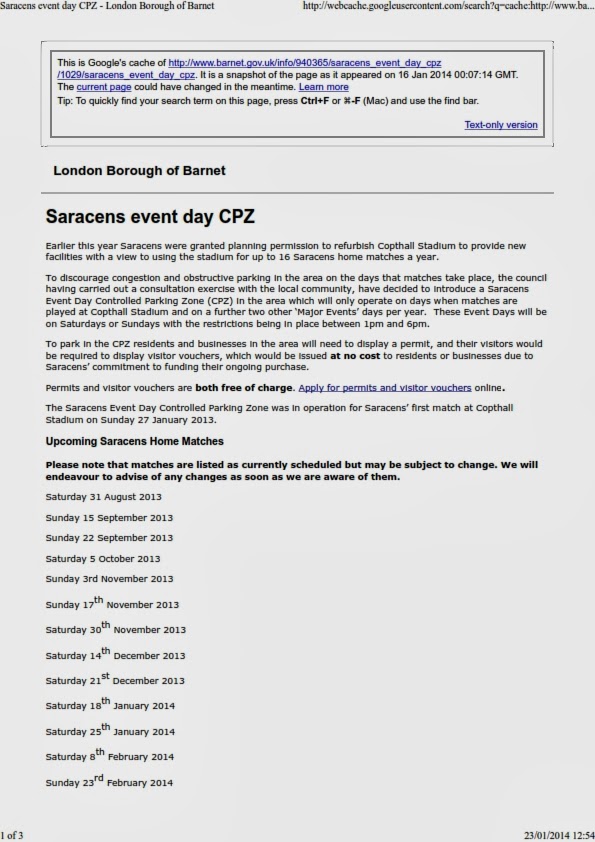 Then Mr Mustard looked out the fixture list that was distributed by Saracens themselves early on in the season, the front sheet of which was headed

and here it is: 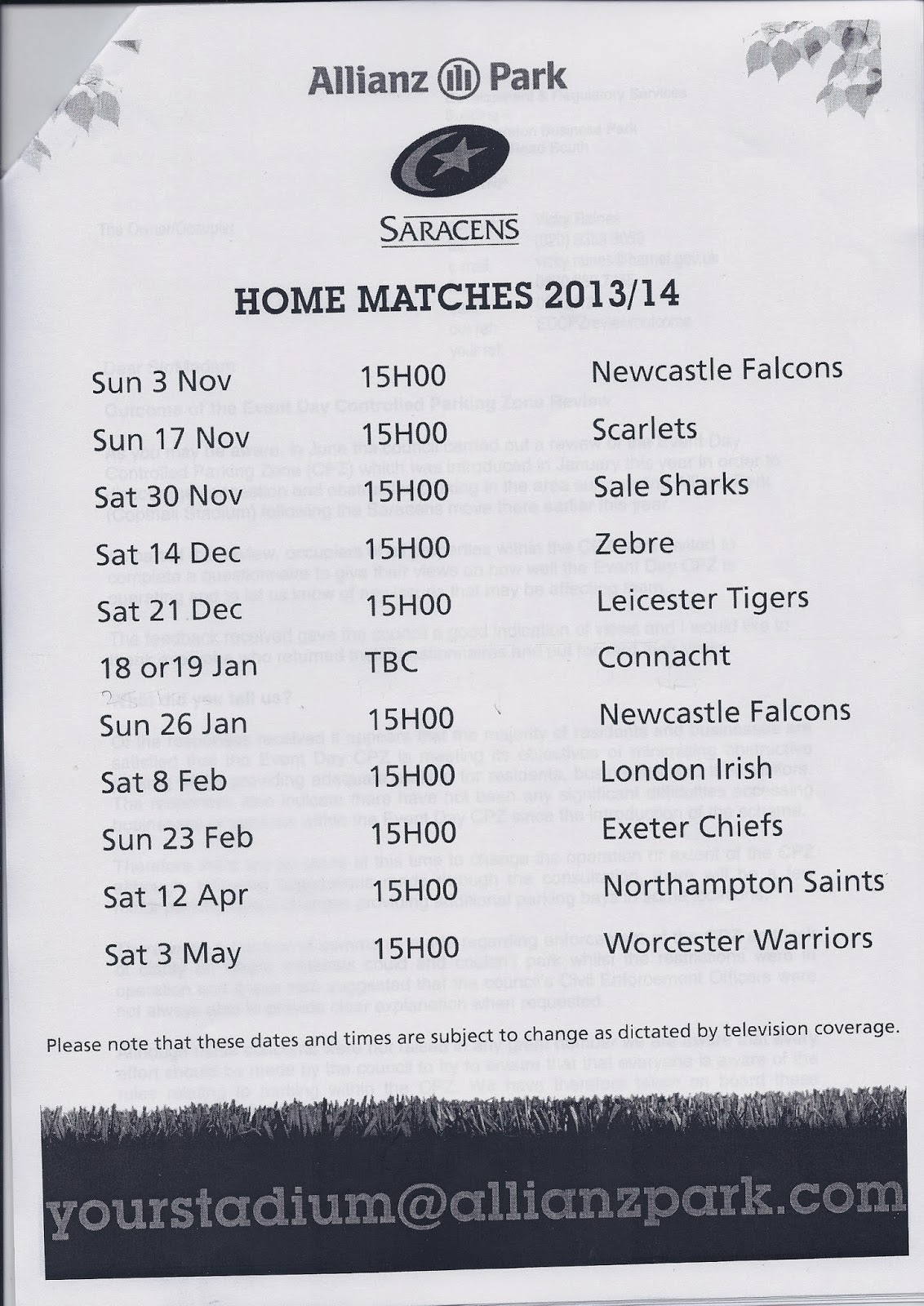 So look at those three lots of information in reverse order to get them in ascending date order.

To start with Saracens say there will be a match this Sunday.
Then Barnet Council somehow put down a match for this Saturday but not Sunday.
Then finally, with only 2 days to go, Barnet Council manage to get both matches onto their website, which no motorist is obliged to look at before they enter the zone. Parking compliantly based upon officially published information on which it ought to be possible to place some reliance, you simply can't.

What should the council do this weekend? They should decide to not issue a single ticket in the Event Day zone as profiting from its own incompetence is most unattractive.

What is the extra Saturday match anyway? It is a friendly against The Sharks (a team from South Africa and not from anywhere near Sale as Mr Mustard wrote previously). Will the crowd be that large that it should count as an Event day? Possibly not. (Mr Mustard got half of this entire blog wrong, the crowd is at least 9,000)

Everyone who gets a PCN in the Saracens ED event day CPZ zone should appeal three times. See the guide to appealing at the top left. The reason for the appeal is that the council have not made you properly aware that it is an Event Day. Simply repeat that appeal all the way to PATAS & you will probably win. Every PATAS appeal costs the council £40, they hate paying those fees. Make their pocket hurt.

Come on Barnet Council. Behave with honour and dignity.

Just to show you how little Mr Mustard knows about rugby he has been told that 9,000 tickets have been sold for the friendly fixture. There are only 300 parking spaces at the ground which isn't exactly well served by public transport. Enforcement therefore has to take place as residents complain about bad parking and about getting parking tickets when they shouldn't be there (different residents obviously). The numbers of PCN being issued are apparently slowing, going down from about 500 a day at the peak to under 200 now. Of course if you are one of the chosen 200 it isn't funny. More PCN are being cancelled if appealed (so appeal!) and you probably have a better chance if you live within the zone and then apply for a free permit. The whole size of the zone is again under question as the traffic wardens are wearing their shoe leather out covering it. Some dot matrix signs of a more reasonable price have been identified and they will get used the rest of the year for other purposes, road closures, special events in town centres that sort of thing.

It seem to take forever sometimes but changes are coming apparently. As part of Mr Mustard's deal with the COO to get a reasonable number of FOI questions answered (although he hasn't asked any for months) he agreed to write a bit of good news as well as bad, so when these changes arrive you will read it on this blog.