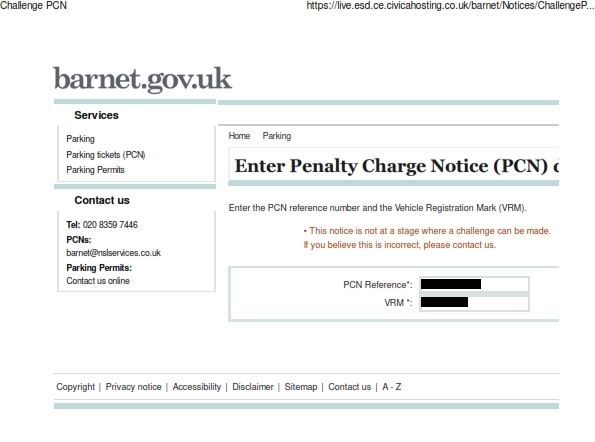 If you get the above message you might be out of time in which to make representations to Barnet Council about your parking ticket (PCN) but, on the other hand, you might not.

You get three bites at the cherry (a PCN is more like a rotten apple though) when it comes to appealing.

The first time, known as informal representations, are usually made in the 28 days after you have been hit served with a PCN. These representations are outside of the statutory process but do allow for obvious errors to be picked up and PCN cancelled at an early stage with least fuss for the motorist. The fewest tickets are cancelled at this stage, about 10%. You can send in an informal appeal at any time up until the Notice to Owner is issued which is a maximum of 6 months after the PCN is served.

The second time, formal representations are made in the 28 days after the Notice to Owner is served. This is set down in statute. Miss this deadline at your peril. These appeals succeed twice as often as informal ones, about 20% of the time, even when the words used are identical.

The third time, for Barnet Council cases, is to PATAS, the home of the independent adjudicator. These appeals succeeded 72% of the time last year (90% for Mr Mustard's cases) and so you can see that the longer you fight for the more chance you have of winning. Keep those appeals flowing; if your argument is a good one, simply use it three times.

Now what Mr Mustard has discovered, after testing on a number of cases, is that if you appeal informally as soon as you get the PCN and have that appeal rejected, the computer system is set so that you cannot make another informal appeal on-line even though you might still be within the 28 days. This means that if you have thought of another point of appeal you cannot use the on-line system to submit it. This is to fetter your ability to appeal on-line and is in contrast to what the PCN says on its face:

"If representations against the penalty charge are received at the address detailed overleaf before the Notice to Owner has been served, those representations will be considered;..." except that you can't easily make them on-line which is offered as an alternative method of communication.

instead you will have to write to:

If Mr Mustard was being cynical he would think that the council were trying to put you off from appealing as they dislike receiving too many appeals, it slows them down from their primary task of extracting as much money as possible from the motorist.

Doubtless this fettering will turn out to be a terrible accident in the computer software section and will be changed very soon to allow for on-line appeals at any moment up until 28 days after the Notice to Owner was served.

Paragraph 86 of the Secretary of State's guidance on civil enforcement of parking contraventions is well worth a read:

"Enforcement authorities have a duty not to fetter their discretion, so should ensure that PCNs, NtOs, leaflets and any other advice they give do not mislead the public about what they may consider in the way of representations"

Appeal experts in other boroughs will probably want to test this informal appeal blocking to see if it is a common feature elsewhere. Feel free to add a comment below.

The reason it is worth sending in one or more informal appeals is that the council have to respond to them or they have committed a procedural impropriety as the PCN says that they will be considered. Not doing what a council says it will do on the face of the PCN is clearly unjust. Some adjudicators might say that there is no requirement within the legislation to respond to informal representations but that is to ignore good manners and the council's own service standards when it comes to correspondence and to act contrary to the offer on the face of the PCN. Point that failing out, the PCN promise, to an adjudicator and then they will almost certainly agree with you that it is a procedural impropriety and as soon as that is established the legislation requires the adjudicator to cancel your PCN. Result.

Get your pen or keyboard out and get writing or typing.