Not so fast Haringey Council

Mr Mustard hadn't had time to research other London Boroughs' CPZ charges in any great detail although it was in his mind and then he was prompted to do so by an envelope that plopped onto the mat at Mustard Mansions which contained a briefing note prepared by an (presumably legal, use of word impugned is the clue) officer (member of staff) for councillors at Haringey which tells them, in non-legal parlance, that everything is cushty in Haringey.

The document is above but the main points are that you can't use CPZ charges to raise revenue (this gets stretched by the officer to PCN income which was a revenue stream that was not tested in court. PCNs are issued under entirely different laws and the overuse of PCNs is a question for another day)

The officer then says that reports to Cabinet from 2010 to 2011 (both entire years? that isn't clear) have been scrutinised and show "supporting evidence" of an intention to stay within the law. That isn't the same as saying that the decisions were 100% within the law.

There is an irrelevant remark that the parking surplus only accounts for 25% of what it could be spent on. This is to follow the same failed argument as Mr Mustard heard in Court that residents in CPZs could be charged the entire spend for transport of the whole borough. Perhaps a lawyer for London Councils should have been in Court?

The council adopted an emissions based charging policy in 2007 and in 2011/12 (probably 1 April 2011 - Mr M has not checked) increased prices by between 25% and 66% (can you hear the klaxon sounding in Mr Mustard's head - it should be the same in the head of every Haringey councillor reading this report) which brought prices into line with other London boroughs (now given that London boroughs are so varied their prices should not be in line, those in Havering should be vastly different to those of Kensington & Chelsea). This was what Barnet inaccurately said about their own charges and they were found to be unlawful so that is rather a silly argument to use.

Mr Mustard will now impugn the charging decisions of Haringey Council using their own document.

A meeting of Cabinet on 16 November 2010 was asked to approve increases in parking charges. The introduction said:

Given the unique range of challenges faced by Local Government it is important to continually review service provision to ensure that service costs and charges are appropriate and will remain so.

The 2010 Parking Services charges' review (the first since important changes were introduced in 2007 and 2008) has been undertaken to assess whether Haringey's range of charges are appropriate and whether they are in line with neighbouring and other London boroughs.

The proposed changes included in this report aim to ensure that Haringey's charges remain in line with the London average.

So "the unique range of challenges" looks like an oblique way of saying Haringey are strapped for cash and need to put up prices. That has been the most challenging factor in the recent past for a local authority.

There is no valid traffic management reason to match the charges of Haringey to any other borough. Here are the charges for other boroughs. Barnet went up from 24th place to 6th and have now dropped back there. 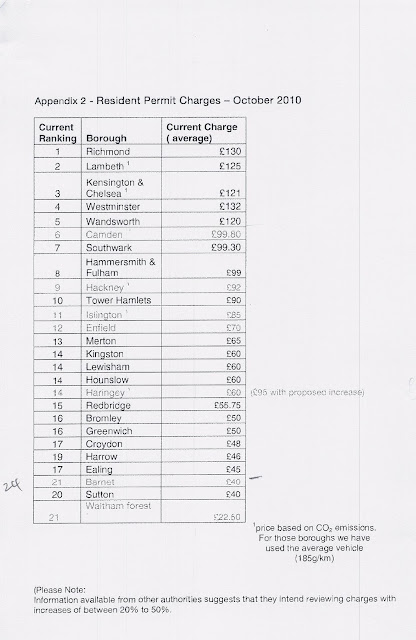 In 2007 the council also introduced incrementally higher charges for second and subsequent permits. This policy, followed by other councils, also doesn't have a traffic management purpose. In Barnet the judicial review judgment says that 25% of the permits were for second and third vehicles (the maximum allowed in one household) and so the policy of increased charges for second and third vehicles at one address does not look like it has reduced the numbers of vehicles, it has simply led to increased income. Let us suppose that a household contains 3 adults (a couple and their adult offspring) who are all environmental health officers and they are all designated as essential car users for work purposes. They all need a car and so as they all share one address they have to pay extra which discriminates against them. This is because they have a valid business need for the 3 vehicles. If the policy was to charge extra for the second or third vehicle of one person, then the objective might be said to be achieved of managing demand for road space. There are also some roads where there is ample parking space, large detached houses with a park on the opposite side of the road for example and others, streets with small Victorian terraces on both sides with huge demand for space and the current charging policy makes no allowance for the actual demand which is supposedly being managed.

At para 4.6 this cabinet report said "the review has concluded that charges should be increased to a level which stays in line with increases (on average) which have been and will be introduced by neighbouring Boroughs and other Boroughs across London" which looks to Mr Mustard like charges set for reasons other than traffic management.

At para 6.1 regarding Resident Permit Holders. Since 2002 they received a financial subsidy from PCN income and the 2010 review has concluded this is a balance which cannot be maintained because PCN issues are declining and the consequent financial pressure that this decline creates in Haringey's parking accounts needs to be addressed. Oh dear, where to start. CPZs mean more PCNs get issued so the PCN income should be looked at together with permit income for each zone. How costs are allocated is not stated and Mr Mustard finds it hard to believe that a council cannot check a permit application and issue it for less than the current amount charged, being £21 / £53 / £106 or £159 according to vehicle emissions or engine size. Why isn't there a £21 permit for people with old tiny engined cars? (tariff here). PCN issue for parking goes up and down due to various factors. For the years ending 31 March they were as follows, to the nearest thousand:

so they were down by 3% on previous years in November 10 when this report was issued but they soon shot back up again and so the justification for a permit price increase has gone.

Then the Chief Financial Officer comments at para 7.1

"The exact level of additional income generated will depend on usage levels but it is expected that the revised charges will address the base issues within the parking account and contribute towards the savings the Council will be required to deliver in future years". The bold emphasis by Mr Mustard could be regarded as the smoking gun in this report although it looks more like an arsenal of them (sorry, can't get a THFC reference in). Why the finance chief is commenting on a report about traffic management is an interesting question to which there is only one answer. It is all about the money. The base issue of the parking account for 2010-11 is that it had a surplus of £3,324,000 - isn't that sufficient?


So what should Haringey councillors be doing? Scrapping all existing charges and starting again. They should revisit the whole charging regime and make it cost neutral. They shouldn't discriminate on grounds of address or engine size or the amount of money they would like to make from the special parking account. A charge based upon length of car would probably be reasonable from a rationing viewpoint as kerb space is limited.

Haringey Council is not as Snow White as the officer's advice would have you believe. Ask probing questions councillors, earn your allowances.