Another recent tribunal case, Mr Mustard suspects, in which most people will regard the issuance of a PCN as unkind and mere revenue raising. Full marks to the motorist for taking up their right of Appeal to an independent adjudicator but unfortunately their hands were tied by the law. 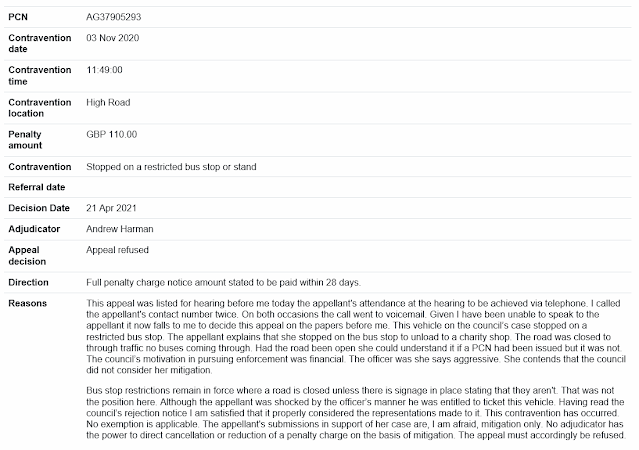 Do not blame the adjudicator, they have to apply the law even though they may have been unhappy to do so. The council could have chosen to cancel but made a deliberate decision not to. Discretion is entirely in their hands.
Mr Mustard wonders if there was a bus stop closed sign that the motorist should have taken a photograph of in support of their case at the time. Not a bad idea to take photos when you get a PCN of things which might be relevant. Digital photos don't cost anything so be snap happy.
Mr Mustard couldn't remember why the road was closed so did a search and then the event came back to mind, the terrible burst water main, as reported here in the local paper
Burst water main in North Finchley
The motorist did no harm and was in fact trying to do good, the council make that less likely in the future.
If you don't like the manner of a traffic warden ('civil' enforcement officer, or perhaps uncivil in this case) then what you should do, separately from the challenge to the PCN, is to write a complaint. Don't lower yourself to their level and use intemperate language on the street because it is only once sufficient people write in with complaints about conduct that traffic wardens will be told to behave properly with courtesy and respect to the public (Mr Mustard may have his rose tinted future looking spectacles on here but there is nothing wrong with hoping for the better). Most of the traffic wardens in Barnet are OK but there are a few whom Mr Mustard thinks need some training in their public manner.
Yours frugally
Mr Mustard