Mr Mustard drafted a complaint for Tristan to send, it got over-looked at the time but finally got sent on Sunday afternoon. Mr Mustard doesn't mess about, complaints about laws not followed should be sent to the Monitoring Officer: 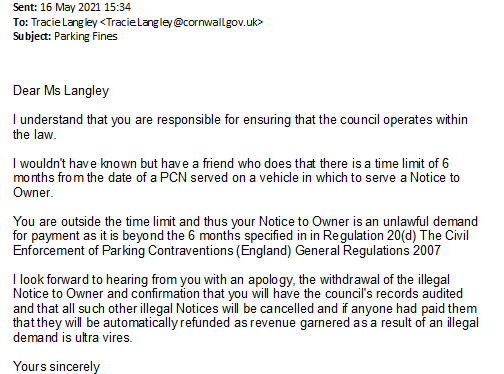 The Notice to Owner had already been cancelled but Mr Mustard didn't see why the late one that he saw would be an isolated incident.

Ms Langley was quick to respond to her email, wrote back very quickly (Monday morning at 9.09) in a friendly and open way and although Mr Mustard hasn't given you the numbers her email footer includes both a landline number and a mobile. That is rarely the case in Barnet Council where staff don't want the public to be able to phone them up or often to even email them. Public accountability should include multiple easy contact methods. Well done Cornwall Council. 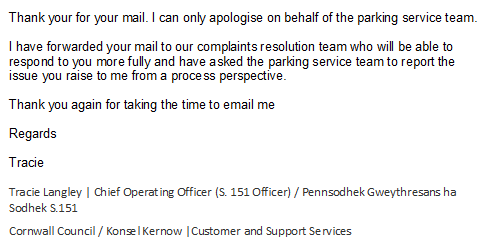 There wasn't long to wait for parking to research and send their reply early in the afternoon of the same day. Realisation had probably dawned pretty quickly that they had blundered and were in the sights of someone who knew parking legislation pretty well. 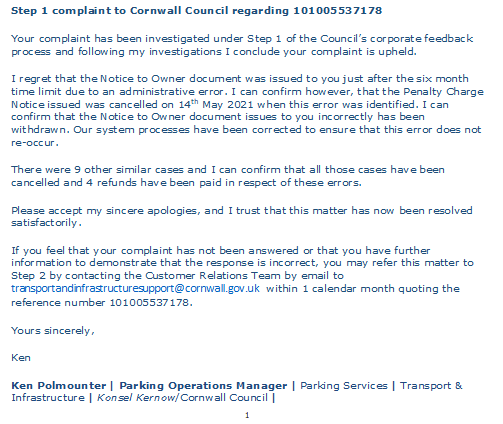 Good to see a parking manager expressing regret rather than trying to excuse the department. The error was identified by Tristan though not by the council as you could read that sentence. It is slightly worrying that their system was not set up to prevent the council from breaking the law, there is too much automation in the world of PCNs and in the rush to extract money from the motorist for wrongful behaviour the council forget there are also rules which apply to them. Most time limits for councils are much more generous than the 28 days which is all the motorist ever gets.

The council get a pat on the back for admitting there were 9 other similar cases of which 4 had been paid and those motorists are going to get a pleasant surprise, a refund for monies they paid which were not legally due. Cornwall Council's reputation will be enhanced by their behaviour.

The apology feels sincere and there will be no need to go to stage 2.

There is however one odd fact about this, Mr Mustard himself sent a Freedom of Information request to Cornwall Council in April, which they answered quite quickly (so another bonus point) as follows: 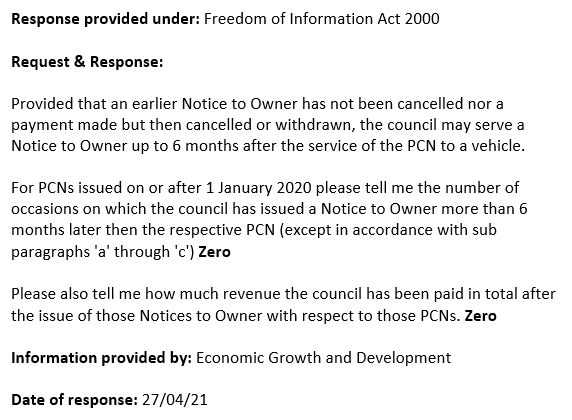 The bonus point is somewhat wiped out by the minus 10 for a wrong answer.

The question should have rung an alarm bell. Ask yourself, FOI officers, why someone is asking a question that is so precise, it was in this case because Mr Mustard knew the answer was at least one occasion and probably more.

Mr Mustard hopes that the council are now checking all deadlines which apply to PCN processing and adapting their software to make sure they are all respected.