Barnet Council - sparing with the actuality 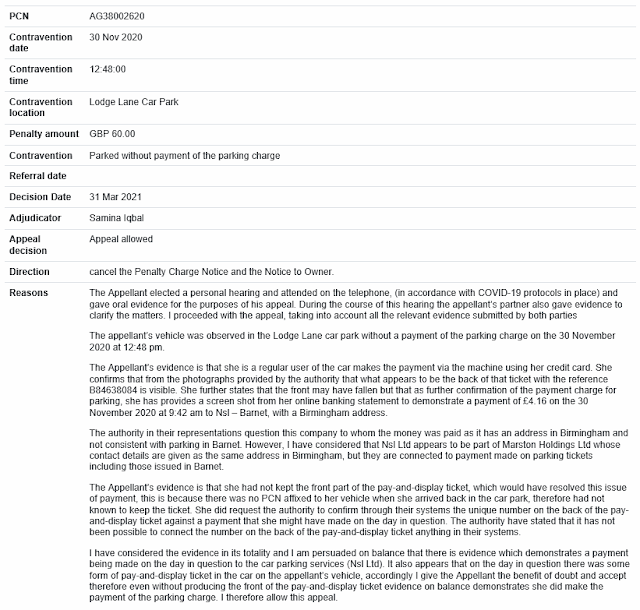 Mr Mustard deleted this blog post, now restored, thank you to the reader who knows who they are.

The above tribunal decision is a revelation - it shows the Barnet Council parking back office in a terrible light.

It also shows a lack of record keeping in that they allegedly don't know what receipt serial numbers are loaded in the parking meter (they may even be generated by the meter itself which must have an audit trail).

What we are expected to believe, if we follow the distorted logic of the council, is that a motorist parked without paying for their parking at 9:42 guessing that they were going to get a PCN later in the day & they managed to buy an item elsewhere that cost £4.16

which by coincidence is the sum payable to park all day in the car park, as tariff here (and above) and that by a second unbelievable (Mr Mustard chooses the word carefully) coincidence their purchase was from NSL Barnet (but with a Birmingham address) and NSL just so happen to be the provider of traffic wardens, permits and back office services to Barnet Council. Now the Appellant (the motorist in question) is either the cleverest motorist in Barnet in that she manages to buy something of the same value as her parking from the same supplier (who doesn't deal in anything but parking!) or she is telling the truth and Barnet Council are unwilling to face facts which don't suit their argument. Mr Mustard would have put his money on the latter position.

If anyone who regularly parks in Lodge Lane Car Park and pays with a debit or credit card at the meter would care to send an email to mrmustard@zoho.com with a copy of the relevant part of their credit card or bank statement, that would be appreciated in allowing him to add some proof to this blog post.