Above is the view from Towan Headland, near Newquay, where Cornwall Council have a car park.
On the car park sign 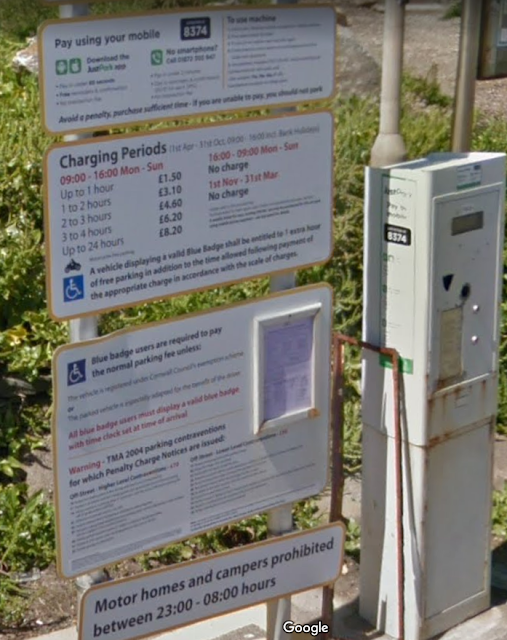 at the bottom, which you will not come to for a few minutes once you have carefully read everything else, it says that motor homes (motorhome) and campers (a large motor vehicle with accommodation for camping out - says the concise Oxford dictionary)  are prohibited overnight from 23:00 to 08:00
Fair enough. So you can sleep there in your car but what about a normal van, like this one? 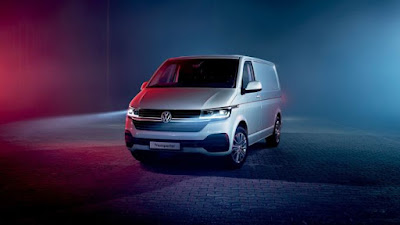 In the absence of side windows Mr Mustard's view is that, even with a bed thrown in the back, it isn't a motorhome or a camper. The traffic warden duly came round before 7am and slapped a PCN on the windscreen (very quietly). The PCN was contested (the informal challenge) as it was rather vague.

The informal challenge was short and sweet: 'Thank you for the PCN. I have no idea what I am accused of as your PCN does not say which class of vehicle the car park is designated for. Accordingly, the contravention is denied'.
The response, rejecting the challenge. set out why the PCN was issued but doesn't cure the deficiency in the PCN.

The definition is to be found within the Traffic Order.

Mr Mustard thought that even with a double bed in the back it wouldn't qualify as that would be the entire load area taken up, as the vehicle was not constructed for that purpose and as it had not been permanently altered. There is clearly a difference between a panel van and a motorhome or camper (called Motor Caravan by DVLA) as this extract from a DVLA letter sets out.

Mr Mustard advised the owner, let us call him Tristan (a popular name in Cornwall) to fight on as he was sure he would prevail in the end.
Time passed and the Notice to Owner didn't arrive. There is a 6 month time limit to serve it (where the driver and the keeper are one and the same person and where the witness statement procedure has not been used) and 10 days after the 6 month time limit a council employee woke up and sent the Notice to Owner out. Mr Mustard wrote the formal representations but Tristan sent them:
'The Notice to Owner has been served after the time specified in Regulation 20(d) The Civil Enforcement of Parking Contraventions (England) General Regulations 2007'
Mr Mustard was amazed when the formal representations were rejected as they were bang on the money.

The first paragraph shows that whoever considered the concise and precise representation thought about something else, whether or not a contravention had occurred.
The second paragraph was just plain wrong in respect of the time limit:

and also in the use of the word 'Appeal' which means an Appeal to an independent adjudicator not what had been made, the formal representations to Cornwall Council, as they correctly described them in the paragraph heading, such sloppy use of terminology.
The council weren't unable to cancel, they were unwilling to, a big difference. Pretending the decision is out of their hands isn't a good look and is legally wrong.
The Notice of Rejection didn't need to offer the discount again and the council must have thought they were on firm ground as they didn't choose to offer it as an inducement to Tristan to save £35 rather than run the risk of losing in front of the independent adjudicator (there was almost zero risk) and paying the full PCN value of £70.
Thus it was that on Thursday last at about 6pm an Appeal proper was started with the Traffic Penalty Tribunal, the home of independent adjudicators outside London, on the following simple grounds:

The very next morning, before 9am, Cornwall Council did a complete U-turn

What we have therefore is a local authority who broke the law by sending out a Notice to Owner when they were no longer entitled to, denied it and then only capitulated when they knew that an expert lawyer was going to consider the argument.
Ther question is why the representations were rejected? It may be that the council employee who considered them was ignorant of the law and didn't bother to read it or it was a cynical rejection hoping that Tristan would give up (fat chance with Mr Mustard in the shadows behind him). Neither explanation is a satisfactory one.
If you know you are correct, or even if you are only fairly sure you are, you can rest assured you will get a hearing from an independent adjudicator which is untainted by any bias caused by the monetary outcome and that when their feet get put to the fire many councils run away.
Yours frugally
Mr Mustard
Posted by Mr Mustard at 7:30 am