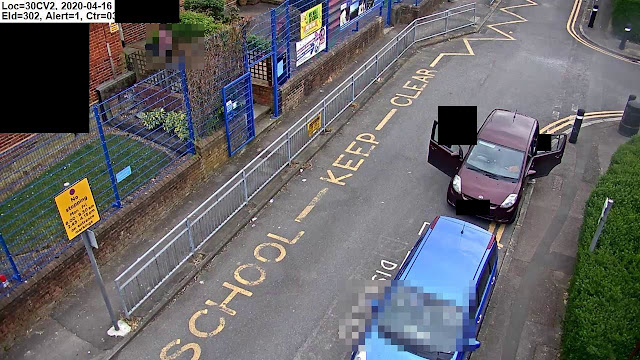 As it happens 'restricted area' is not defined in legislation. What the Traffic Signs Regulations and General Directions 2016 say about the markings on the ground is this:

Note that the prohibition in para 2 refers to stopping 'on' the markings. For a long time Mr Mustard would win at the tribunal if the vehicle stopped in the middle of the road, not over the marking themselves. Then, on 2 August 2018, an adjudicator with decades of experience decided what would become a key case at the tribunal and thus a decision which his colleagues were very likely to follow (and it wasn't a decision that Mr Mustard disagreed with)

Thus it is clear that Adjudicators regard the school keep clear markings as applying to the centre of the road, the same as for single and double yellows.

Why, Mr Mustard hears you ask, was the car on the other side of the road sent a PCN? Automation is probably the answer. The school markings are monitored during the applicable hours by a cctv camera. It selects short bursts of footage which the computer decides is a contravention. Those clips are then watched, in theory, by a human being who has to decide if a contravention has occurred or not. It is perfectly possible that the operative charged with this task popped out for a fag, a cup of tea or a jimmy riddle whilst the clip was running and simply ticked the yes box to this being a contravention when he/she got back to their desk.

Mr Mustard will fire an email off to the parking manager whilst simultaneously making representations through the usual channels. He doubts this PCN will live for long.

Simple logic, if stopping on the double yellow is part of the restricted area so is the disabled bay the council have painted there.

That is a proper apology.