Now Mr Mustard does recall Cllr John Hart mentioning at committee the problem of pizza (well food anyway) delivery bikes taking up all the space in the day in Mill Hill Broadway to the detriment of car drivers who might want to pay to park (revenue of course was not his first thought, it was the loss of a visitor, full stop, of course) & Mr Mustard can see how it might present a problem in certain locations.

The above appears to be an attempt to fix the problem, if there is one, by making motorcycle bays longer and reserving them for businesses who have paid to park there, the Mr Mustard motorbike not having a permit will have to park elsewhere, which would be in a car space for free, thus preventing yet more parking by cars. The problem with reserving any section of road space for one class of vehicle is that the rest suffer even more (a bit like bus lanes but let's not go there today).

Google's last drive by image is below 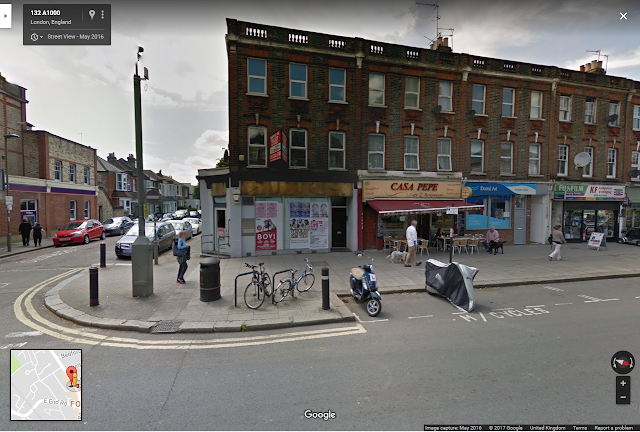 Maybe there is a fast food delivery shop on the corner now, residents will know and can comment. Mr Mustard prefers slow food, especially at Table du Marché, at no. 111. (their service is at the correct tempo, Mr Mustard is referring to slow food as being real food, he never has pizza delivered to Mustard Mansions).

Anyway if the problem is too many delivery scooters, the bay doesn't fix that problem, in fact it makes the problem official and rakes in the money at the same time. Trebles all round, as they say in Private Eye.

Unless councillors have voted on creating motorcycle permits at a committee meeting, and they may have as Mr Mustard has been a bit slack on his recent attendances, these permits can't yet be sold in any event? However it looks like the Traffic Management Order can be amended by the Chief Executive which is to give him policy making power when really he should only implement what councillors decide upon.