Do bailiffs bully the disabled?

Mr Mustard's client has got herself in a bit of a pickle. A proud person, she didn't want to bother him with her Ealing PCNs as she thought she could sort them out herself. Thanks though to being ill such that she has to be checked up on every 2 months and suffering from depression due to her illness, lack of money and general quality of life, she has not beaten the PCNs and they have ended up with bailiffs.

Last June she asked Mr Mustard for help with the bailiff at a time when he was so overrun that he couldn't deal with bailiff matters (he also prefers to stop tickets reaching that stage) & passed her the details of a bailiff advice helpline. He told her not to worry as the bailiff could not remove or clamp her car. Guess what happened next? Yes, in September 16 a bailiff acting for Ealing Council clamped the car. Mr Mustard was on his way to the parking tribunal when it happened. He only had time to text the bailiff to tell him he could not clamp the car as the blue badge is permanently on display. Mr Mustard found out later that within 30 minutes the clamp was removed. That bailiff at least realised the game was up having chanced his arm with the wrong person. Mr Mustard's client may be ill but she will not be bullied.

Just before Christmas with perfect timing a second PCN reached the bailiff stage. Now Mr Mustard, as a debt collector in real life, accepts that bailiffs have a job to do and they have draconian powers of removal of goods. There are though also some limited checks on their power. In a civilised society parliament has decided that disabled people will not have their mode of transport removed. In addition, your home is your castle and forced entry cannot take place without specific court consent (for a traffic PCN, it can be for a magistrates court debt) which Mr Mustard suspects would not be granted against a disabled person claiming PIP as they won't have any assets worth the cost of seizure & sale.

The first Notice was delivered on 23 December 16. It was for 2 PCNs. 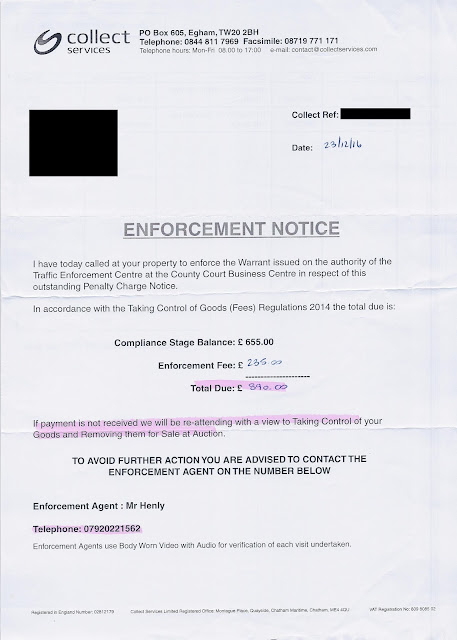 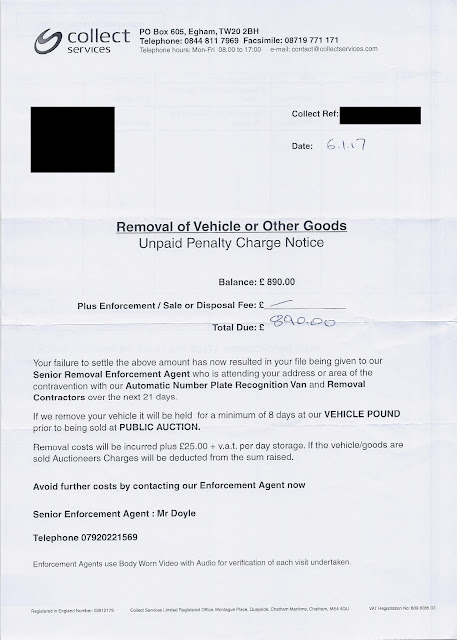 Just another 6 days and here is the third letter, just for one of the PCNs, not for both for some reason. 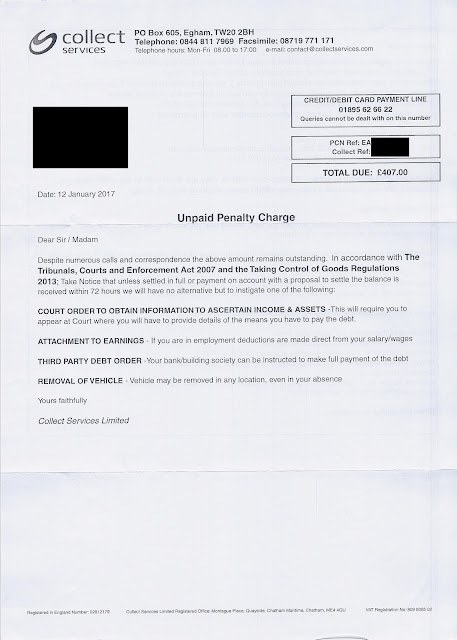 Another visit on 20 January, for both PCN this time. By now, the bailiff, or at least a bailiff, must have seen the car as it is parked off street outside the property in a disabled bay and with the blue badge clearly visible. It was also the case that the blue badge formed part of the representations which were made & the badge was issued by Ealing Council so they know they are sending a file to bailiffs for goods, nearly always the car, to be seized when the car is exempt by law from seizure. This is information which in Mr Mustard's view should be communicated to the bailiff by their client, Ealing Council (or any other one) at the start so that the disabled do not have their car clamped in error. The previous clamping by a bailiff in the employ of Collect Services may be a factor in them not having clamped or removed despite their many letters and in fact means that in their records they knew from the start of this correspondence that they could not remove the car. 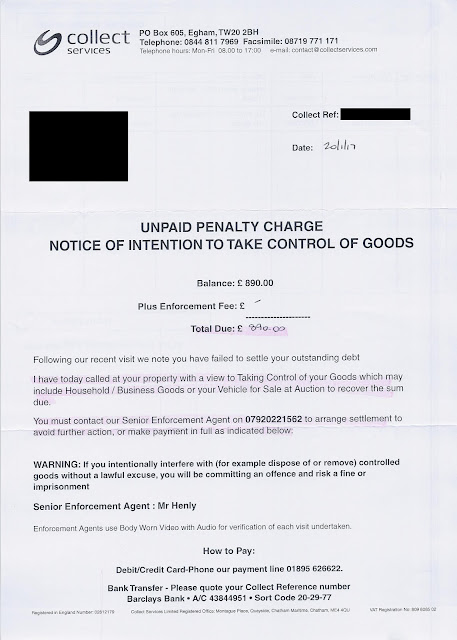 The question is why are they hand delivering letters which state that they will remove 'your Vehicle' when they know it is exempt?

Only 4 days to wait and a third PCN has reached the bailiff stage. 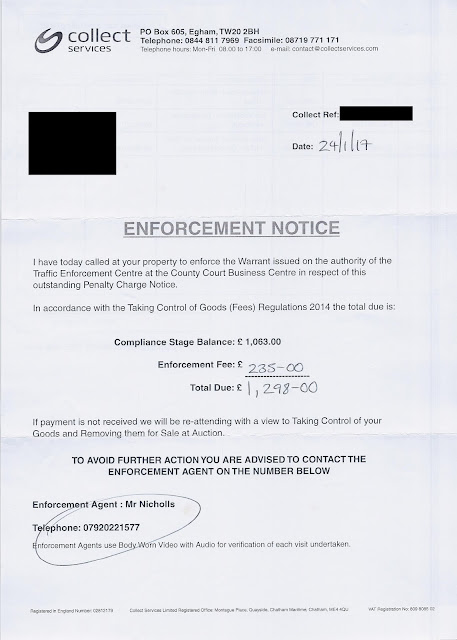 Ooh, a different letter was issued on 3 February. The bailiff didn't need ANPR as the vehicle is usually parked outside the address on the warrant. Another threat to remove which the law will not allow. The balance cannot have increased if a bailiff (enforcement agent) has called recently as the debt already included 3 separate visit fees, one for each PCN, of £235 a pop. 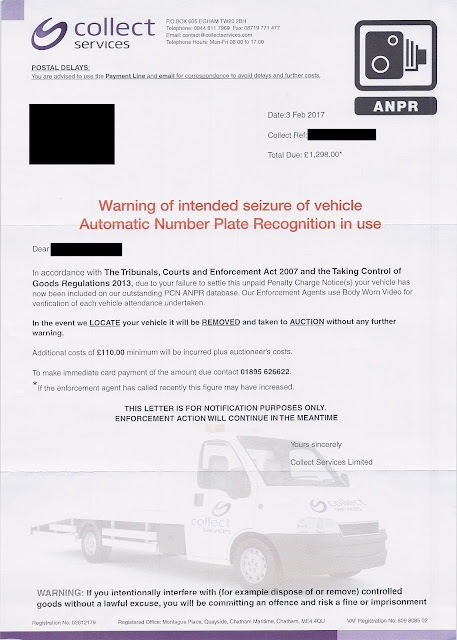 Nearly a month went by, one of the warrants had expired and was not renewed so the debt dropped. 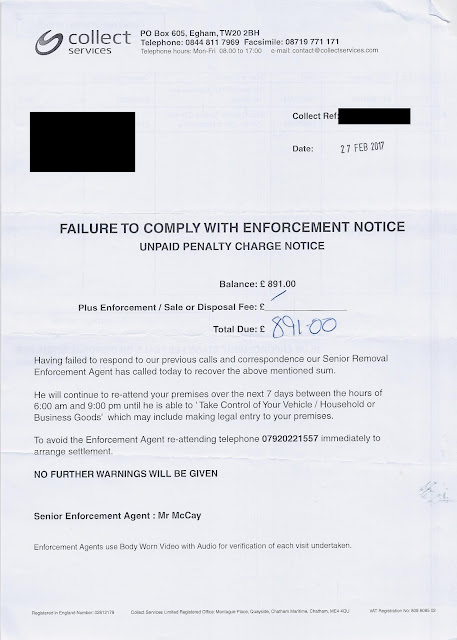 Another 10 days, another letter. 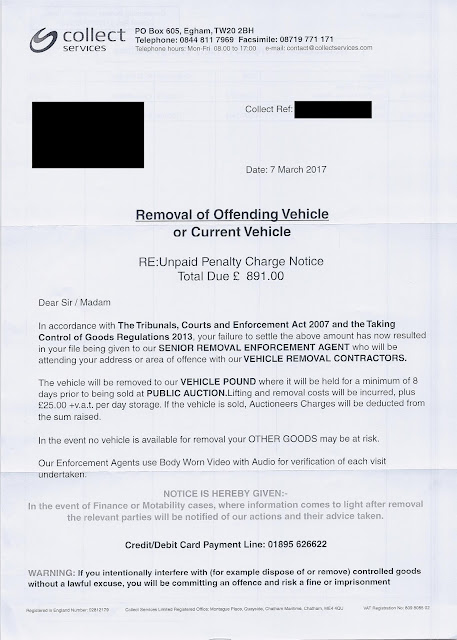 On 13 March the ANPR letter was again sent containing another threat of illegal action. 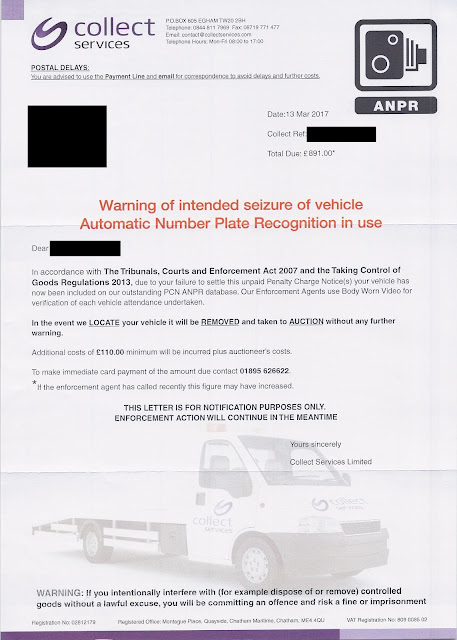 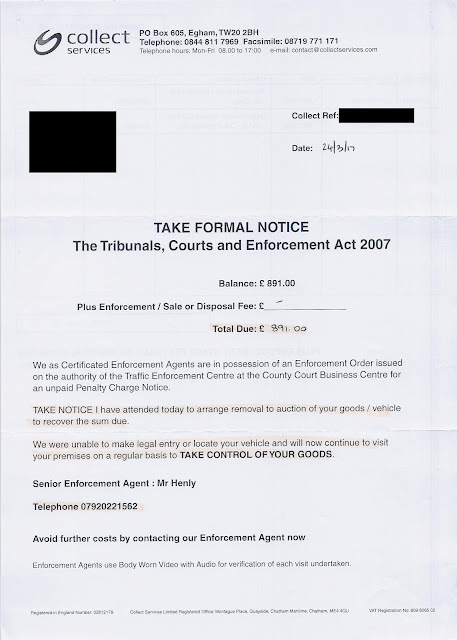 Another 10 days again, another letter threatening to break the law. 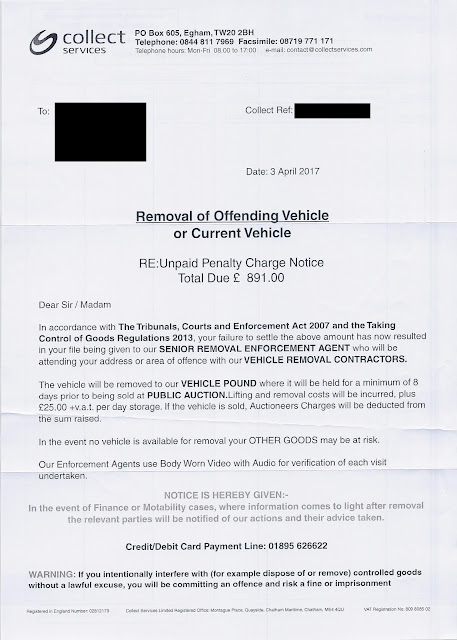 A month until the next letter, sorry if you are already bored, try imagining receiving all these letters especially if sick and living on benefits. 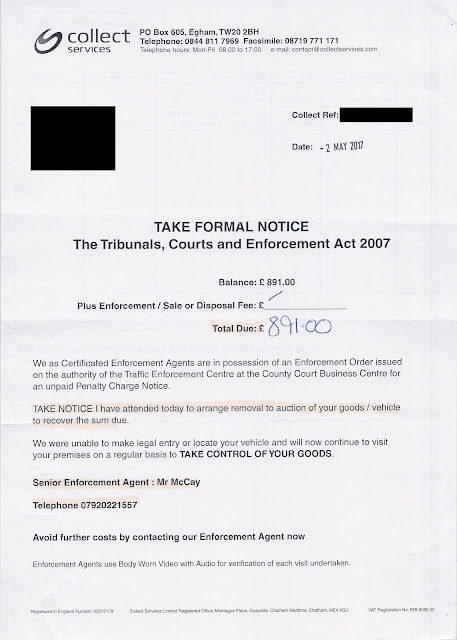 On 8 May Collect had got themselves a new template and sent a different letter about an appointment that never was and again illegally threatening to remove the car. 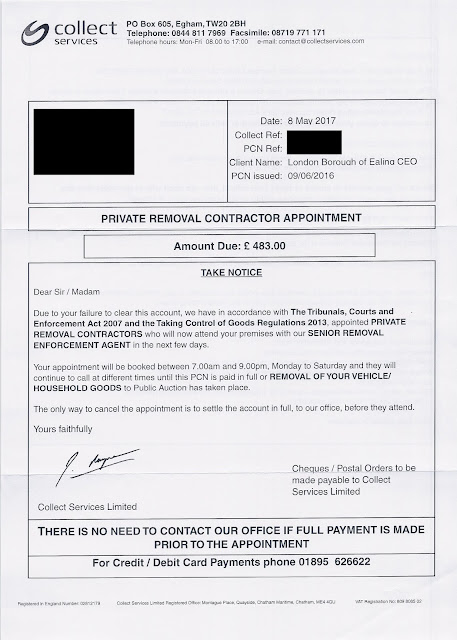 Just 3 days later back to one of the other letters 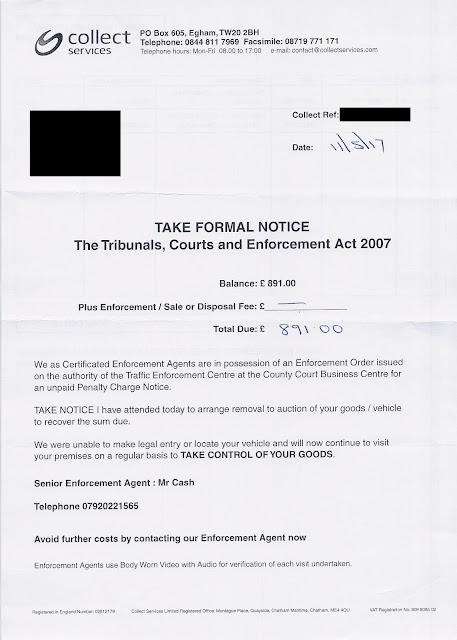 Mr Mustard can't quite read the date on the next letter but thinks it may be 10 June. It might be the final roll of the dice by Collect or else they saw that the Newlyn bailiff had only gone and clamped the same car on behalf of Brent Council, a matter about which a solicitor is still waiting a response from Brent Council, the clamp having only been removed after it was in place for 6 days. 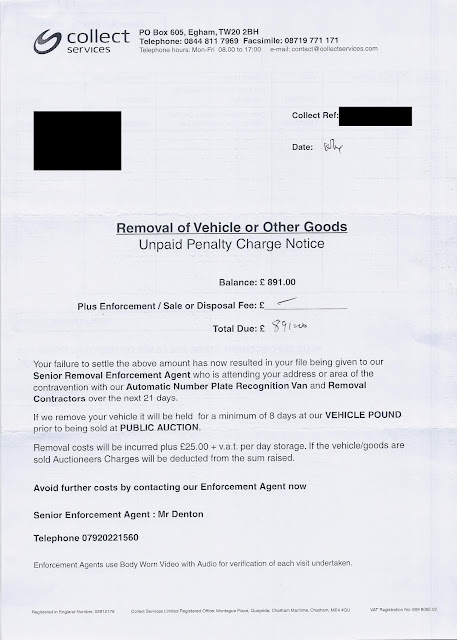 Mr Mustard wonders if Ealing Council keep a close enough eye on what their bailiffs get up to, whether sending the debts of Motability car drivers and blue badge holders to bailiffs is even reasonable given that the power of the bailiff is to seize goods and they can't seize the car (and secondhand household effects are pretty worthless) and whether sending 15 letters threatening the removal of an exempt item is harassment (a question which Mr Mustard will ask his lawyer tomorrow but feel free to comment if you are one).

It really isn't very attractive to threaten to break the law in order to enforce it.

How has it made the lady herself feel? Like this:

There are right and wrong ways of doing your job. If the above message is the result of how it is currently done, it is undoubtedly the wrong way.

Mr Mustard
Posted by Mr Mustard at 7:38 am