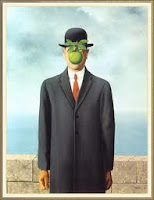 There is a museum dedicated to Magritte in Brussels which friends of Mr Mustard have just been to & he would like to visit. He hasn't seen Andrew Travers in a bowler hat but it is what senior civil servants used to wear years ago. Now to what Andrew has just sent to the staff (do they all know who he is?) about the JR along with, in red, Mr Mustard's comments.

The First Team update on Tuesday set out the provisional dates set for the Appeal Court hearings of 7 and 8 October. True.

Since then we have continued to explore with the Court whether those dates could be brought forward, but so far to no avail. What I haven't told you is that Maria Nash's lawyers have been available since they submitted the appeal and it is the council's QC Monica Carrs-Frisk who is busy on another trial so the delay is entirely down to the council's decision to stick with her.

We are looking at the possibility of instructing a new QC in the hope that could lead to an earlier date for a hearing, although this is still dependent on the Court listing. A new QC won't lead to any consultations being found as they don't exist.

We remain confident that permission to appeal will not be allowed and that the benefits to our residents will be delivered. Is it possible to read the mind of appeal Court judges with their superior brain power and extensive legal knowledge? This is guesswork or possibly based upon the advice of Trowers & Hamlins who would say that wouldn't they.

When this is confirmed we will sign the NSCSO contract. A.s.a.p.

The transfer of staff to Capita would take place shortly after. We can't get rid of staff quickly enough. Contrast with "continuing commitment" below.

The One Barnet programme is designed to protect and enhance our ability to serve our residents through an unprecedented period of austerity. The words "to protect" are not needed as they are followed by "to enhance" which aren't true anyway as One Barnet includes service cuts. We are not "our residents". You on the other hand represent "our council" except it has gone rogue on us. Mr Mustard thinks that some reading about the Great Depression is in order to question the use of "unprecedented".

The NSCSO contract will improve the quality of our services and will save an average of £12.5m per annum. Ask Mr Mustard if this is true in 2023.

This is £12.5m which would otherwise come largely from front-line service reductions. Well that is one choice. Getting every consultant & interim out of the North London Business Park, reducing the number of councillors from 63 to 21, not paying anyone more than £100,000 p.a., flattening the management structure and starting again with zero based budgets and becoming a boringly efficient organisation would be another way.

The DRS contract will improve the quality of our services, will save an average of £3.9m per annum which would otherwise largely come from front-line service reductions, and will create a growing Barnet-based business. Will other boroughs really agree to let Barnet make a profit out of providing services for them which would otherwise represent a saving in their own budget? For every winner there will be a loser. If having a Barnet based business is such a good thing why did you let NSL transfer the parking back office to Croydon?

Cabinet has carefully considered and approved these arrangements at all stages. So carefully that they haven't all read some or all of the NSCSO contract. Mr Mustard emailed all of the Cabinet as to how many pages they had each read. We know Richard Cornelius didn't read it as he said so and so his cabinet team are unlikely to have bothered; none responded to Mr Mustard's email (hello Cabinet member, it isn't too late to tell Mr Mustard you have read it all - what is that, oh an empty inbox).

The initial application for Judicial Review was not allowed by the High Court and permission to appeal was refused. The claimant has, nevertheless, sought permission direct from the Appeal Court. This is called following due process, unlike the missing consultations.

The council deeply regrets this. Officers are not the council, they are its servants even if that doesn't appear to be the case. Is this remark on behalf of councillors? Richard Cornelius said "everyone has a right to speak to the Courts" (except when it buggers our cunning plans up of course).

I am acutely aware of the challenges of continuing effective service delivery during this period of uncertainty which is not of our making. Who started this pig in a poke that is One Barnet then, as it wasn't the residents?

I remain very grateful for the continuing commitment of all staff affected by these projects. Why would anyone want to TUPE transfer out such a committed workforce? If this is the case why has £167,000 been committed to Capita to cover for holes in the staffing? see Mr Reasonable's blog here.

We will be putting additional measures in place to support the continued delivery of services during this period, and more information will be available shortly for the affected areas. Can't wait. Crisis, what crisis?