Someone who knows someone who knows Mr Mustard phoned him up. Mr Mustard's response is always the same, show him the paperwork. That was duly delivered, an evidence pack following a witness statement that representations had been made and a Notice of Rejection had not been received. That was problem number one, before we can even talk about the sign, the procedural hurdle.

When you make a witness statement on the ground that a Notice of Rejection was not received the council can either send you a copy and invite you to pay or make an Appeal to the tribunal (restoring you to where you would have been) or they simply refer the file to an adjudicator at the tribunal for directions. It's a bit bonkers but the tribunal send you a letter asking you to prove you made representations and if you don't respond to that letter they make a decision that the PCN is payable because you did not reply and yet when you look at what the council, Barking and Dagenham in this case, sent to the tribunal, it included both the representations and the Notice of Rejection so the tribunal are asking you a question they know the answer to and penalising you if you don't reply.

When Mr Mustard looked at the evidence pack he saw straight away what had gone wrong. Instead of the keeper of the car making the representations her grandson had done them. That was because she does not speak very good English it being her second language. The grandson's English is well up to scratch. He made the representations in his name (he happens to be an insured driver with Motability but isn't the keeper as that is the disabled person). Motability cars are noted at the DVLA by putting 04441 after the name of the person whose car it is. Now what should have happened is that the council should have pointed out they were in the wrong name and asked for confirmation they were on behalf of the keeper and confirmed that with her signature. They had acted promptly, on day 5 so there were still 23 days in which they could have been done again.

However, in this case, perhaps because the address was the same, the council instead issued a Notice of Rejection in the wrong name. Bingo, said Mr Mustard to himself. He had saved five previous tribunal decisions which all find that action to be wrong. Here is the earliest of them 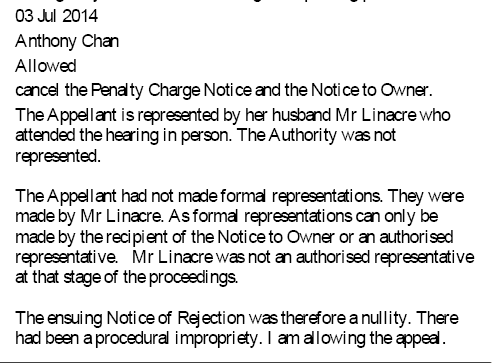 Mr Mustard has submitted this decision to the tribunal along with proof of the representations and is hopeful that the Direction will be either that there will be a hearing or that the PCN is cancelled. There is a slim possibility of rejection if the adjudicator is not persuaded by the prior decisions as they are not precedents.

On twitter Mr Mustard invited you to say if the time limit for a blue badge holder was 10 or 20 minutes or without limit. You should have been offered 3 hours as well.

The car was observed twice, 25 minutes apart. A PCN was issued for being parked for longer than permitted, a blue badge and clock were on display but a good photograph of them was not taken.

This is what the driver made as representations, twice, to Barking & Dagenham Council:

'I have checked online and on the disabled parking booklet where I can park and it states that even if there is a time limit for the bay, it does not include blue badge holders'.

The council's formal Notice of Rejection contained the following:

That official response makes no sense.

A blue badge holder gets 3 hours on a single or double yellow line provided that loading is not banned (and that will be indicated by short yellow marks across the kerb and a sign if the marks are single ones not double - which apply for 24 hours a day). Thus a time limit of 3 hours in the bay would be logical but is not correct.

If you said 10 minutes you would be wrong. Officially you can only stay 10 minutes but there is now a period of overstay of 10 minutes in a bay if you were previously legally parked, and whether it is a pay bay or a free bay and there is a traffic management order in place, and during that time you cannot be given a PCN (as an adjudicator told me, it is still a contravention, just one you cannot get a PCN for). 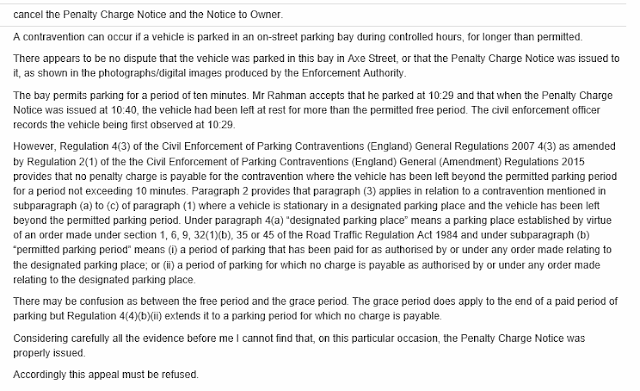 If you said a blue badge holder could park for an unlimited time you were correct. This is because of this law.

which says that traffic management orders ('TMO') written under S45 or S46 must exempt blue badge holders from payment, a time limit on length of stay or return.

Was the Barking & Dagenham TMO made under one of those sections Mr Mustard hears you ask. Well, Mr Mustard doesn't know for certain because instead of putting the on street Axe Street TMO into the evidence pack for the tribunal the council put the TMO for the off street car park at Axe Street service road instead so they haven't proved to the tribunal that they have the right to issue a PCN at that location in the first place. Those are the sort of blunders which happen all the time and help Mr Mustard obtain a high success rate.

However, the correct map based TMO was drawn up by the same company as produced Barnet's and the boilerplate for the Barnet TMO starts like this

and Mr Mustard would be surprised if the Barking & Dagenham TMO did not start in the same vein.

Mr Mustard went through all the tribunal decisions at this location in the hope of finding one which confirmed his point of view, he only found one that said the opposite:

but Mr Mustard thinks that is a defective decision, and would not have been made if he had been the representative, for two reasons:

for both of which he would have put the relevant law in front of the adjudicator who should have known of them in any event, but they decide cases upon the evidence in front of them so incorrect decisions get made (sometimes in favour of the motorist).

So in the not very humble opinion of Mr Mustard he is right and the council and one adjudicator are wrong. 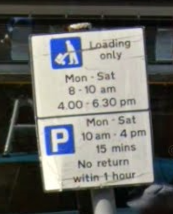 If he did, he certainly won't again. Blue badge holders, please put your blue badge and clock out when you park in these. If you get a PCN Mr Mustard will fight it for you.  Please don't park in them for 6 hours as that defeats the purpose of generating rapid turnover of vehicles in town centres and it will lead to the council changing the rules to put a time limit on blue badge parking, it would in all fairness be longer than 15 minutes as blue badge holders are not as mobile.

Remember that a 15 minute bay is actually a 25 minute bay for everyone, but not 26! No need to stress if there is a small queue for your takeaway coffee.

If councils like Barking and Dagenham were not so focused on making as much revenue as they can from parking PCN it is possible that someone with a heart or common sense or a sense of civic duty would have made due adjustment for a blue badge holder, who are disabled by definition, or that they might have taken seriously the politely presented argument of the motorist and asked a more senior colleague or researched the law or even asked the motorist to give them the on line link they had found or asked to see the booklet which had been referred to. They didn't though as their raison d'etre is revenue at all cost.

Mr Mustard will let you know the outcome, whether he prevails or not.