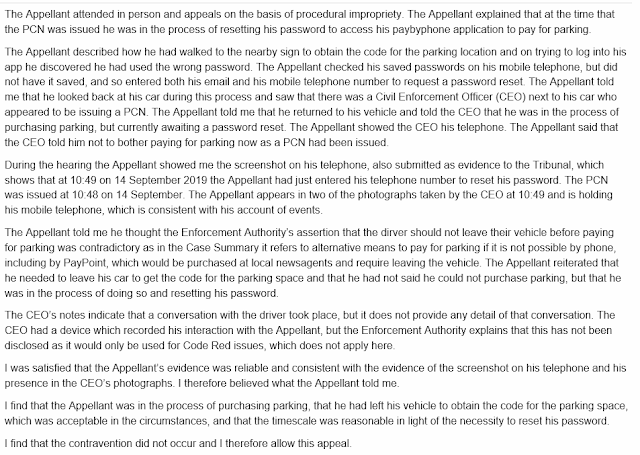 This event happened in the Broadway, Mill Hill.


The reason that traffic wardens need body worn video to record 'code red' situations, i.e. when they are about to be thumped, is because they have been ridiculously unreasonable in the past, pouncing with indecent haste on motorists who are in the act of paying. Mr Mustard would hazard that the main reason the council did not produce the video recording is that it showed 100% that what the motorist was saying was true.

A clever motorist who screenshot his phone screen (on an Android phone hold power and volume down for a couple of seconds simultaneously or on an iPhone press the side button and volume up at the same time) and thus he had evidence of what he was doing. The council could also have obtained from PayByPhone evidence of what button presses were made using the App at the relevant time but mysteriously didn't produce that evidence either.

A smart motorist who saw the flaw in the council's argument that you can't leave your car; if the sign is 25m away and a box luton van is parked in front of you then there is zero choice, Adjudicators are sharp as tacks and apply common sense, a commodity which is severely lacking in many traffic wardens and in the council back office.

As well as not producing evidence which was in favour of the motorist the council also appear to have misrepresented his position in the case summary for the tribunal (or in the Notice of Rejection, Mr Mustard has not seen the case papers). The council often appears to be desperate when you look at the way in which they deal with tribunal cases. If they continue to be partial, adjudicators will notice and motorists will get the benefit of the doubt due to the poor reputation of Barnet Council for knowingly not being even-handed.

This action will not have endeared Barnet Council to the motorist in question. Councils have been given too much power which they use in an unfair fashion in order to raise funds to help plug the budget gap.

Mr Mustard
Posted by Mr Mustard at 9:38 am