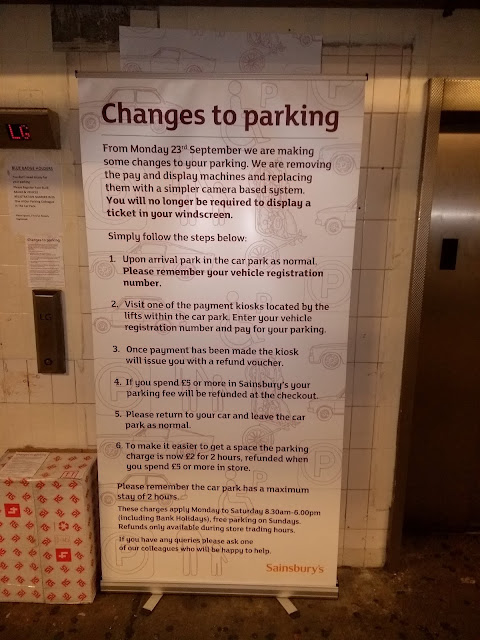 Last week Mr Mustard's alter ego had to pay a cheque into a Lloyds bank account for his work. There is no longer a Lloyds bank in High Barnet. He chose therefore to use the North Finchley branch. He thought he would park in Sainsbury's, do the banking and do some shopping at the same time. He needed milk, light bulbs, napkins, loose tea and he would probably have picked up some other items (red wine, always red wine on his shopping list) as he walked around the store.  It used to be the case* that you could park and leave within 2 hours without any fuss. Not any longer. Now you have to faff about paying £2 and then getting it back in store.

Guess what happened next? Yes, as soon as he saw the payment signs Mr Mustard drove straight out of the car park and parked on the edge of the cpz for free, walked to the bank and back, the exercise having done him good, and he bought what he wanted at his local Waitrose once home. Regular shoppers are probably going to get bored with wasting 5 or 10 minutes of their life lending Sainsbury's £2 each week for an hour and some will start shop elsewhere.

What else did Mr Mustard notice on a Wednesday morning at 09:40?
There were fewer than a dozen cars in the Sainsbury's car park.
When sales drop and stay dropped expect things to change.

If you can't live without Sainsbury's you will find that the New Barnet store does not have this rigmarole and has the same two hours free parking limit. It also contains an Argos which is quite handy and was very efficient when Mr Mustard used it last weekend, it being on his route.

* possibly longer ago than Mr Mustard recalls.
Posted by Mr Mustard at 9:00 am