The is set out above. A motorist, let's call them Frank, parks with their blue badge on a one hour single yellow line. Provided that loading is not prohibited, notified by yellow marks across the kerb and a sign plate with times (except when there are two marks together which means 24 hours) a motorist can park for up to 3 hours on a single yellow line. The reason for the clock, or disc as it is properly known, is to enable a passing traffic warden to know when you parked in order to establish if you had been there for more than 3 hours. The clock has no function if the yellow line only operates for a single hour, that is very simple logic.

Along came a traffic warden, keen as anything to issue a PCN and duly did so because the clock, which wasn't needed, was set to the wrong time. That was mistake number 1.

Frank challenged, expecting logic to take over. It didn't and the above is part of the response received. That was mistake number 2 by Barnet Council.

Frank wasn't happy so off to his MP he went. The MP duly passed the query on to Barnet Council and clearly doesn't have much logic themselves, and meekly accepted the council's assurance that the council were correct and Frank was in the wrong. Here is part of the response. 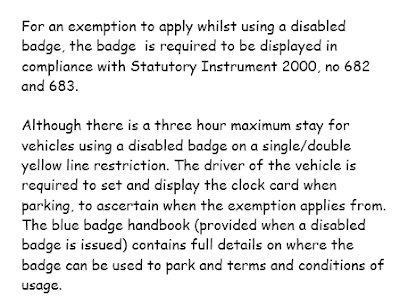 A senior officer, one would expect, looks at queries from MPs. Well if they were senior they weren't much cop as they too got it wrong. Ironically the Statutory Instrument they quoted gave the correct answer about the situation. What a pity they didn't read it. Mistake number 3.

At this point Frank contacted Mr Mustard who thought that the answers were not logical and so he carried out some research to confirm his thinking.

Mr Mustard wrote to the parking manager and all of a sudden some proper thought was applied to the situation. To save time Mr Mustard sent the manager the relevant section of the statutory instrument 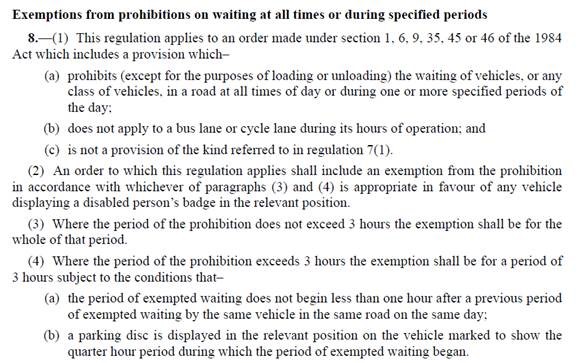 To precis for you the above regulations say that you don't need a parking clock for restrictions which do not exceed 3 hours. It took two weeks but then the PCN was cancelled and a brief apology was given. No flowers, no chocolates, no bottle of wine though.

Frank was relieved and grateful and will, on Mr Mustard's advice, display their clock every time they park even though they don't need to.

Now you blue badge holders know and so you won't meekly pay up if any council makes the same mistake as Barnet did. Simply email mrmustard@zoho.com for free help.