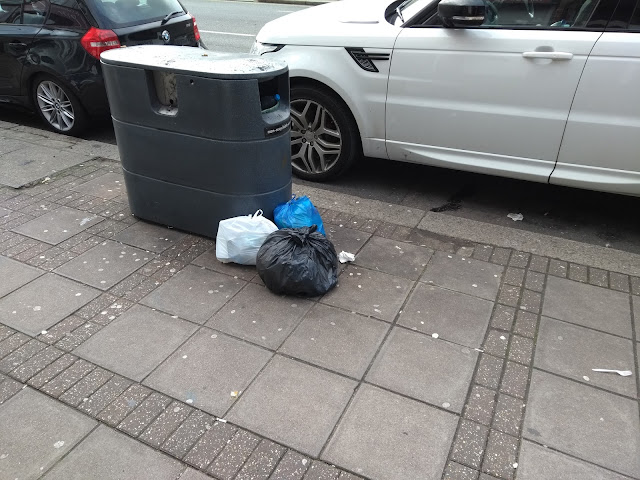 Mr Mustard was asked to assist a trader who has been given a Fixed Penalty Notice under the Environmental Protection Act 1990 s33(1)(a) for fly tipping. Mr Mustard hasn't bothered reading the Act because the lady is not guilty.

The problem stemmed from an employee of NSL Ltd on behalf of Barnet Council going through a pile of bags like the above and deciding that they were put there by the business 'Fake it' as their name was on a box inside a bag on the pile. It was inside a blue bag.

Just because one of those bags was put there by a particular individual does not mean the other two were. The waste complained of is household waste. A tanning salon generates almost no waste, a few empty spray tan containers and tissues, that is about the extent of it.

This business buys a supply of sacks from Barnet Council in order to dispose of its waste in a lawful manner. Here is one 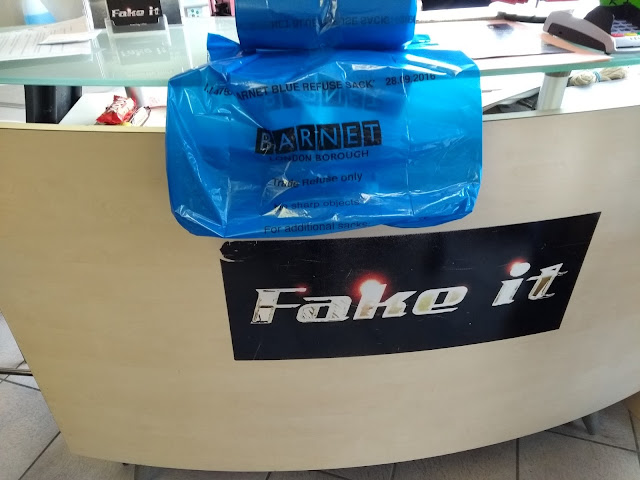 Why would this salon be putting household waste out in black sacks when the lady owner lives in the borough and has a huge wheelie bin for her household waste? & secondly look at the number of authorised blue bags she still has available to use (every year she throws away a quantity she has not used and which go out of date) 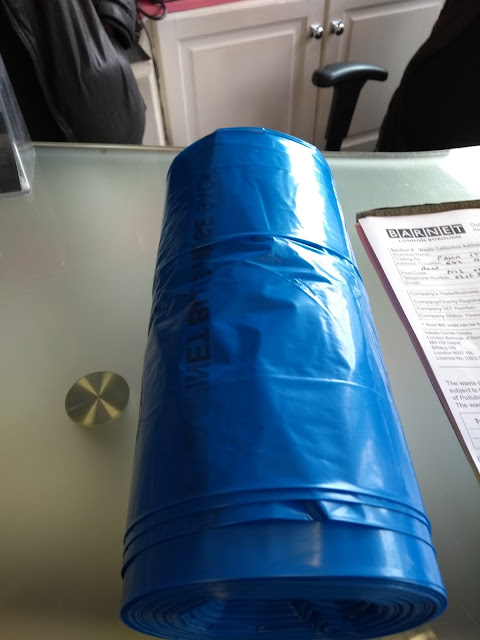 Whose household waste might it be which is placed next to the bin? (where the salon have been told to put their authorised blue waste bags). Mr Mustard hazards that it might well be the occupants of the flats upstairs who have nowhere to place their waste, they just don't have wheelie bins. Mr Mustard feels sure they stuff most of their waste into the public bins when they can but in his walk up and down the High Road he noticed that they were all pretty full, many to the point of overflowing.

The lady has already written to NSL explaining the situation and they instantly send one of the operatives back in to not listen to her perfectly reasonable explanation & to talk over her & poo poo everything she said. In the world of parking it is good practice that the people who issue the penalty notices and the ones who handle challenges are different teams who do not interact so that challenges get a less biased consideration. If a hectoring enforcement agent turns up again he will be told that Mr Musatrd is assisting the lady and that they should do everything in writing and to leave the shop.

Mr Mustard hasn't yet seen the latest enforcement contract but in March 17 the Environment Committee, rather foolishly in Mr Mustard's opinion, agreed that it could be on an income share model. It is possibly/probably the case that the council and NSL Ltd share the income 50/50. The trouble with such an arrangement is that if NSL accept a challenge, they don't make any money.

Guess what happens to perfectly good challenges? Yes, they are much more likely to get rejected.

The lady will now have to wait and see if the council decide to start a case in the magistrates court and if they do it will be defended but this is wrong, there is no evidence that the lady dumped anything on the pavement. She placed a council authorised disposal sack there and nothing else. What is being relied upon here is that many small traders would roll over and pay up for a quiet life but this one isn't going to, for the simple reason that she did not do it.

Mr Mustard doesn't like fly tipping but the council have incentivised their enforcement agents NSL Ltd to go after the wrong targets, don't target a business owner whose own contract for disposal is with the council and who has enough bags for at least half a tonne of waste.

Councillors really do need to think a bit harder about the implications of the contract that they agree to the terms of.