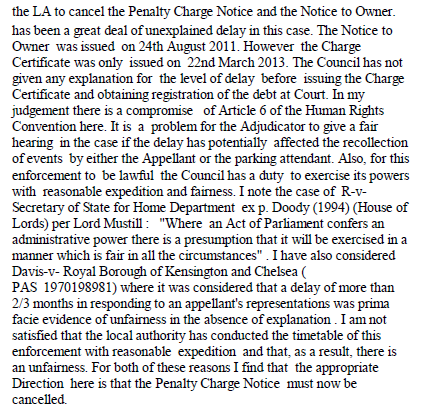 The above is an extract of a PATAS tribunal decision by an experienced adjudicator back in 2013. Mr Mustard has seen plenty of similar decisions and won some Barnet cases on that basis. Barnet Council tend to be more timely nowadays.

A few weeks ago a 2015 Harrow Council PCN landed on his desk. That surprised Mr Mustard so he thought he would see if it was one off or if there were many more. He therefore made the following Freedom of Information request:

Please provide the following data in relation to parking, moving traffic & bus lane contraventions for all PCNs which were registered at the TEC on or after 1 September 2017 up until 30 December 2017 but only where the Charge Certificate was issued before 1 January 2017.

Please provide this information as an unlocked spreadsheet by email to this address. No cells should be locked or protected.

Mr Mustard was duly sent a massive spreadsheet documenting a hideous catalogue of PCNs which should have been written off long ago. In the guidance issued by London Councils some time ago it said that councils should write off any PCNs where there had been a delay of 6 months at any stage of the process. It is only guidance but there needs to be a good reason to ignore it. There isn't a good reason. Here is the spreadsheet.
Late TEC Registrations for Publication by MisterMustard on Scribd


What Mr Mustard observes is that you should ignore negative numbers in the charge certificate days column as that just signifies that a fresh PCN or Notice to Owner has been issued.

The shortest delay between the Charge Certificate (when a PCN value gets increased by 50%) and the Order for Recovery when the PCN gets registered as a debt at Northampton County Court just prior to bailiffs being instructed. The longest delay was 1160 days which is more than 3 years.

Note that these are just 3 months worth of PCN which are being wrongly chased.

Now apart from Mr Mustard how many people would still have all PCN documents from 2014 for something which it appears the council have abandoned. Less than 1% of the populace probably. There is definite prejudice being caused to motorists by Harrow Council. The biggest problem is for people who moved, who destroyed the paperwork as the PCN hadn't moved for a year and who find out by a bailiff clamping their car that Harrow Council have been extraordinarily dilatory but they are put into the position where they really have to pay to get the clamp off and they will be lucky to see a refund.

What possible explanation can there be for some incompetence by Harrow Council? Mr Mustard thinks there is a great sadness within parking departments of councils generally if they write off any PCNs so they tend to leave them sitting there and then have another go at them later, perhaps when a new manager arrives, or the contractor changes, so instead of doing the decent thing as councils should they resurrect the PCNs and cause great anxiety and inconvenience.

The other reason of course to bring PCNs back from their moribund state is the revenue they will raise although it won't be that great a percentage. It must be enough to make rootling around in the archives worth the bother, always assuming anyone has measured the cost benefit?

The trouble with local authorities is that it is assumed by parliament that they will exercise their powers in a reasonable manner but they won't all do so. There is a definite need for a PCN ombudsman with teeth who keeps local authorities honest, especially in London which issues the majority of PCNs in England.

Mr Mustard is still jousting with Harrow about the PCN that started all this. He will report on that once it is over.

Mr Mustard
Posted by Mr Mustard at 7:00 am