Give Postman Pat lots of PCNs 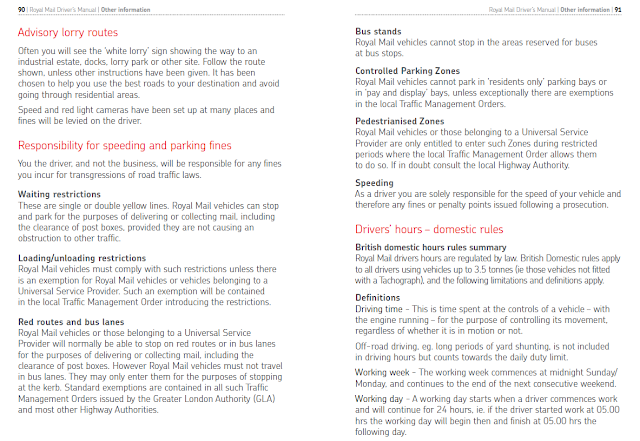 Mr Mustard notices things. In late 2016 he noticed that the Royal Mail, whose liveried vehicles he thought had a countrywide exemption (which he can't find) for parking on double yellow lines were being issued with PCN by Barnet Council at a fair old lick. He went to the parking tribunal website and searched 2016 for all Appellant company names which started with 'Royal Mail'. He found 68 entries across London. There are 32 London boroughs along with the City + TfL who dish out PCN so you would only expect 2 or 3 of those 68 to emanate from Barnet Council. How wrong he was. 32 of the PCNs were issued by Barnet Council which shows a clear indication that the council and/or their agents NSL Ltd had decided that the Royal Mail were fair game.

Mr Mustard has copied the Barnet decisions for you. 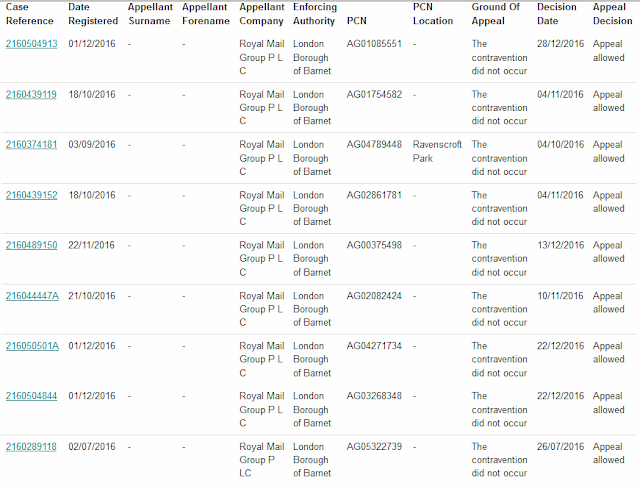 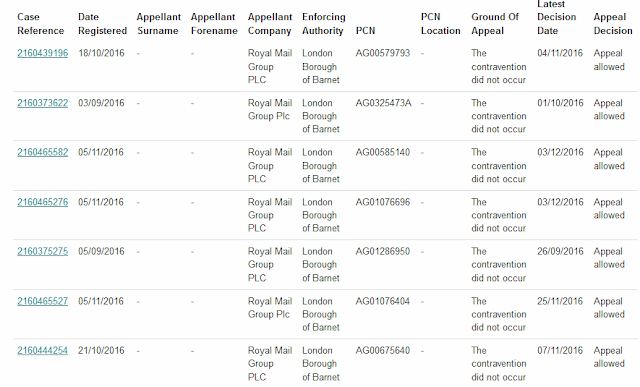 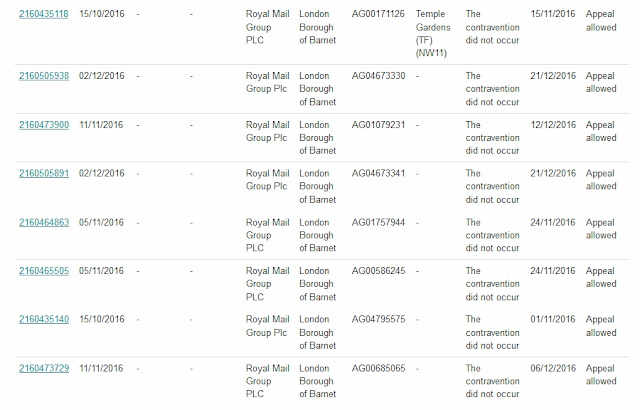 The first thing you notice is that there were no parking tickets issued from January to June. Did Royal Mail van drivers suddenly individually decide to change their parking habits? No, it is probably that someone instructed traffic wardens to issue PCNs to them. Mr Mustard will ask the parking manager to reverse that instruction.

This idea of targeting the Royal Mail has been a right royal waste of time for the council. Every PCN issued leads to a small fee of just under 47p that they have to pay to London Councils and each Appeal to London Tribunals entails a fee of £33.32 (it will be £29.90 once Barnet Appeals can be started on line rather than by a form sent off in the post).

Let us suppose all the PCNs were at the £110 rate. If Royal Mail rolled over and paid them all Barnet would have gained £55 a time or £1,760

However they didn't as Royal Mail contested them all so Barnet Council had to pay out £33 for each PCN = £1,056 in fees. Out of the 32 Appeals, Barnet Council only managed to win one so they netted £110 for that leaving them nursing a net loss of £946. They have also wasted a lot of driver and management time and NSL's and their own and the tribunal's. Had Royal Mail only provided proof of a parcel being delivered in the case they lost, they would also have won that one.

What deeply concerns Mr Mustard is that on 24 out of 32 Appeals the council offered no evidence (which you find out when you click on the case number on the left on the public tribunal register but Mr Mustard knows that a blank location means the Appeal was a "Do not Contest" case). In every case Barnet Council (and/or NSL) will have rejected representations (possibly twice) made by Royal Mail and then suddenly decided when their bluff is called to cancel the PCNs after all. Mr Mustard does not know how many other PCNs there were which were cancelled at earlier stages.

Mr Mustard thinks it is an abuse of process, and a breach of the council's general duty at law to be procedurally fair, to use the PCN enforcement system in this cynical way.

Your parking reputation is in tatters Barnet Council and is it any wonder?