Enfield PCN - no address to write to 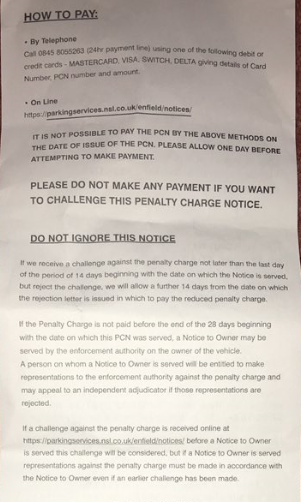 Mr Mustard currently has an Appeal running at London Tribunals on the basis that the PCN does not contain an address to which to write. Enfield Council think that providing a web address is adequate and Mr Mustard thinks that as the Regulations were written in 2007, when computers were less common, they are referring to a postal address. He also thinks that is necessary in order to comply with the Equality Act as those people (disproportionately elderly or disabled) who don't have a computer will be at a disadvantage.

The odd thing is that once the Notice to Owner is issued that contains an address which is:

so do use that if you prefer writing. Always use the Signed For service (it costs £1.74, money well spent)

What the council have done is rather than nudge you into using the on line system is to bludgeon you into it as you are left with no choice and if you do not respond to the PCN placed on your car you lose the chance to challenge and preserve the discount at the same time.

What Mr Mustard wants to know is if you have complained about the lack of an address as Enfield Council say that only Mr Mustard has complained (Mr Mustard can usually be bothered to complain whereas the public tend not to, especially in a techncial area like parking regulations).

You can of course add to any current PCN that you are challenging (only one placed on your car or put into your hand) the argument that the PCN is not compliant as it does not contain a physical address and that was the way in which you had wanted to communicate, i.e. by Royal Mail.

This is part of what Enfield Council have just told the tribunal:

However, the Council recognises a postal address would assist members of the public and will look to re-introduce this on the schedule 9 penalty charge notice (i.e. ones put on your vehicle).

If they win the day on the Appeal Mr Mustard thinks they won't bother.

Mr Mustard
Posted by Mr Mustard at 8:45 am