Mr Mustard has been informed that he is hopelessly wrong so he has edited this blog post. Apparently Barnet Council themselves are responsible for the permit address database fiasco & not Capita (sorry Capita).

Mr Mustard isn't talking about the Camelot run lottery (he's a bit over excited this morning having won the EuroMillions lottery yesterday evening - the £9.70 will get him a nice bottle of Rioja to share with his paramour) but about the permit reminder lottery. Not only have Barnet Council got the permit eligibility database in a right old mess with:

- some homes having the wrong postcode
- some homes not existing
- some homes listed twice
- a property with 3 flats having only 2 on the database
- some streets being in the database twice, think 'St' & 'St.'
- Barnet addresses containing the word London

and there may well be other problems and the unresolved problem is 4 months old, they've also got no idea who has a permit and it is Mr Mustard's guess that they have bolted the information together from various sources as some people don't get a permit reminder (despite 20+ years of relying on one) the first they realise the problem is when they are hit with a PCN, others got 4 reminders. A local resident passed 3 of his reminders on to Mr Mustard and kept the fourth one to actually process. A lady who lives not 20m away didn't get a reminder at all. They are both long term (decades) residents.

Here they are (two were posted on the very same day): 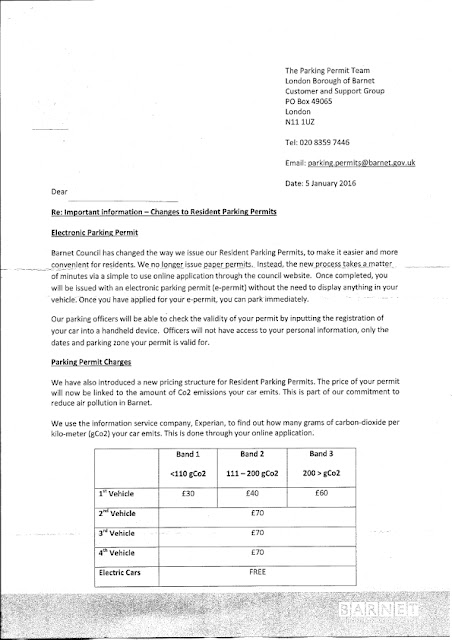 There wasn't an initial between 'Mr' and 'Smith' (not his real name) so if the household contained a father and his two sons, all of whom drove, they would not know which of them the letter was intended for and there wasn't a car registration number on it either.

Electronic renewal and permits does not make the process 'easier and more convenient'. If you don't have a computer you still have to phone up and obtain a form to complete. Once received by the council the permit team then find that your address doesn't exist and you run into time trouble. If only you could visit your local library with your paperwork and have staff do the renewal on line for you?

Emissions based charges only apply to the first car, this is not made clear, so try to renew the car with the least CO2 first.

Four additional cars was voted through, not 4 cars in total at one address.

Air pollution will hardly change in Barnet as only about 10% of cars are inside CPZs and if you are spending £40,000 on a car, will an extra £30 for your permit make you change your mind and buy a lower CO2 model? (no of course not). 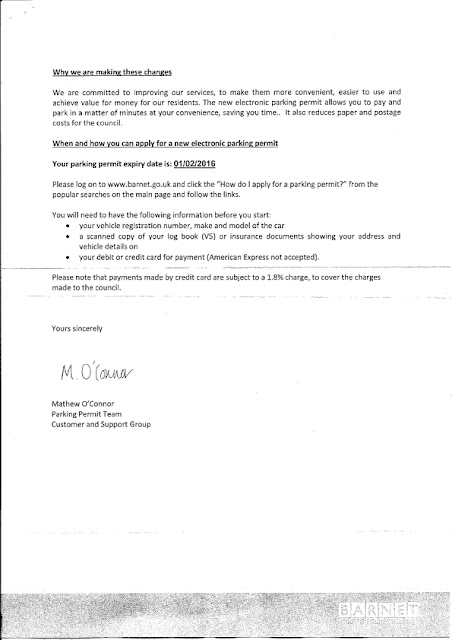 Mr Mustard has just checked his October 2015 credit card bill. The permit charge was £40 not £40.72 so an extra 1.8% isn't being charged (unless of course you know different). 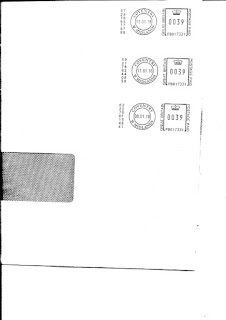 Mr Mustard thinks that the only reminders which will be sent from now on are emails so if you renew manually you'll have to put a note somewhere that you will see it regularly (now that there isn't a permit on your car which you might happen to notice the date of). This would be a failure, in his view, to make due adjustment for the elderly and the disabled.