Beam me up Scotty


and to The Archer (good for all news of East Finchley) themselves for giving permission to reproduce the following article from their February 16 monthly newspaper. 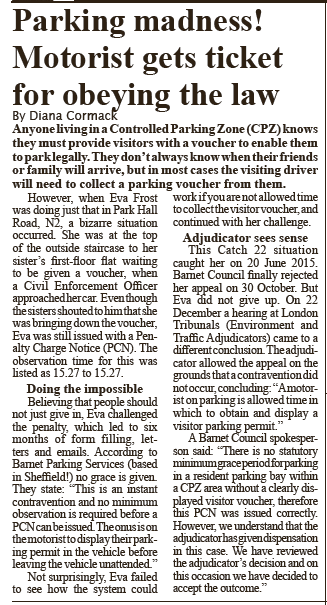 To add some detail, it is common for instant PCN to be given which completely lacks common-sense or fairness but the traffic warden must speed on his/her way to issue as many PCN as humanly possible, even though there aren't targets, no sirree.

Barnet Parking Services are not in Sheffield, a scanning machine is. Back Office parking is in Croydon (of course) senior management are in the North London Business Park (for now) and traffic wardens are based in Solar House in North Finchley. Joined up government if ever there was any. Oh yes, and permits seem to be processed by Capita in Coventry although that isn't very clear at present.

Eva is bang on the money.

The adjudicator, as quoted above, was correct and was much milder than some adjudicators on the subject of getting a visitor permit beamed from a property to a car without human help (perhaps we will all soon have to own a drone to send the voucher down to the car?).

The council are obliged to accept the decision of the adjudicator unless he applied the law wrongly which he didn't so they were stuck and had no say in the matter, they just have to suck it up.

The council will still use this stupid idea in their letters of rejection. Be like Eva, fight them to the end, it costs the council c. £33 in tribunal fees. If you need help with a similar PCN please email copies to mrmustard@zoho.com