Mr Mustard recently helped a resident of Richmond with her pavement parking PCN and was victorious thanks to the council muddling up its signs and lines which confused residents into parking in the "wrong" place, except it was correct once the arguments were properly presented. The resident was organised and understood her road signs and Mr Mustard had to do little other than provide moral support at the adjudicators.

One thing he did like about Richmond, apart from the lovely riverside walk he went on after he surveyed the road, and the good food and beer at The Anglers, was that the council software provides a clear view of the progress of the PCN, as below 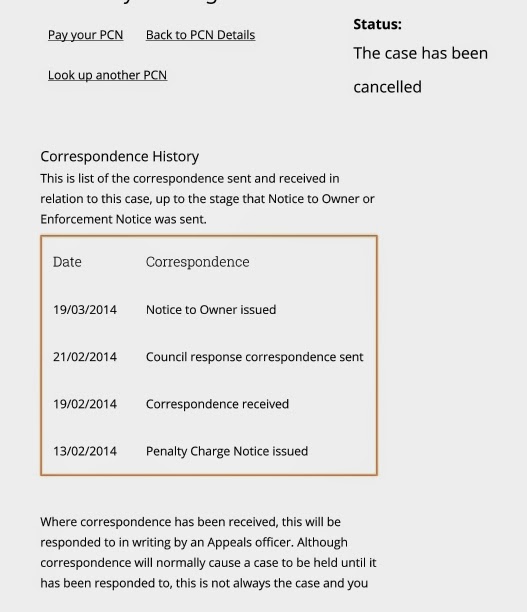 This useful screen should be extended to show the progress all the way to the end of the road and include the formal representations stage and the PATAS stage in so far as the PATAS appeal has been logged and that the council's evidence has been filed. Mr Mustard would prefer the oldest item at the top but that is a minor criticism.

Mr Mustard has suggested the same facility would be most useful in Barnet for motorists to follow the progress of their PCN and it would probably cut down calls to the call centre to find out what is going on, that the council have received your letter etc.

The parking manager was amenable to the idea and it will go off to the ICES software people as a user suggestion. It will be at least 12 months though before fruition even if the idea was accepted today as a good one.