Mean what you say & say what you mean 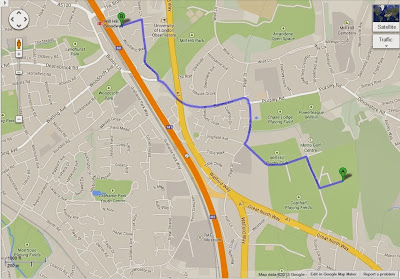 The above route to the stadium from Sylvan Avenue in NW7 illustrates the ludicrous size of the Event Day zone. How many rugby fans would actually park that far away from the ground and then walk? It isn't really a surprise that a resident of Sylvan Ave, adjacent to Mill Hill Broadway thinks that they aren't in the Event Day zone and then don't apply for their free permit especially when they call the council to check.

Here is what the adjudicator at PATAS had to say:

The Appellant attended for a personal hearing at which he explained that he is a resident of Sylvan Avenue (NW7) and had been the holder of a residents permit before the Controlled Parking Zone was introduced. He received the introductory letter from the Authority dated 12th November 2012 in which the new scheme was explained but he was confused about the requirement to display 'either a residents or a visitor voucher in their vehicle'. He therefore telephoned the Authority and spoke to a female assistant in the parking department who explained to him that as a resident he would be expected to display his residents permit in his vehicle on match days and that the special 'Saracens' permits were for those residents who did not have residents permits but who were at present allowed free parking on Saturdays and Sundays. The letter of 12th November also included the dates of the matches, concluding with a match on 4th May 2013.

As a result of this information the Appellant continued to park his car in front of his house on match days displaying his residents permit. He did not receive any Penalty Charge Notices until 4th May. However although he then resolved to look into the matter he believed that the season was over and was not expecting to be issued with a Penalty Charge Notice on 12th May.

The Authority relies on the record of the civil enforcement officer in these cases. The officer's notes contain full details and are not contested. There are also a number of photographs.

I found the Appellant to be a reasonable and credible witness and I accept that he was given the information referred to in his evidence. I find that he was lead to believe that he would not be issued with Penalty Charge Notices if he displayed his residents permit on match days.

Where a public authority has issued a promise or adopted a practice which represents how it proposes to act in a given area, the law will require the promise or practice to be honoured unless there is good reason not to do so (Abdi v Home Dept 22/11/05 Laws LJ).

In those circumstances these appeals are allowed.

Mr Mustard hasn't seen an appeal to PATAS in the Event Day zone fail yet.