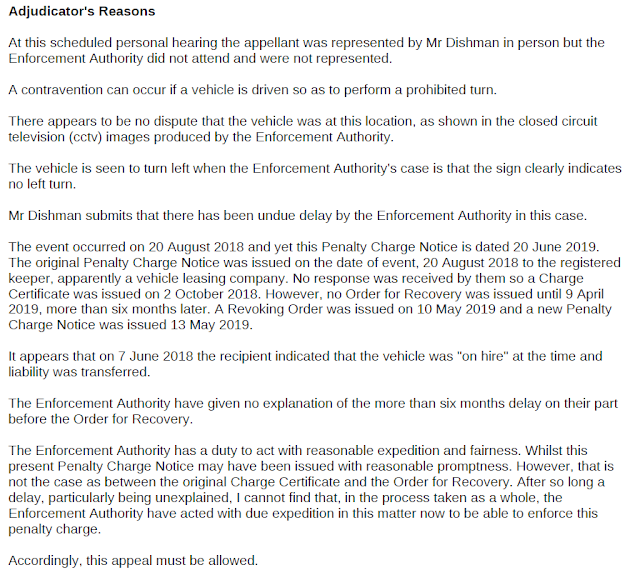 Readers with good memories will recall that Mr Mustard wrote about Harrow being horrible at the start of 2018, the back story is here.

It might have been the case that Harrow Council just got a little bit behind and their slowness was a one off which they should then have fixed. Unfortunately that is not the case as twice this week Mr Mustard has been contacted by clients who hadn't heard from Harrow Council for a year and then suddenly they did. If his clients thought the PCNs were over due to council neglect they would be correct in principle but wrong in practice as Mr Mustard checks every PCN twice a month to make sure nothing gets away from him.

The case with the worse delay has the following timeline:

You can see that Harrow Council have been sat on their hands for 33 months.

The Order for Recovery was sent to the same address as the PCN. Luckily the recipient had not moved home. If you had moved home in 2018 would you notify the council of your change of address from 2016? No, I didn't think you would. Nor would you have a postal redirection for more than 12 months, most people probably only have 3 or 6 months of redirection given how so much documentation now arrives by email.

Mr Mustard recommends that if you have had a Harrow PCN in the last 5 years that you contact them and ask them for the number (give them your car registration and date of purchase) and ask them to tell you the current balance of every PCN ever issued since you bought the vehicle and if it is not zero, to tell you the dates of all the statutory documents they have issued.

If you have moved you could do this even if you don't think you have had a PCN as it may have gone to your old address. Mr Mustard also recommends leaving a note for the incoming resident with your new address, as he did recently for a house he sold and he left a few parking visitor vouchers to help them in their moving in period - they were very pleased and have already dropped a final utility bill letter through his door. (Another tip, he read the gas, electric & water meters hours before they moved in and left a note of them at the property to save the buyers the time of performing the same task.)

What happens next to a PCN, if you don't file a witness statement (or statutory declaration in moving traffic cases) is that a bailiff will be instructed. If the bailiff finds the car, and most people don't move far and bailiff vans have ANPR, is that it will be clamped. As all of the paperwork will have been sent to your old address and you haven't been served with at least one obligatory statutory document Mr Mustard does not think you have been properly served but it is you who has the problem, a wheel clamp on your vehicle, which you may need urgently, so you end up paying. This is grossly unfair.

In this way, by being incompetent, Harrow Council and their bailiffs profit at your expense. That is unjust.

Once Mr Mustard has the current PCN sorted out, he will file a complaint with the council and if they don't apologise he will go to the LGO. He will also complain to the Iinformation Commissioner as the council, having abandoned enforcement of the PCN by their failure to act expeditiously, they no longer have the right to process your data.

After writing this blog post Mr Mustard decided to look through decisions made at the tribunal in October 19 & he found this one: 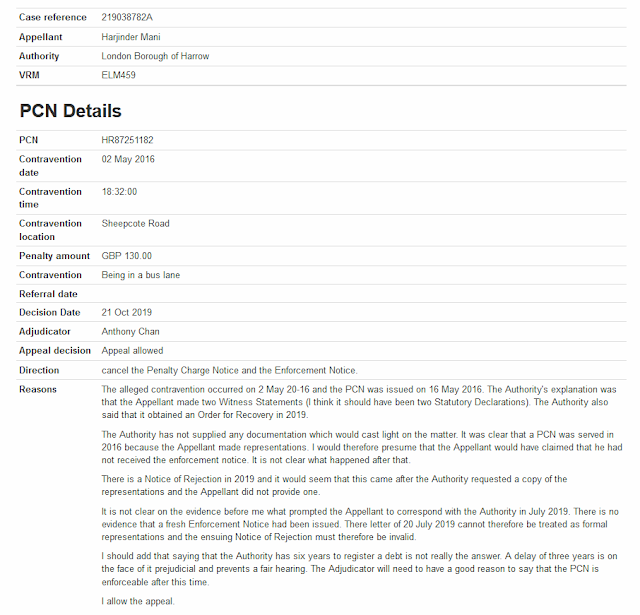 Councils are meant to learn from the decisions of Adjudicators, Harrow haven't learnt a thing and are plouging ahead with PCNs which they know is prejudicial.