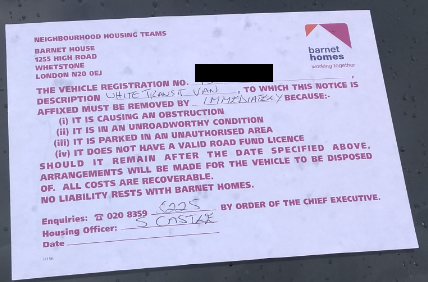 Wandering down Salisbury Road, past Hart Lodge, housing for old people, Mr Mustard noticed that a white Transit van had a Barnet Homes sticker on it. He took a photo, as above.

Oh dear, thought Mr Mustard, the van probably shouldn't be there but you can't do what Barnet Homes are threatening to do, that's even worse. It brings a council into (even more) disrepute if their ALMO goes around threatening to break the law.

The leaflet doesn't say which reason they are going to illegally remove the vehicle for so let's go through them.

i - It isn't, it is neatly parked in a space.
ii - It isn't & it could only be removed if it was on the public highway.
iii - True but since the advent of the Protection of Freedoms Act clamping or removal is banned. Barnet Homes could relocate the vehicle but only within the same car park. This one is usually 3/4 empty.
iv - Oh yes it does.

You had best take some other action Barnet Homes such as looking in the windscreen at the dozens of documents on top of the dashboard to see if there is an owner's name on any of them, or contact the DVLA and then pop round to see if the owner is ok - they could have been visiting a resident (have you asked them all) taken ill & be in a hospital bed. The owner could have amnesia or been arrested or what have you.

Alternatively, you could put up a barrier at the entrance and stop the problem from ever happening again, that is called car park management.

Do not break the law Barnet Homes. I am watching you.