Zero tolerance - not the best approach. 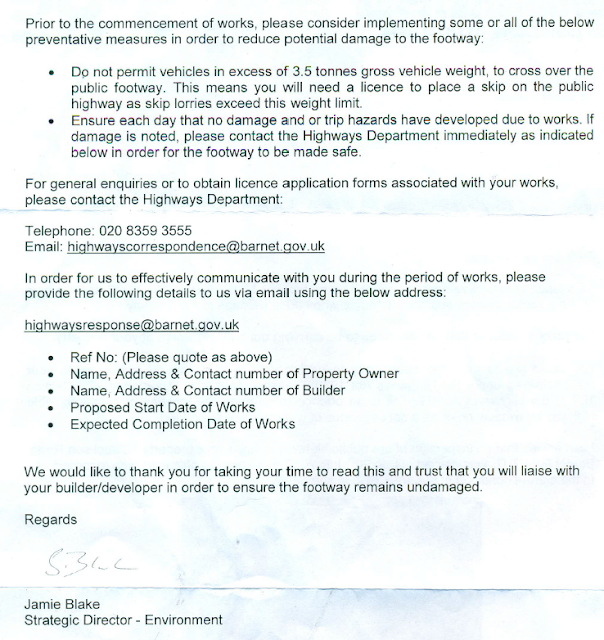 A contact sent the above letter to Mr Mustard. Although it purports to be a standard letter Mr Mustard has chosen to anonymize it to protect the innocent.

Mr Mustard thinks that these letters are being sent to anyone who has been granted planning permission or permitted development consent but you dear reader can confirm that. He gleans this from 'Our records indicate'.

The letter is addressed to the owner/occupier. If you are going to threaten someone with damages and expenses the least you can do is to use their name Barnet Council / Capita / Re:.

This is what the appropriate section of the Act says

Mr Mustard doesn't know the answer but the heading is about excavations, or other works, to land. Works to buildings, are they within the compass of this section?*

Mr Mustard thinks that as a first approach to a previously law abiding resident this is completely the wrong approach. The thrust of the letter should be that the council are sure that residents will want to ask their builder to be careful on the foot way and that the council would regret having to try and hold the land owner (if you have a leasehold property can you send the council to the freeholder instead?) responsible. Isn't it going to be the case that the owner will just be able to say that they haven't carried out any works to the land or building and so the council should pursue the builder in any event as the person responsible, if anyone, for any damage?

Before you have an extension or a loft built Mr Mustard advises you to take photographs and video of the pavement for 50m in both directions from your property to show the probably hideous state that the pavement is already in.

That looks like nonsense about having to put skips on the highway (kerching for the council who have large fees for that) as the wheels of the skip lorry don't necessarily have to go on the pavement in order to lift a skip in or out or a load spreader plate could be used to protect the highway.

Do other boroughs take such a confrontational stance before you've even instructed a builder?

The following document takes you to the Environment committee meeting at which this matter was discussed.

* A general legal definition does have land as including buildings but there may be case law on this?
Posted by Mr Mustard at 6:00 am