What is the point of PCN? 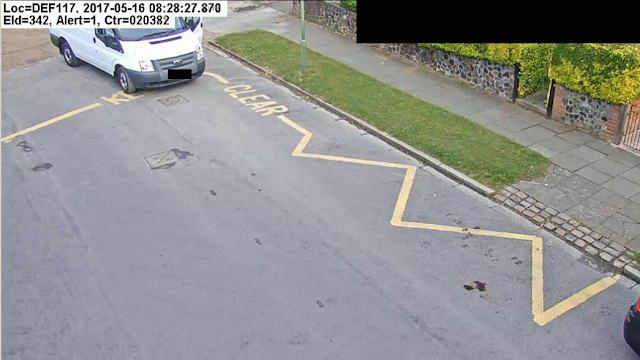 What is the point of issuing Penalty Charge Notices? It is to try and force behavioural change by exacting a penalty for wrongdoing so that you learn not to do it again.

We must also look at the purposive nature of the restriction and not penalise anyone who innocently gets in the way because rules is rules (and because councils are addicted to the revenue).

In this case white van man (actually a highly skilled tradesman; Mr Mustard has seen some of his excellent work) lives in the private road which is behind him. At the closed end of the private road there is an entrance to the back of the school which the kids use. Thus the school keep clear markings are aimed at ensuring parents don't drop their kids off at the school 'entrance' except it isn't really an entrance to the school as the road is private and no vehicles may access the school by that route. The residents have had to chain their road off as that is the only way to keep out parents in cars. Each time the residents go in and out they have to unlock/lock the chain.

On the day in question the van stopped slightly further forward than normal and the driver has just put the wheels on the markings. The council computer or an 'officer' (member of staff) saw fit to issue a PCN (the footage is supposedly checked before the decision is made to issue a PCN, Mr Mustard doubts the common sense of the person who signed this PCN off in these circumstances) which was challenged by the driver / vehicle owner (one and the same).

The vehicle is registered to an address in the private road, the circumstances were clearly explained and cancellation was anticipated. Oh no, the council maintain that a contravention has occurred. Well it has but that doesn't meet the purposive nature of the keep clear markings. Part of what they said was:

The CCTV footage shows your vehicle stopped on the marked restriction.

The circumstances do not warrant an exemption to the contravention: vehicles' (sic) must not stop on the markings. The yellow road markings are in place to keep entrances clear and safe for children coming in and out of schools. I would advise that you park off the markings to exit or enter the road.

Question. Are the children safer if the van stops 0.5m short of where it did?
Answer. No.

Question 2. Are the children safer if the van moved forward 5m and stopped in the road?
Answer. No, and the traffic will be disrupted.

Question 3. Is the marking aimed at residents of the private road?
Answer. No, of course not.

Question 4. Is the council addicted to raising revenue from motorists.
Answer. Oh, yes.

The PCN is now going to the tribunal where an independent adjudicator will rule on the matter. Mr Mustard has now taken over, whizzed up a skeleton argument and will attend the hearing in due course.

Technically the motorist is in the wrong but this is a situation that was crying out for a warning PCN for £0.00 but the council don't make any money out of those. Although they send warning PCNs for the first 4 weeks of any new location being enforced by camera clearly white van man didn't overshoot during that time (or the enforcement may have started when the schools were closed during which time school zig zags are not enforced although the policy says they are).

This is the sort of bureaucratic pettifogging revenue raising pointless PCN which does the council's reputation no good at all.