About a year ago Mr Mustard picked a useful argument up from somewhere, probably an appeal decision that he had read, to the effect that Barnet Council were wrong to use the word 'will' in their Notice of Rejection of Representations, rather than the word 'may', as allowed for in the legislation. On such little differences the outcome of a PCN can depend, as the meaning of the words differ greatly.

For all that time Barnet Council have insisted that the word 'will' was substantially compliant and some adjudicators did agree with them but more didn't and Mr Mustard could lose on the parking grounds but then win on the technicality.

This is what the Notice of Rejection used to look like:

and this is a typical decision made by an independent adjudicator, whose job is, of course, to apply the law, in case 2160097842: 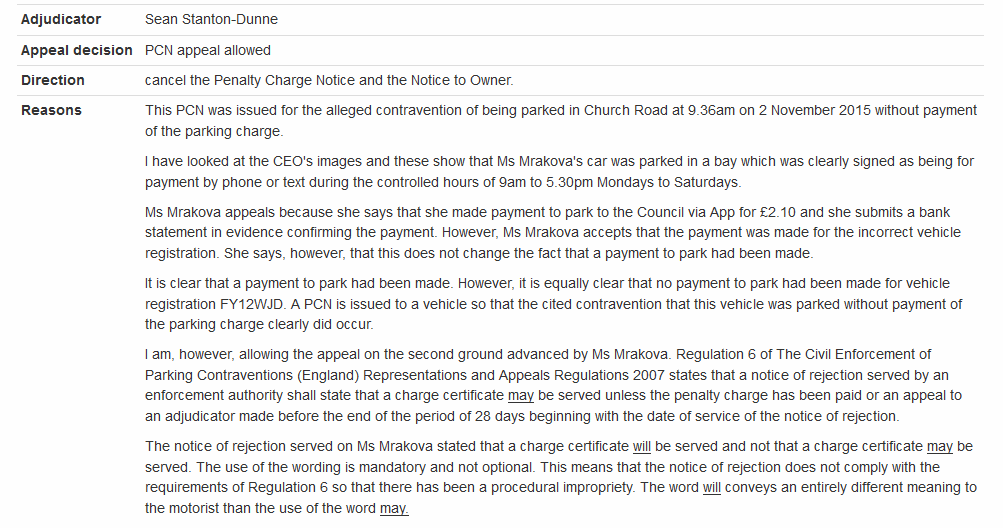 So if you already have a Notice of Rejection in your possession and you may even have already lodged an Appeal at London Tribunals (they used to be called PATAS) and if your Notice of Rejection also contains the offending word 'will', then you may as well add the extra point of appeal to your case as it may save you from having to pay out funds.

After resisting for a year Barnet Council bowed to the inevitable and changed the word (they will say the old word was not wrong and they have only changed as a precautionary measure. Mr Mustard will find other arguments of general assistance & tends not to rely only on his safety net in any event). The Notice of Rejection, since early June?, now looks like this:

You can't, sadly, go back over previous PCN and demand a refund as once paid, they cannot be reopened.

Email ThisBlogThis!Share to TwitterShare to FacebookShare to Pinterest
Labels: barnet council, london tribunals, may, notice of rejection, patas, pcn, will