Lyonsdown School zig zags - be a courteous driver & get a PCN in the post! 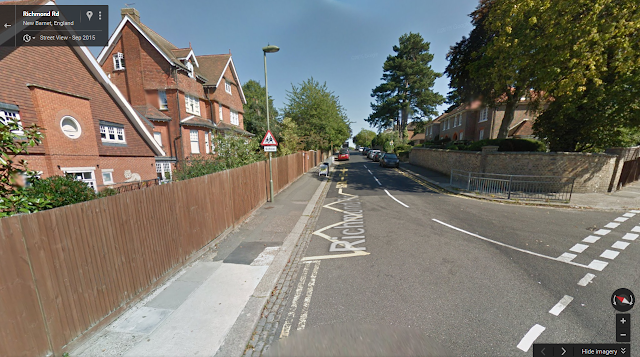 Mr Mustard's client needed to drive along Richmond Rd, EN5. She was not collecting or dropping off children on the zig-zags. She came around the corner and could not proceed through the centre of the road because of oncoming traffic. She was there at least 10 seconds (the cctv finishes before she moves off - what a surprise) and where else can you stop your car except on the left hand side of the road where the keep clear (zig-zag) markings are?

Enforcement at this location is by automated camera. The selected cctv footage is then supposedly reviewed by a staff member to check it before a PCN is issued. Something tells Mr Mustard that the council (or NSL) aren't checking to see if you were stopped from proceeding by oncoming traffic. Mr Mustard will request a procedural change with the parking manager to try and prevent stupid PCN being issued i.e. a longer clip of footage needs to be reviewed. In the clip Mr Mustard has seen the driver's hand is still on the wheel and no-one gets in or out of the car. A challenge to that effect has been rejected by the council. Mr Mustard will see them at the tribunal.

Mr Mustard will in the meantime drive down this road during the operative hours, with his crash cam running, to test the system.


Please see below (the innocent trap problem was explained by Mr Mustard) – it does look like this is a problem which could be easily fixed if the yellow lines were extended further up the road.

Do you know whether this issue has been raised previously as from the current layout of this section of road I suspect it happens on a regular basis.

Could you review and respond to Mr. Mustard please.

Another parking employee then said this

Paul, hi, I have looked at the evidence that we have supplied on this case and although there is not an additional vehicle seen, the driver was still within the vehicle and that there was no attempt for anyone to alight.

I have spoken to colleagues within this section and it was agreed that there are circumstances due to the road layout, that may cause this type of stopping to be a course of action for a driver. I have since requested that the CCTV footage be extended ( should be completed today) and have requested that Highways look at the current layout of the yellow lines to see if they could undertake to extend the DYL (on the opposite kerb) and install a SYL from the SKC* going east.

I have also requested that on this occasion that we close the case due to mitigation although this will not set a precedent for this area as each case will reviewed on a case by case basis.

Mr Mustard is pleased to see such a speedy and positive response. Credit where it is due.