The incompetence of TfL

Having chased the MD of TfL on 12 February and then again on 16 March, Mr Mustard finally received a response from an employee of TfL today.

It tells him that they did add a name to the address on file on 13 August after receiveing Mr Mustard's letter but they didn't tell him that at the time.

It also re-issued the PCN to his client on that day. TfL maintained that sending two PCN for the same contravention was fair enough. The matter will not now be tested in front of an adjudicator as TfL have wisely decided to cancel the PCN as a 'gesture of goodwill' which rarely means what it says in Mr Mustard's experience.

TfL also state that they will be accepting online queries and representations 'in due course' (this in a letter which doesn't give Mr Mustard an email address or a phone number! Anyone would think that TfL don't like hearing from him).

Is it incompetence or ignorance, is it arrogance, is it stupidity or is it intransigence? but what it isn't is equitable.

TfL, acting through their agents, (not quite sure whom) sent a PCN for the alleged contravention of 'performing a prohibited no left turn' in Battersea, to the building in which Mr Mustard's client resided. Yes, that is correct they sent a PCN to a building. Let us call it "Stable Cottage Barnet". It is a requirement of the London Local Authorities and Transport for London Act 2003 (which governs moving traffic offences) that a PCN is served on a 'person' which isn't defined but would logically include any body that could register a car and thus does not include a building. The PCN was issued on 10 July. The contravention had occurred on 3 June and presumably a PCN was originally sent to the vehicle hire company who will have provided a copy of the hire agreement and then a new in time PCN has been issued.

Mr Mustard helpfully wrote to TfL in Darlington (as they don't have a working email system!) on 13 August to point out the error. He expected the PCN to be cancelled and that would be that.

Mr Mustard kept an eye on the balance on the TfL website and up until 30 October it was £130 with the note " Representations under review".

Then on 14 November it was £195 "Charge Certificate issued" which was rather sudden as neither Mr Mustard nor his client, an occupier of Stable Cottage, had been extended the courtesy of a reply to the August (in both senses) letter.

Mr Mustard decided the time had come to phone up and stop the rot. He spoke to a man, let's call him Keith, who put Mr Mustard on hold (the on hold musak at TfL 0343 222 3333 is the sort of sound that a suspect would be played whilst in solitary confinement to break you down before questioning) whilst he spoke to the representations team. This is inefficient. Just let Mr Mustard speak to the representations officers directly as we talk the same language. The response was that the PCN would be cancelled and a new one issued to Charlie Cook (his client, not his real name). Mr Mustard pointed out that in his letter of 13 August he had pointed out that TfL were out of time to re-issue. Keith said TfL had 6 months. He also said the contravention had occurred and Charlie could always make representations. Oh dear, now Mr Mustard was peeved about 2 things. He pointed out that TfL were about to break the law in order to enforce it which just isn't right. He also pointed out that a PCN was a document which set out a contravention which TfL believed had occurred and that the contravention was only proven at the end of the process when an independent adjudicator had ruled on any Appeal. He also said his client shouldn't have to defend himself from a PCN which TfL had no right to send. Mr Mustard's gander was up by now.

He couldn't find the section of the Act about time limits for issuing PCN so said he would call back, suffer another 5 minutes wait, and then tell TfL what the rules were.

Mr Mustard phoned back 5 minutes later, waited another 5 minutes and then was put through the ridiculous security questions for the second time. He was unlucky and didn't get Keith again, even though not many of them were in the call centre he said (hence why Mr Mustard had to wait 5 minutes twice) but got Katrina (not her real name).

Mr Mustard explained the rules about service of a moving traffic PCN: 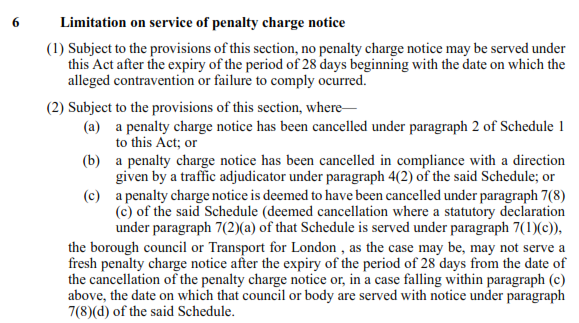 Paragraphs 6(2) a,b & c did not apply and more than 28 days had gone since the alleged contravention had occurred on 3 June so TfL have no power to issue a PCN, they would be acting outside of their powers (ultra vires). Katrina said they had the right to re-issue "at any time" (not likely as otherwise you could be sent a PCN in 2015 which related to your driving in 2010). Katrina said she had discussed para 6 with the Representations team and they would send a new PCN. Mr Mustard felt it unreasonable that his client should have to defend himself from an invalid PCN and so asked to be put through to complaints. Katrina took the details.

The complaint has 3 strands:

1. TfL claim to have a year in which to issue a PCN, please provide the evidence for that statement which Mr Mustard regards as incorrect.

3. Operatives are making statements which might lead a less experienced caller (99.9% of them will know less than Mr Mustard) to give in and pay up. He did not complain about the operative themselves as they are doubtless working from a script and under the erroneous policy guidance of TfL.


It is clearly not equitable that TfL try and obtain monies from motorists in a situation where they don't have the right to issue a PCN. Mr Mustard wonders how many illegal PCN there are? Funny isn't it? A motorist goes wrong and TfL want £130. Tfl go wrong and they want £130. Something not quite right there?

Other things TfL really need to do are:
Had TfL been a bit sharper and less avaricious they would avoid the time and expense of another case going to adjudication at London Tribunals and a complaint to manage.

Mr Mustard will update this post with the outcome in due course.

TfL must be given credit for having a telephone number that you can contact them on. Not having one is pretty stupid as it makes sorting some things out much more difficult, as it would have in this case, although the calls were 'difficult' ones, probably at least as far as TfL were concerned because Mr Mustard brooks no nonsense from anybody.

Many London boroughs do not have a telephone number you can contact them on and this ignores the fact that in order to comply with the Equality Act a facility should be provided for those people who own a vehicle (they may not drive it) but are disabled and cannot write or are not literate. The borough are meant to listen to their verbal representations, write them down and send a copy to the person making them. This is known as making due adjustment. It is mostly out of London that Mr Mustard has seen council's take their responsibilities towards the disabled more seriously.

This possibility is rarely mentioned on the London PCN that Mr Mustard sees and should be.