Mr Mustard's lack of enchantment with Barnet First, a publication by Barnet Council, which strikes him as rather a waste of money and trees, has just multiplied ten-fold. 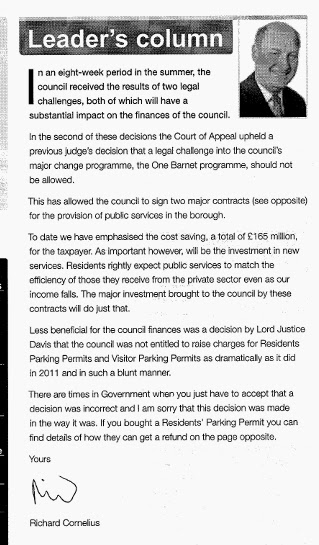 Let us examine one line from this "column"

The major investment brought to the council by these contracts will do just that.

For more than 2 years we have been told that Barnet Council couldn't afford to develop services in-house because they cost too much and because the necessary capital investment wasn't available. Huzzah, like some shining white knight appearing on the horizon just in the nick of time, appeared Capita waving a big cheque to fund the investment.

Are they a Charity? no, they are a mega-corp with over 500 companies registered at Companies House

Do they help council's out of the goodness of their heart? No, they do it to make money, pure and simple (and not an objectionable principle, that is why Mr Mustard does what he does for a living)

Have they given us £16.1 million which they have plucked out of the pockets of other boroughs to give to Barnet? No, it would be absolutely wrong to do such a thing.
NSCSO Capital Investment - Barnet Council DPR by MisterMustard

So there is your answer at the bottom of this page and the start of the next. On the very first day of the contract Barnet Council gave Capita a thumping great cheque for £16.1m to pay for the investment that Capita were supposedly making. Don't blame Capita, all the mis-representation has, ironically, been by our own representatives.

Mr Mustard has been against the One Barnet contracts all along, not on ideological grounds as he himself provides an out-sourced service, but on the grounds that he didn't think they would be better quality or better value or provide any savings that a competent management couldn't make by themselves. One Barnet could be renamed the "we council wallahs can't be bothered in Barnet" contract, although that doesn't so glibly roll off the tongue.

So having been sold a turkey we might as well listen to the Turkey rag to cheer ourselves up again.

How long before your turkey votes for Christmas, eh Richard (Cornelius)? Only 198 days until your flock of turkeys are stuffed.

p.s. Don't believe everything you read in the papers is a well known saying of which Barnet First is proof.