Mr Mustard was sad (but is OK now) 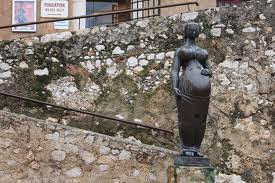 At the end of September Mr Mustard was sad. A lady phoned, early one evening, whose car had been taken by the bailiff on behalf of Barnet Council when she was outside the health centre with her toddler (not yet 2) and her disabled grandmother as, having just moved flat, she didn't have the £450 that the bailiff demanded otherwise he would remove her car. When dealing with bailiffs time is of the essence and Mr Mustard was on his way out to a meeting and was also at the hospital the next morning for a procedure and so he just couldn't help. Instead he passed the caller on to a bailiff advice line.

The lady, we'll call her Miss Ford, had 3 parking tickets from 2012 that she didn't know about for two reasons. The first was that she wasn't driving the car at the relevant times; her sister, now living abroad, was the driver and hadn't given her the parking tickets (always assuming she did get them as a lot do go missing). The second reason was that she lived in a block of flats each of which had its own letterbox but the postman used to leave the post in the communal hall. Sadly, the main street door was not locked and so anyone could steal the post which also happens a lot to facilitate identity theft.

So just like my other recent bailiff case, of Mr Toyota, the first that Miss Ford knew was when she had the shock of coming out of the health centre and seeing her car with a clamp on it. She had to call a minicab to get home.

Now there is a procedure within the legislation which is meant to provide justice in situations like this one. The motorist files a witness statement within 28 days of receiving the Order for Recovery. If you don't get the Order for Recovery then you file a witness statement out of time and explain why you are late in applying which must be the reason why you didn't get the various council documents. The flaw in this procedure is that the council can oppose it and they appear to routinely oppose such applications pretending that all is right with the world when it obviously wasn't (the use of bailiffs for PCN is a subject on which Mr Mustard plans to write in detail with his recommendations to the Chief Operating Officer). The application is considered by Court staff at the Traffic Enforcement Centre (TEC) attached to Northampton County Court. It is a sausage machine for churning out PCN related matters which otherwise all the local county courts would have to deal with. It would be better if each local county court did handle applications for its area as then local knowledge would build up and a more considered approach could be taken.

If the Out of Time witness statement is rejected, and this takes 4 to 6 weeks to process, during which time your car is stuck in the car pound, then you can ask for the matter to be considered by your local County Court. You can have a paper based decision (a bad idea as you can't influence an undecided judge) but a far better idea is to pay £80 and have an audience with a District Judge. The previous case, of Mr Toyota, took 3 months to get in front of the judge and during this time your car remains stuck in the car pound. If you convince the judge to allow your witness statement out of time the PCN is rolled back to the start so that you can make representations, or the case is referred to PATAS, and your car is released. If you don't convince the judge then you need to settle the £1,000+ bailiff bill or your vehicle will be sold and probably for less than it is worth on the open market.

In the case of Miss Ford the council (NSL) opposed the Out of Time witness statement on the grounds that they had sent everything to the address shown on the vehicle log book even though they knew of the postal delivery difficulties. They simply wanted to keep the enormous advantage they had over a by then 7 months pregnant lady. There was no compassion, sympathy or empathy in the internal emails Mr Mustard has seen; it was, per the council / NSL, all her own fault that she didn't get her post, post which she wasn't expecting to receive and she received all her bills by email so a letter was a rare event. The TEC duly refused the application. That was when Mr Mustard became involved as he had finished with his hospital visits.

He studied the 3 PCN. Let us call them 1, 2 & 3. He had 14 days in which to file the application to be heard in the local county court although he was minded to do a deal to have certainty and to save time and court fees.

Pre dated December 12 so had invalid wording.
The locus of High Rd (FN) was too vague a description as Miss Ford wouldn't know where in the High Rd due to her not being present when the PCN was handed to the driver.

Pre dated December 12 so had invalid wording.
The Charge Certificate was issued 26 days after the Notice to Owner whereas 28 days is the minimum clear period.

Pre dated December 12 so had invalid wording.
There was a delay of 9 months between the Charge Certificate and the Order for recovery whereas there should not be more than 6 months.

Mr Mustard's main concern was to get the car back so despite Barnet Council being procedurally incorrect on all cases a settlement deal was offered of £110 (the value of one PCN) in return for the return of the car and the closure of all 3 files.

The counter-offer received was that the council agreed to unequivocally cancel PCN1 & PCN2 if a reduced fee of £450 was paid for PCN3 which they felt was OK. Now Mr Mustard had written 3 pages of detailed argument about:
and got a page and a half in response.

One vital piece of information received in the reply was about the service of the Charge Certificate and Mr Mustard was told (full marks for honesty to the parking client side person involved) that it had been returned undelivered by the Royal Mail.

That was the smoking gun. That document being returned meant that the council (acting by their agents NSL) were not entitled to issue the Order for Recovery and weren't entitled to instruct a bailiff to seize the car. Oh dear.

Why did Mr Mustard ask this question? It was because he had put the 3 council witness statements (actually signed by an NSL employee whose identity Mr Mustard has chosen to redact as he must be junior and that is the deal Mr Mustard has with the Chief Operating Officer) side by side and noticed a sentence that wasn't there. Here they are:

So Mr Mustard wrote again to the parking client side of Barnet Council and copied in the Chief Operating Officer in the undoubted belief that he wouldn't be impressed with the council (NSL) cheating and pointed out that the Notice Processing Officer would have a hard time in front of the District Judge and that regulation 22 of the General Regulations 2007 had been breached. Although Mr Mustard could now demand the return of the car for nothing he would stick with his £110 without prejudice offer. It only took a little over 24 hours for this to be accepted and it has been paid so the pregnant lady (now 8 months) can collect her car and once again start taking her disabled grandmother to weekly medical appointments. Mr Mustard's sadness receded.

What does it show us though?

There is a Notice Processing Officer at NSL who is not doing the right thing.
The parking client side at the council can't properly monitor NSL's behaviour at a distance.
The parking client side are honest.
Misdemeanours like this have the potential to ruin the reputation of the council and they would have been a long time recovering if they had sold this car off.
The NSL contract needs a through auditing as to whether they follow the PCN process properly.
If NSL own the bailiff involved, TASK in this case, which they do, then the temptation to say no to everything to make more money for NSL must be enormous.
Once the council / NSL have you backed into a corner they don't want to let you out even if right is on your side (this episode has taken Mr Mustard two months to the day to resolve during which time a pregnant innocent lady has suffered without the use of her car).
It's all about the money.
The use of bailiffs to collect PCN is a big stick for a little problem.
Outsourcing carries huge risks and parking is the last service that should have been outsourced.