So if you aren't too bored already with the official explanation of why everything in the council garden is rosy, read on. Mr Mustard will try and simplify it all for you whilst also trying to bury the argument (can't have a co-writer for all that long and there are other fish to fry). This blog is by Mr Mustard alone.

OK, back to the start. The Barnet Bloggers often raise matters which would otherwise be blissfully ignored. Think of us as the conscience of the council, critical friends (sometimes more the former than the latter) unpaid external (armchair) auditors, an early warning system of what is going wrong or has gone wrong and who stop councillors from carrying out their worst excesses through the fear of being caught and exposed.

Mr Mustard is the newest of the 4 but is already 2 years 7 months and 4 days old himself so now has a fair amount of corporate council history in his brain and being a debt collector has an elephantine memory.

The unnumbered (they usually have a number) Delegated Powers Report ("DPR") in which the £16.1m payment by Barnet Council to Capita came to light refers to a meeting of Cabinet of 6 December 12 which includes the following words:

Capita’s proposal also includes (within the financial offer described above) approximately £8m investment in areas such as information technology (computer hardware and software), and customer services. This investment not only enables Capita to deliver the transformation it is proposing, but also avoids the Council having to find money in the future to fund replacement technology for systems that are at or nearing the end of their useful life.

Capita’s proposal includes a £2.3m investment in the data gathering and storage platforms required to undertake the complex analysis required to develop policy and commissioning strategies.

Capita’s proposal also includes (within the financial offer described above) approximately £15.3m revenue investment in areas such as information technology (computer hardware and software), and customer services. This investment not only enables Capita to deliver the transformation it is proposing, but also avoids the Council having to find money in the future to fund replacement technology for systems that are at or nearing the end of their useful life.

The council has limited capability to secure and manage the significant investment, transformation and remodelling required for these service to preserve service levels, achieve strategic objectives and reduce cost.

One advantage of signing with Capita was given as:

The Council secures upfront investment in the technology and transformation required by the services which it is able to pay back over the life of the contract.

About the then estimated £17.5m investment by Capita

Capita has planned investment of £17.5m to transform the services. This investment will be made by the NSCSO for the most part in the early years of the partnership and recovered through the core service payments made by the Council.

and about funding generally

This means that for a significant proportion of the partnership the Partner will be required to run a level of working capital/project finance before becoming cash positive in later years.

So if the DPR didn't contain authorisation of a payment to Capita, per Chris's letter of 11 November 13, well neither did the Cabinet meeting unless the blue (secret) papers included figures for cash flow and statements that were directly contradictory to the public ones and that wouldn't be open and transparent, now would it?

Did the Cabinet understand what they were signing? Perhaps not, which is why Chris's office is being deluged with requests for information. Now I think that Chris remains on the Barnet payroll but I think that his deputy and team of 40 probably now work for Capita, so is Mr Mustard bothered about them having to do some work? no, not at all. Capita failed to heed the warning signs that The One Barnet contracts might be one contract too many.

The cash flow question is a very simple one which any cabinet member should be able to understand, or find the answer to in all the reports that they will have carefully read from cover to cover (just like bloggers eh Brian, reading council papers at midnight with a moist gusset - funny but not true) so if dear Cabinet member you are out of your depth, best get out of the little pond that you are drowning in.

If the bloggers had wanted to hear from the S151 officer, they would have written to him. We wanted to hear from councillors and although we write out of courtesy to them all the ones who should reply know who they are, in this case the Cabinet who decided to rule out the in-house option at the very beginning on the basis they had no money for investment and then magically found £16.1m in cash knocking about with no other plan to spend it but didn't mention this fundamental change at the time.

Now Chris Naylor is the accountant and Richard Cornelius isn't.

Chris tells us that the Council has cash in hand of £200 million, although not official reserves, which would fund the necessary investment at least 12 times over so the council have made a grave mistake in ruling out the in-house option which they could afford to invest in because if they had they could have made similar savings to capita, or if the council managed by incompetents who don't know how to make savings?

What reserves did Corny tell us we had?

Oh dear me, only £15m, what was that then Richard, a slip of the tongue or a complete lack of knowledge of the council that you run? I think you owe me, the bloggers, staff you are making redundant and every council tax paper in Barnet an explanation, don't you? It will have to be a good one.

Here are the actual reserves. Naturally they can often move from one column to another. 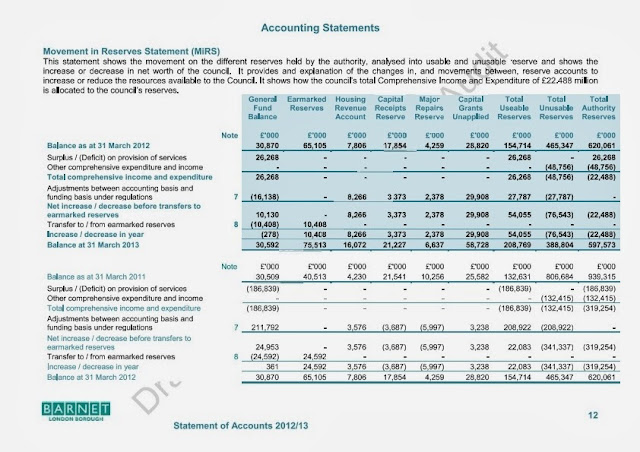 Chris - please stop writing to me, this is not your problem. We can discuss briefly on Tuesday. I am more interested in recovering the car that the NSL owned bailiffs took from a lady who is 6 months pregnant, with a small child and a disabled grandmother who she has to take to hospital every week and with whom the council have shown not the least sign of any empathy, understanding or compassion.