Here is another example of the standard letter PD07. The trouble with standard letters is that you have to fit the motorist into a square hole and they might be a round peg. An off the shelf solution to what is a custom made question. It will not work all the time. 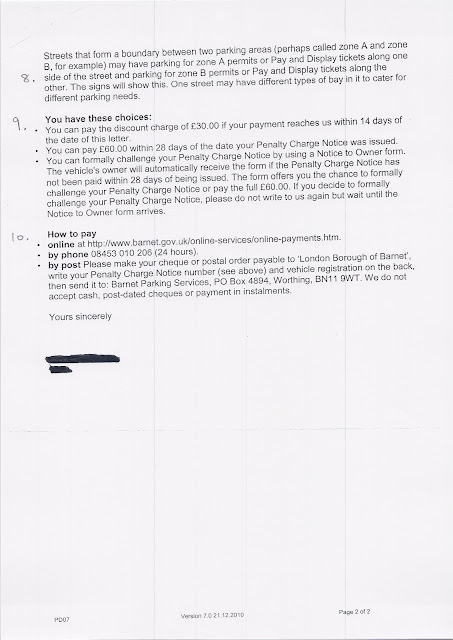 Mr Mustard's comments, which follow the numbers down the side of the letter.

2. The first redaction is the date in the format dd/mm/yyyy hh/mm/ss.  The second redaction is the vehicle registration plate and the third is the location with the cpz zone in brackets after the road name. The words "issued on" should appear before the date and the time is not needed especially the seconds. It would be better if the contravention description was placed in speech marks. I think something is also missing after "which was received" maybe the phrase "on dd/mm/yyyy".

3. This is probably the case for every single parking ticket (PCN)

4. I don't think a negative can show anywhere. "A payment did not show on the handheld equipment of the civil enforcement officer" would be better wording although the sentence is probably superfluous and could be cut.

5. Almost correct except that there are 2 signs. The first one gives the times of the bay and the options for payment and the second sign probably on the other side of the pole gives detailed instructions.

6. This looks like a whopping great big lie. This ticket relates to one of the North Finchley parking swoop tickets when all the signs where changed one morning and simultaneously a gang of traffic wardens arrived and gave tickets to every motorist who had parked quite properly and was then faced with changed circumstances i.e. a blacked out sign turned into a new sign whilst they were away from their car. Can any trader in North Finchley tell him if signs had been up for weeks saying that other signs were to be replaced? (One trader has already confirmed that there were no such signs).

Mr Mustard is himself a regular visitor to North Finchley. Two points from this.

Firstly, why does it take weeks to change a sign when the council has a sign workshop?

Secondly, what is a motorist expected to do, hang around waiting for the sign to be changed? If you receive this sentence in a letter write back and demand to see the evidence.

9. Note the reference to a "letter" which was a "Notice" on the first page.

The letter/Notice says that the Notice to Owner will be issued 28 days after the PCN. That is 9 October. The motorist does not have it yet. The reason, which is not mentioned in the letter, is that after an informal challenge has been received the 28 days have to start again so this letter/Notice is just plain wrong.

This is what you get under One Barnet outsourcing. Firms like NSL Ltd who plainly don't know what they are doing and in trying to provide a service for less money provide a worse one than the council's own staff used to.

It is your name on these letters Barnet Council. You get the brickbats. You need to start sorting out the NSL back office; prior to 1 May, the council back office worked.