Nextdoor is a cesspit

My friend Jess Gold was the victim of some inattentive driving, by the driver of a van exiting a side road, New Oak Road, into Long Lane which she was cycling along on her Brompton. The van has come over a give way line without checking that the route was clear. Jess was, unsurprisingly, all shook up after being deposited off her bike and failed to get the details of the witness. We need to find her. Here are the details: 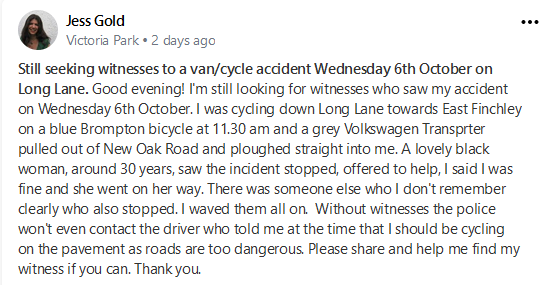 The only point of this post was to try and find the witness who happened to be black and by saying that it helps to find her although if you were wandering along Long Lane that day and saw what happened your evidence will be useful no matter what your skin colour is.
One of the responses would be astonishing if it was said to you at a social soiree but seems to be pretty normal for Nextdoor 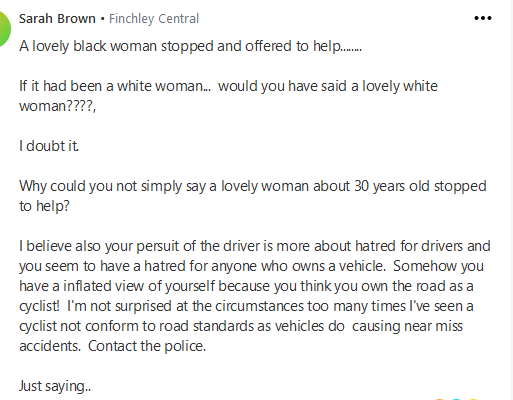 I don't see a problem in stating skin colour in this instance and saying a lovely white woman would also have narrowed the field as to who Jess needs to make contact with.
The rant goes up to 11 though in the longer paragraph and is completely irrelevant to the subject in hand and not really what you want to read when you have been the innocent party, knocked off your bike and which luckily left Jess without broken bones, just a bit battered.

What do we know about Jess? This

She has also gone into print about the A1000 dedicated cycle lane. What the public probably don't know about Jess is that she has a toddler who she takes out in her cargo bike and it is fortunate that she was not on that bike on that fateful day.

Her profile is silent on the question of drivers and she is absolutely entitled to 'pursue' (note the bad spelling of 'persuit') the offending driver and I would do the same (although it would be easier as I usually have cameras running front and rear).

There is no evidence that Jess hates everyone who drives, she herself rents a vehicle when it is necessary.

Being in favour of cleaner air for everyone, in favour of a safe dedicated bike lane can only be good, she isn't campaigning to remove cars from the A1000, just to keep the current space allocation and there isn't a shred of evidence to support the viewpoint that she thinks she 'owns the road'.

How cycling along the major road when a van comes out of the side road, over a give way lane and takes you out can be equated to a cyclist not conforming to 'road standards' is quite a stretch of the facts.

This is why I don't do or say much on nextdoor and one friend has deleted her account.

Now, on the helpful side, we need to find the 30 year old black lady and anyone else who was in that vicinity on Wednesday 6 October 21 at about 11:30am