The Unhappy Man (with a PCN)

So here we are in 2018, a lovely view of a local pub in Englefield Green and no single yellow line but the pub reserving road space (they may or may not have a delivery coming but still shouldn't put trip hazards in the road). There are no single yellow lines in this road at this time, only doubles to stop obstructive and/or dangerous parking. 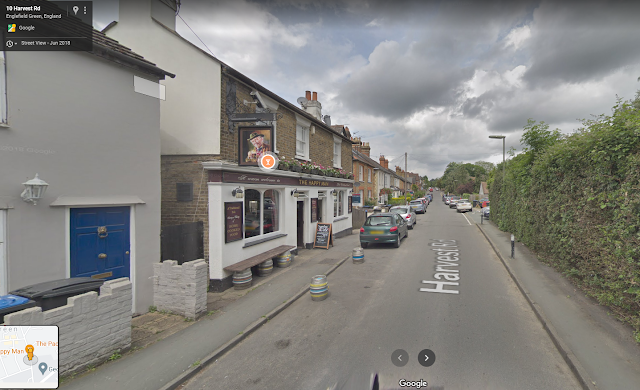 The tall hedge on the right is now gone, replaced by a small development that is close to completion.

Mr Mustard contributes to the PePiPoo forum (silly name but a good site) where you can get good free advice on various problems with officialdom including for private parking charges which Mr Mustard doesn't fight.

He came across this question.

Mr Mustard took a look at the images which had been made available: 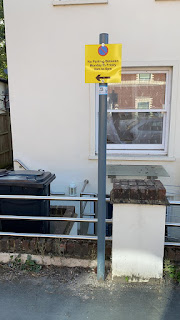 Mr Mustard knew immediately that this wasn't a council sign (or else the sign shop is staffed by nincompoops, not the case, they are employed to patrol the streets). The reasons are:

- the screws holding the sign to the pole are not the way that signs are affixed, always done with an adjustable metal hoop at the back. Also, none of the pole should stick out above the sign.

- the roundel is correct but it is so universally recognised that no words are required. Oddly, you might think, the roundel means 'no waiting' not 'no parking'. Look at the similar signs where you are, they have no words and 'no parking' is not an authorised variant of the sign.

- Between means Tuesday to Thursday. The PCN was issued on a Monday so isn't valid.

- Between the time and the am/pm suffix should be a space.

- The arrow is superfluous. There is no line in the opposite direction. Guidance requires one sign within 15m of each end of the line and at 60m intervals on long lines.

In summary, only the roundel is correct (although Mr Mustard hasn't had the opportunity to measure it & it too could be wrong).

It may surprise you to know that traffic wardens don't know what the Traffic Order, which sets out the rules for each section of road, says. They rely on the same signs as the motorist. In order to issue a PCN the following applies:

If the traffic warden was competent, he/she would not hold the belief that a penalty charge was payable, as no contravention can occur unless adequate legally compliant signage is in place.

Since this PCN was issued, two things have happened

1 - the line has been painted out and the signs removed. This is because the traffic section was asked if the signs and line should be there. At least the council can be praised for their swift action in that regard.

2 - The PCN has been challenged as to not do so would, at the next stage, make the registered keeper guilty by default.

Who painted the line and erected the signs remains a mystery. It could have been the builders who wanted more room to get lorries in and out of their site (the sign & lines arrived once work had commenced) or the pub, who seem to regard the road space as their own. It could equally have been anybody else but that will probably remain a mystery. Here is the scene today: 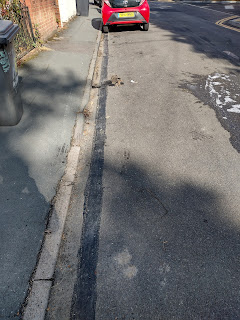 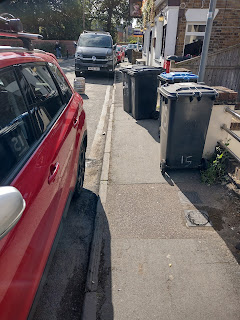 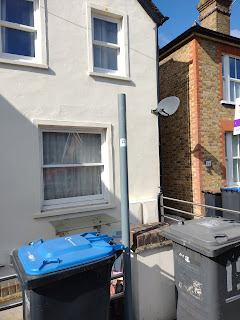 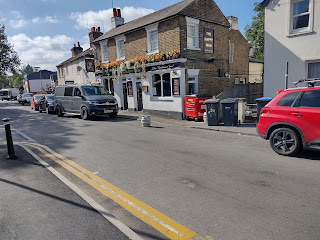 A barrel across the dropped kerb is partly understandable but still shouldn't be there.

Whilst we are on the question of signs, here are some more that Mr Mustard has spotted in his travels. 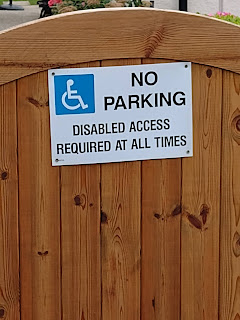 The sign above, seen whilst on a walk in Bramfield (try the lovely pub, The Grandison with good beer and food) makes the same 'No parking' error. 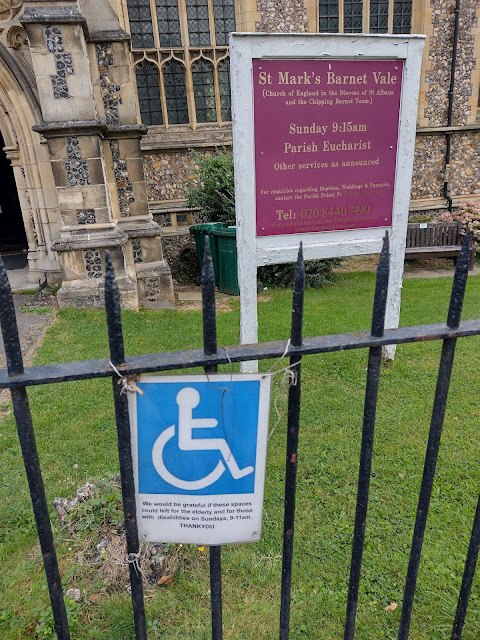 At least this sign in The Meadway ask politely and says Thank You. 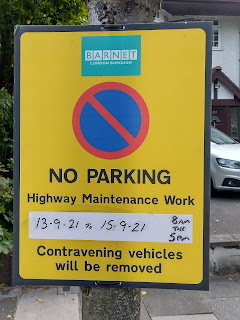 This sign, numerous example of which were erected in Hampden Way, at the very edge of Barnet, also repeats the 'No parking' error. More likely than not, contravening vehicles will be relocated not removed. This doesn't look like an approved sign to Mr Mustard. He hasn't emailed the Parking Manager much recently, time to do so.

Update 28 September:Runnymede Council say this (not the pub then!) 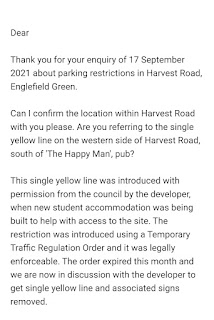