Mr Mustard doesn't get heavily involved in private parking charges as they can end up in the county court and he has no desire to spend half a day sitting around and he doesn't have audience rights without requesting them.
Sometimes though a friend wanders along with a demand which is so patently wrong and unreasonable that he has to put fingers, both of them, to keyboard.
Here are the images which were on the demand for £100

Let us call Mr Mustard's friend, Miss V. She was dropping her friend at the fracture clinic and then going back later to collect her, hospitals not liking extra people who aren't strictly necessary for medical or safety reasons, with the patient. Accordingly there were two or more other unseen photos both at around the same time as the two which were selected, which didn't prove that anyone was in any car park, staff or otherwise, for 1 hour and 52 minutes, Miss V (and her car) being safely at home enjoying a cup of tea and a read of the newspaper whilst she waited for a phone call.

Mr Mustard posted this letter off in the name of Miss V on 16 March. 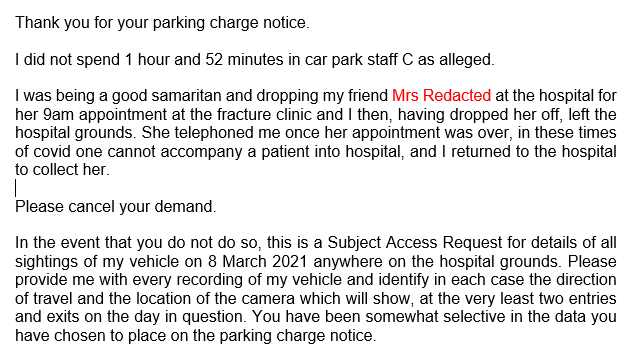 Fast forward two days and Parking Eye have slammed the ANPR into reverse. 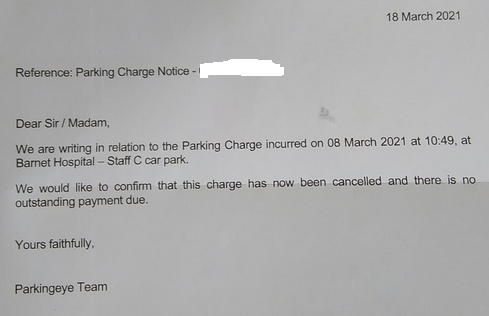 Their willingness to immediately cancel points to the veracity of the facts, there being two visits, not one and thus the alleged breach of contract did not take place and no parking charge was due.

If the same has happened to you, follow Mr Mustard's lead and demand all of your data. The interest of Parking Eye in your wallet or purse may rapidly wane.

ANPR is only as good as the way in which the data has been manipulated, clearly disgracefully in this instance in a one sided manner to suit their purpose of revenue raising.