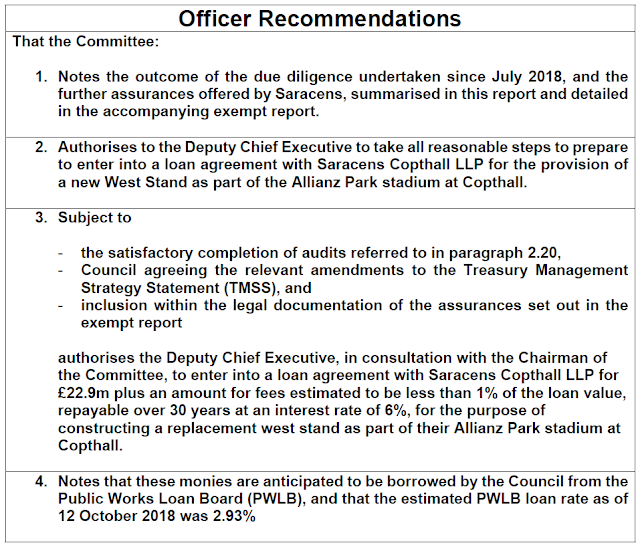 Having read the entire committee paper which was introduced by the above recommendations, Mr Mustard had a few questions to ask of the committee. He will now set out the words which caused him to ask questions and the responses, such as they were.

As you see the answer is top secret, so presumed to be inadequate. What Mr Mustard wanted to know was how admission fees & other income paid to Saracens Ltd were going to be ring-fenced so that they weren't used to pay any other costs. A simple statement that the answer is in the exempt report isn't an answer at all.

Mr Mustard wanted to know who was providing a loan guarantee so he could assess if they were good for £22.9m or not. We don't know.

In the absence of an answer there is no public evidence that the loan guarantees are satisfactory.

Given the scale of the transaction it isn't unreasonable for the public to be told who is guaranteeing 44% of the loan. Who cares about the other 56%? not the council. None of the questions look like they should have exempt answers, having been carefully worded so as not to ask for specific numbers.

It is of no comfort to be told nothing at all.

Without knowing if the estimated (synthetic) credit rating is on, say £1,000 or £1,000,000 it isn't of any value. Assessments were not sought from the three credit rating providers who are specified in the Treasury Management Strategy. Clearly the council have cast about for some crumb of good news they could put in the report.

It concerns Mr Mustard that the shareholders are not legally obliged to make good any losses of Saracens Ltd. This makes the assurances almost worthless and the moving around of debits and credits doesn't really matter as losses will still be incurred. What matters more are the accounts of Saracens Copthall LLP (SCLLP). 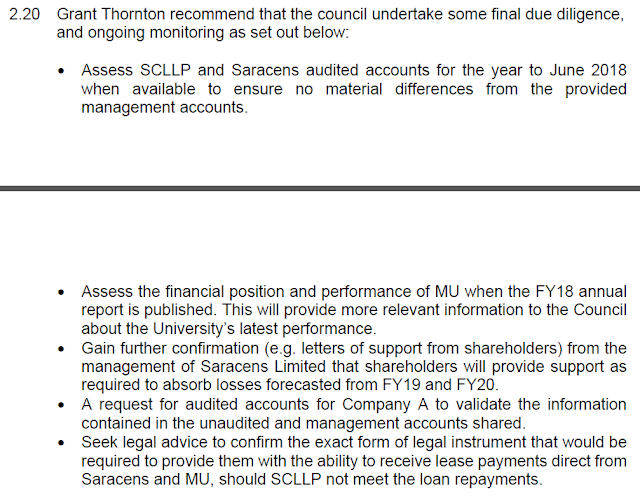 Mr Mustard had seen recommendation 3 but the meeting could have amended it. The Audits may get brought forward this year by Saracens.

Of course Saracens have got a costed build plan in place otherwise they wouldn't know the cost of the stadium or the expected completion date. This information should not have been exempt.

It looks to Mr Mustard that instead of matching the borrowing and the loan for the entire 30 year term the council are going to juggle their needs in the hope of saving a few quid. There is the risk that rates will rise, or that public borrowing will become harder to obtain, and then extra costs could be incurred. If they were to nail the PWLB loan in place at the same time as they lend out they would eliminate any timing and capacity risks.

Even the council, before they have lent Saracens a single penny, have doubts about the repayments starting on time. Mr Mustard worries that this loan might be made on an interest only basis. 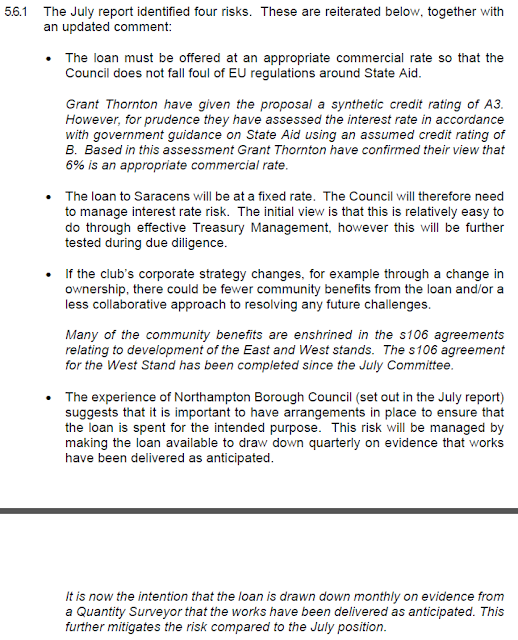 The July report was wholly inadequate to identify just four risks. The council were not at all forthcoming and Mr Mustard doubts that they have thought this through at all. They aren't however, gambling with their own money but yours and mine, the council tax payer.

If this was a bank doing the due diligence and taking the proposed loan to the credit committee, it would be much more thoroughly researched, every possible negative item would have been documented and stress tested and in all probability the loan would have been refused. Oh wait;

Despite the minimal facts in the answers Mr Mustard will keep on asking the difficult questions because unless he and other members of the public do so even more doubtful ventures will come into being.

Mr Mustard
Posted by Mr Mustard at 9:32 am